Nestled at the base of the famed Winter Park Resort, this seasonal stop is served by the Amtrak Winter Park Express, which offers direct service to Denver Union Station during the popular winter sports season. 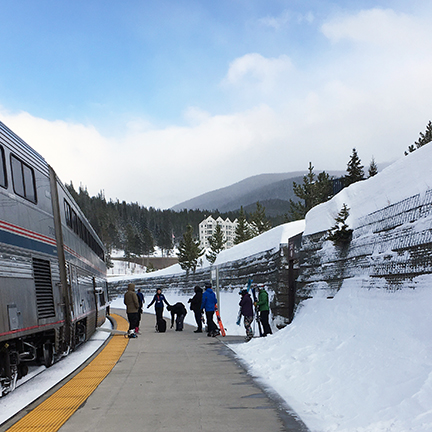 The Winter Park station, which consists of an accessible concrete platform, is open for the popular winter sports season from January through March. It is served by the seasonal Amtrak Winter Park Express, which connects the Winter Park Resort to Denver Union Station on weekends. This famed Rocky Mountain ski destination borders the Union Pacific (UP) tracks, making the Amtrak Winter Park Express the only train service in the world to deliver customers directly to the base of a ski resort. Commuter rail from Denver International Airport to Union Station means visitors from throughout the country and across the globe may travel from their flight to the Winter Park Resort without having to rent a car, secure a shuttle or navigate mountain roads.

The Amtrak Winter Park Express covers a portion of the route traversed by the California Zephyr (Chicago-Denver-Emeryville) that stops daily in nearby Fraser. Directly east of the Winter Park station is the western portal of the Moffat Tunnel, a railroad and water tunnel that cuts through the Continental Divide. Named after Colorado railroad pioneer David Moffat, the tunnel’s first railroad traffic passed through in February 1928. Prior to the tunnel’s construction, Moffat’s Denver, Northwestern and Pacific Railway crossed Rollins Pass with a series of switchback loops and steep grades. The labor and cost associated with frequent snow removal made this original route unprofitable.

Dedicated ski train service that had connected Denver and the Winter Park Resort for nearly seven decades came to an end in 2009. Responding to local interest and seeing a potential growth opportunity, Amtrak coordinated with UP and the resort to organize a one-day excursion in March 2015, which grew to two round trips after the first one sold out in four hours. Working together, the project partners inaugurated the seasonal Amtrak Winter Park Express on Jan. 7, 2017.

Winter Park Resort took the lead on building a permanent, heated, accessible platform to accommodate passengers. Completed in December 2016, it was funded by a $1.5 million grant from the Colorado Department of Transportation, a $100,000 grant from the city of Denver, a $100,000 grant from the town of Winter Park, $1,000 from the Colorado Rail Passengers Association, and the remainder from the resort. Infrastructure improvements were also made at the UP siding in Fraser – together with the platform, the overall project cost approximately $3.5 million.

Winter Park Mountain first opened in 1940 and accommodated weekend skiers and summer vacationers. The area became developed in the early 1970s and the village of Winter Park became incorporated in 1978. Winter Park Mountain is home to the National Sports Center for the Disabled, one of the largest recreational and therapeutic skiing programs for people with disabilities.

*The Amtrak Winter Park Express did not operate in Fiscal Year 2021.