Culpeper became a crossroads for regional commerce when the first depot opened in 1852. The current building, erected in 1904, served a vibrant community until the 1970s, but was in need of serious repair a decade later. As plans got underway, it became the symbol of broader downtown revitalization efforts.

Today, the Culpeper depot once again serves as a crossroads – a busy train station served by Amtrak, hub for tourists stopping by the Visitors Center, host to cultural events and future home of the Museum of Culpeper History. 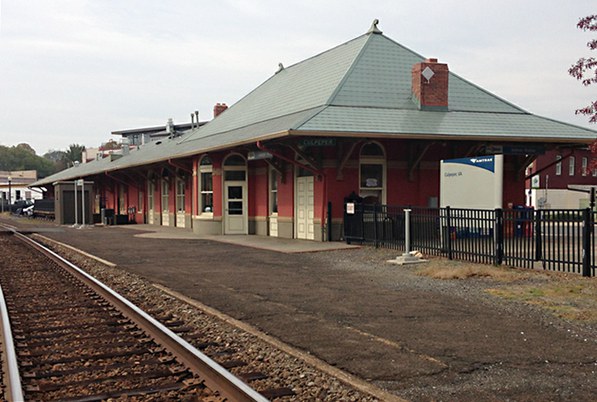 Norfolk Southern Railway’s request to demolish a portion of the depot in 1985 galvanized local government, citizens and businesses to work together to save and restore the historic building, while also prompting these partners to think about wider community renewal. The town of Culpeper subsequently established a historic district covering most of downtown.

In 1995, CRI and the town successfully won a $700,000 Transportation Enhancement grant from the Virginia Department of Transportation to fund a phased depot rehabilitation project. Three years later, Norfolk Southern Railway officially transferred the building deed to Culpeper, thereby allowing the project to move forward. Phase I, completed in 2000, resulted in the reopening of approximately one-half of the depot to accommodate rail travelers and house the Visitors Center. Phase II wrapped up in 2003, transforming the old freight section into a conference and event space that could be rented for meetings and social events.

“The renovation of the depot not only provided an attractive train station for passengers, but more importantly it proved to be a catalyst for the revitalization of a dilapidated and run down block of East Davis Street.” – Culpeper Mayor Calvin L. “Chip” Coleman

Station as a Destination

Since 2003, the Culpeper depot has reasserted its role as the center of downtown and has also blossomed into a destination of its own. The Commonwealth ofVirginia, Amtrak and Norfolk Southern supported this growth through the 2009 extension of a daily roundtrip Northeast Regional train to Lynchburg.

In 2011, Culpeper installed its first public arts project, Reel LOVE, at the depot. Using a grant from the Virginia Tourism Corporation, the tourism office worked with a local artisan to create the sculpture from film reels. It highlights the area as a film and cultural center, and is home to the Library of Congress Packard Campus forAudio-Visual Conservation and the newly renovated State Theatre. Today, city tourism officials note that Reel LOVE is a popular backdrop for photos and has even been the site of a few marriage proposals.

Thirteen thousand people stopped by the depot Visitors Center in 2012 to learn about local attractions. The depot also hosts an array of exciting outdoor events,and in 2014 will become the new home of the Museum of Culpeper History, alongside Culpeper’s Tourism Office and Visitors Center.

Since 2009, the extended Lynchburg rail service has brought more visitors to Culpeper to enjoy award-winning restaurants, unique shopping, and film and theatrical events. It provides a convenient one seat ride to Washington, New York, Boston and points in between, increasing the city’s appeal as a convenient getaway for residents of the greater Northeast.

Thank you to Lori Sorrentino and Kristi Mashon of the Culpeper Department of Tourism for their assistance with this case study.