A Lower Downtown landmark, Union Station was recently renovated to serve as a regional transit hub and the center of a new mixed-use neighborhood. 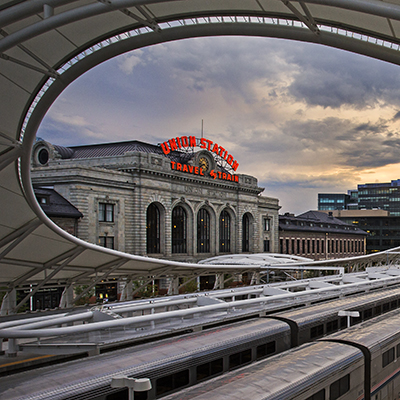 Amtrak returned to historic Denver Union Station in time for the evening arrival of the eastbound California Zephyr on Friday, February 28, 2014. Three years earlier, Amtrak moved to a nearby temporary facility to accommodate the renovation of Union Station, excavation of an underground bus concourse and construction of a new Train Hall containing tracks and platforms to be used by Amtrak and the future commuter rail system. The Train Hall, just west of the historic building, features a soaring white fabric roof with curving forms; lighted from within at night, it becomes a glowing Lower Downtown landmark.

In addition to service provided by the California Zephyr (Chicago-Denver-Emeryville), Denver Union Station is a terminal for the seasonal Amtrak Winter Park Express. Running from January through March, the Winter Park Express offers weekend service between Denver and the Winter Park Resort. The famed Rocky Mountain ski destination borders the Union Pacific (UP) tracks, making the Winter Park Express the only train service in the world to deliver customers directly to the base of a ski resort. Clocking in at two hours each way, the train allows customers to enjoy a comfortable ride, while avoiding traffic on nearby highways.

The Regional Transportation District (RTD), a regional authority operating public transit services in eight counties in the Denver metropolitan area, purchased the Union Station site in August 2001. The Denver Union Station Project Authority is responsible for the financing, acquiring, owning, designing, constructing, renovating, operating and maintaining the Denver Union Station redevelopment project. The Authority is a partnership of RTD, the City and County of Denver, the Colorado Department of Transportation, the Denver Regional Council of Governments and the Denver Union Station Metropolitan District. Together, these entities developed a master plan for the station and its surrounding 19.5 acres that envisions the station as a hub for a new mixed-used neighborhood including retail, office, residential and cultural uses.

The Union Station Neighborhood Co., a partnership between developers Continuum Partners and East West Partners, was selected to be the master developer in charge of overseeing the $519 million construction and renovation effort at historic Union Station. With the work completed under FasTracks, the station has become a hub for light rail, commuter rail, intercity buses, an extension of the 16th Street Mall Shuttle and regional, express and local buses. There are also facilities for cyclists, as well as pedestrian-oriented improvements such as landscaped public plazas that better integrate these transit services with adjacent neighborhoods. The Union Station light rail station opened in August 2011; the 22-bay underground bus complex opened in May 2014; and rail service to Denver International Airport launched in 2016.

As part of the redevelopment, Union Station includes a dozen new shops and restaurants to serve travelers and residents. The Crawford Hotel, which opened in July 2014, includes 112 rooms installed in the upper levels of the north and south wings; the station’s “Great Hall” serves as the hotel lobby. The RTD is pursuing a Leadership in Environmental and Energy Design (LEED) Silver Star certification for the Union Station rehabilitation project by incorporating sustainable features into the new construction.

The first Union Station was built in 1881 at a cost of $525,000 to serve the Denver and Rio Grande; Denver, South Park and Pacific; Colorado Central; and Union Pacific railroads, which had previously maintained separate facilities. In 1894, the building, constructed of pink-grey rhyolite with pink sandstone trim, was seriously damaged by fire. Although the wings were renovated, the central portion of the station was rebuilt in a more fashionable Romanesque style with a tall clock tower. Van Brunt and Howe, a well-regarded Kansas City architecture firm, completed the work. Due to an increase in passenger rail traffic, the station was expanded twenty years later by once again replacing the center block.

The new section, completed in 1914, was designed in a grand neoclassical style by the Denver firm of Gove and Walsh. The architects clad the structure’s steel frame with rusticated and richly carved Colorado granite. A metal and glass marquee at the first floor protects passengers from inclement weather.

On the street and track facades, central recesses hold trios of two-story round arch windows flanked by end pavilions. The arches are embellished with scalloped designs and keystones in the form of scrolls with shields. The pavilions have central niches with decorative plaques bearing the dates “1881” and “1914” to mark the construction of the station’s two major sections.

Above the prominent cornice there are clocks on the two main facades for travelers who need to keep the train schedule in mind. Orange neon signs were later added over the clocks, proclaiming “Union Station—Travel by Train”; with time, they have become neighborhood landmarks in their own right. Inside, the large windows flood the old waiting room, now the hotel lobby, with natural light. Looking closely, one sees that the windows’ plaster arches bear approximately 2,300 carved columbine flowers—Colorado’s official state flower.

The city was established by prospectors on November 22, 1858, after a gold discovery. The founders of the town named it for James W. Denver, Governor of the Kansas Territory, of which Colorado was then a part. The Colorado Territory was established in 1861 and the city was incorporated on November 7, 1861. In 1865, Denver became the capital of the Colorado Territory, and in 1881 it was designated the permanent state capital.

Denver is nicknamed “The Mile-High City” because its official elevation is one mile above sea level. The city is particularly famous for the more than 200 parks within the municipal limits. It also owns and maintains 40,000 acres of mountain parks including the famous Red Rocks Park and the Winter Park Resort ski area.

In fall 2019, the “Moffat Loving Cup of Admiration” went on long-term display at Union Station through a partnership among History Colorado, a charitable organization and state agency offering access to Colorado’s history through cultural and heritage resources; the Crawford Hotel; and ColoRail, a statewide rail advocacy group.

The nearly three-and-a-half-foot tall silver Moffat Cup was presented in 1904 by Denver’s civic leaders to David Halliday Moffat, founder of the Denver, Northwestern & Pacific Railway (DN&P). Moffat planned to build a mainline railway from the Mile-High City west through the Rockies to Salt Lake City, where it could connect with railways to the West Coast. Leading Denverites recognized that Moffat’s proposition was risky and expensive – but would also connect the city to the nation’s growing rail network.

The DN&P was not finished until after Moffat’s death in 1911, and today one of its most famous sections – a 6.2-mile tunnel through the Continental Divide – bears his name. Amtrak customers pass through the Moffat Tunnel west of Denver. This engineering marvel, which first welcomed rail traffic in February 1928, made the original DN&P route via Rollins Pass obsolete. It had featured steep grades and a series of switchback loops, and winter weather meant frequent, labor intensive snow removal efforts.

The Moffat Cup, sculpted from nearly 200 pounds of pure silver and sitting on a dark green marble base, was created by the famed Gorham Manufacturing and Silversmiths. Its gleaming surface is etched with many scenes of the natural beauty that Amtrak customers encounter along the railroad, as well as a likeness of Moffat.

Amtrak Conductor Brad Swartzwelter, who is also a member of ColoRail, helped start a campaign in late 2018 to make the cup and its namesake better known to the public. After Moffat’s death, the cup ended up in the collection of History Colorado but had not been on display for many years. A small group representing ColoRail, the Crawford Hotel and History Colorado came together to discuss how the cup could be made accessible to the public. The Crawford Hotel offered a location in the majestic Great Hall, but there was no budget for building a secure, custom display case.

Swartzwelter spearheaded a fundraising effort on behalf of ColoRail that raised $14,000: $8,700 crowdsourced online from more than 60 donors and $5,300 through direct donations. The latter included Union Pacific Railroad, which today owns much of the former DN&P.