Woodbridge lies on the Occoquan River close to where it joins the Potomac River. The Georgian Revival style depot complete with clock tower is used by Amtrak and VRE commuter trains. 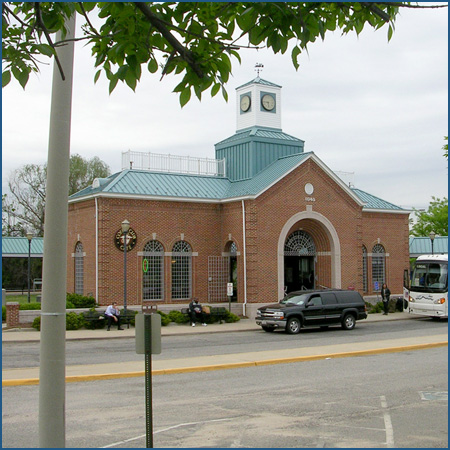 The Amtrak station in Woodbridge consists of a platform and shelter adjacent to the Colonial Revival depot, which opened in 1992 as part of the inauguration of the Virginia Railway Express (VRE) Fredericksburg commuter rail line. A two-story central clock tower rises over the blue-green metal hipped roof, keeping time for passengers entering the enclosed portico that extends toward the parking lot. Front- and back-facing double-bays of tall, arched Georgian-style mullioned windows provide ample natural light for those using the VRE ticket machines or visiting the coffee stand and newspaper racks. On the rear, a sheltering porch and roofed runway give open air access to the platforms, which have a long gabled canopy and seating.

The multi-level parking garage adjacent to the station provides more than 7oo spaces in addition to the ground level lot, which hosts a farmers market on weekends. In 2010, VRE added a platform on the west side of the tracks and an overhead pedestrian bridge to connect the tracks to the parking garage on the east side. This second platform was built to provide additional commuter rail capacity.

Europeans arrived on the western shores of the Potomac and its tributaries around 1608, when Captain John Smith explored the area and found a well-established Dogue village at the mouth of the Occoquan (“End of the Water”) River. By 1650, Europeans began patenting the lands in the region, and the town of Occoquan, on that river, was well established by 1760, having a tobacco warehouse and grist mill. The mill operated for 175 years until it burned. The town of Occoquan was officially laid out in streets in 1804 by Nathaniel Ellicot, James Campbell, and Luke Wheeler, who are considered to be the town’s founders. During the American Civil War, Occoquan’s post office passed packages and letters between north and south.

Woodbridge lies a few miles further downriver toward Belmont Bay and it can be surmised this Census Designated Place, which is also a post office and one of the Prince William County magisterial districts, originated at the intersection of State Route 123, a major regional road, and U.S. Route 1 in the post-war years. Primarily rural, Woodbridge was also the nearest major intersection to a U.S. military installation that opened in the 1950s on the Marumsco headland. The area remained lightly populated until, in the early 1950s, Cecil D. Hylton began developing in Prince William county, building homes, townhouses, apartment buildings and shopping centers. In the early 1960s, Woodbridge became a residential area of choice for nearby Quantico as well as a far exurb of Washington, D.C. and the more populous Fairfax County to the north.

In the late 1940s and up until 1951, the Occoquan commuter rail station served the area. However, that was closed and torn down, and the community had no rail service at all until VRE arrived in 1992. Today, Woodbridge and its surrounds are burgeoning communities and hundreds commute northward every weekday via rail, instead of joining the lengthy auto commute to and from city of Washington and its closer suburbs.