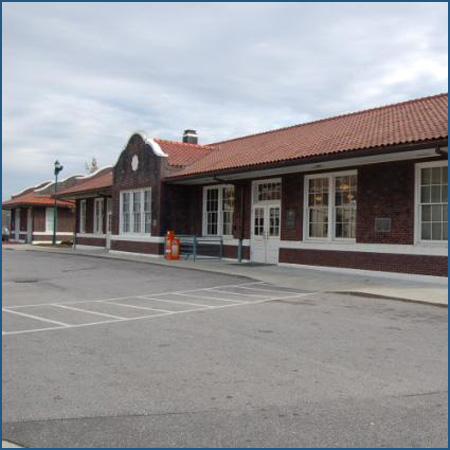 The Wilson Amtrak station was constructed in 1924 by the Atlantic Coast Line Railroad. Designed by A.M. Griffin in the Flemish style, this one-story brick building sports Spanish terra cotta roof tiles and an umbrella canopy that stretches the length of the station.

Though the station underwent major renovations by the turn of the 20th century, workers took care not to destroy the architecture of the building. The restoration took place in three phases. In phase one, the station was completely rebuilt and modernized while preserving and restoring the original architecture. A new platform in compliance with the Americans with Disabilities Act and canopy connecting the station with the platform were constructed, as well as a waiting room, baggage room, ticket office and vending area. The construction began in 1996 and was completed two years later. In phase two of the restoration process, the city and state added long-term parking facilities and enhanced the look of the station with the addition of some landscaping. Phase two construction was completed in 2003. Phase three involved canopy restoration. The entire renovation project cost about $3 million.

In 1999, a 19′ by 10′ mural for the station’s waiting room was completed. It was commissioned by the North Carolina Department of Transportation and painted by artist Michael Brown. The mural depicts 100 years of railroad history in Wilson.

Like many small towns in the 19th century, the railroad was the center of growth and prosperity for Wilson. In late 1839, the Wilmington-Weldon and Raleigh Railroad completed tracks that stopped through two stations: Toisnot Junction Station and Hickory Grove. The town of Wilson was born by joining together the town of Toisnot Junction and Hickory Grove. It was named for General Louis Dicken Wilson, a state senator and an early advocate of the public school movement.

Wilson, known as the City of Beautiful Trees, was incorporated in 1849 as a farm market. At the time, tar and turpentine were the primary cash products, with cotton growing in importance in the 1860s. After the Civil War, farmers found a better market in tobacco, and by the turn of the 20th century, Wilson became the world’s largest bright leaf tobacco market. Wilson is also home to Imagination Station, an imaginative science learning center for children.

The Carolinian service is financed primarily through funds made available by the State of North Carolina.