Within walking distance of Colonial Williamsburg, the historic brick depot was constructed by the Chesapeake & Ohio Railroad in 1936. It features a steep gabled roof and classical portico. 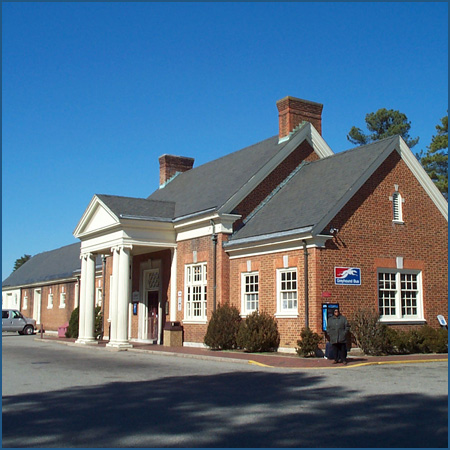 The Williamsburg Transportation Center, which lies just to the north and west of Colonial Williamsburg, is a Colonial-revival station built in light brick. The Chesapeake & Ohio Railroad constructed nine stations of this style in the early 20th Century. The original Williamsburg station, built in 1907 was replaced in 1936 with the current larger structure of the same style, approximately ½ mile to the west.

This replacement was in response to John D. Rockefeller’s restoration of Colonial Williamsburg. An open double-columned classical portico trimmed in white shelters the entrance to the single-story station. The body of the strongly symmetrical building has a chimney at each side of its steeply side-gabled roof, with double-bay wings on each side; the symmetry is broken by the longer west wing. The original eastbound train shed, which connects to the station structure remains in use today. Originally, there was a double-track mainline complete with a westbound train shed. This structure was removed after the railroad moved to a single-track operation.

Inside, the mellow, pale, glazed brick walls and dark walnut wood of the doors, window trim and arched ticket window combine with the high ceiling to create a peaceful waiting space. Historic photographs of famous visitors adorn the walls, and the tall windows contribute to the intentionally antique feeling of the place. When the city purchased the station in 2000 from Colonial Williamsburg, it hired the architectural group of Guernsey Tingle to renovate and restore the facility.

The center has been divided into three sections: the Amtrak waiting room and offices occupy the east portion of the building; bus and car rental offices, which are new, are located in the larger west wing, formerly the freight rooms; the two are separated by a vending and restroom area which also has tourist information. Greyhound and Trailways bus lines operate out of the west side, along with local transit and taxi services. The renovation project, completed in 2002, also created satellite parking for long-term passenger parking. A Transportation Enhancement Grant contributed $550,000 to the $1.31 million project, the remainder supplied by the city of Williamsburg.

English settlers of the Virginia Colony arrived on the Virginia peninsula with the establishment of nearby Jamestown in 1607, and they found themselves in heavily-forested and low-lying tidewater already populated by the tribes of the Powhatan Confederacy, some of whom resisted their settlement, while others married into it. Two streams, Queens Creek and College Creek, one running into the York River and the latter into the James, nearly meet at a point about midway on the peninsula at a high point where the tidewater begins to rise to the rolling piedmont. Due to continuing strife with the natives, around 1634 the Virginia settlers built a palisade approximately six miles long across that relatively high ground so that they could defend their peninsula, so-claimed. The fortification led to the creation of Middle Plantation at that central location on the rising ground, and periodically the government moved up there from Jamestown due to fires destroying the statehouse. The climate at Middle Plantation was also less muggy and mosquito-ridden than that of low-lying Jamestown.

The Virginia colonists had long felt the need for a school of higher education, and at the end of the 17th century they sent Reverend James Blair back to England, where he successfully secured a charter for the College of William and Mary. The school was founded at Middle Plantation in 1693, and construction of the first building began immediately thereafter. The rebuilt Jamestown State House burned down again in 1698, and this time the colonial capital was moved permanently, following a petition to the House of Burgesses from the residents around the new college. A village was laid out next to the college and the new capital named Williamsburg, after King William III of England, befitting its elevated status.

Immediately following its designation as the capital of the Virginia Colony, plans were made for a new capitol building, which was built by Henry Carr, who also had charge of constructing the Wren Building, the oldest at the college. The H-shaped building was completed in 1705.

Not only being the seat of government of the wealthiest of the English colonies, Williamsburg also became the political, cultural, and educational center for Virginia. As such, the city is storied as the site of much of the important development of American democracy by patriots such as Thomas Jefferson, Patrick Henry, George Washington, George Mason and Peyton Randolf. Near the end of the American Revolutionary War, through the influence of Thomas Jefferson, the seat of Virginia government was moved to the more centrally-located and safer city of Richmond, the peninsula being seen as vulnerable to attack. The capital building was last used as a capitol on December 24, 1779, when the General Assembly adjourned to reconvene May 1 at the new capital, Richmond. For nearly a century and a half afterward, Williamsburg remained a quiet college town in a predominantly rural district.

However, during the Civil War, Williamsburg saw battle during the extended Peninsula Campaign, where General George McClellan’s Union forces attempted to take Richmond from the east. Local forces and those led by General James Longstreet and supported by J.E.B. Stuart’s cavalry blocked the Union’s westward progress at the Williamsburg Line. At the Battle of Williamsburg on May 5, 1862, defenders succeeded in delaying Union forces long enough to allow a retreat west to Richmond—and Williamsburg fell to the Union, which occupied the town through the end of September of 1865.

In the 18th century, transport depended much on waterways; Williamsburg not being within easy reach of one, it never grew as a trading center. But in 1881 the railroad finally came. Collis P. Huntington’s Chesapeake and Ohio (C&O) Railroad built the Peninsula Extension through Williamsburg, and the tracks were even placed down Duke of Gloucester Street—the main street of the town. The tracks even went directly through the ruins of the old capitol building, which had burned in 1832 and the bricks removed for reuse over the years until nothing remained in the spot. The railroad provided much-needed freight transport for the farms of the region, although the C&O’s main business was certainly shipping coal to the port at Newport News.

Meantime, the college, which had suspended classes during the Civil War, saw them suspended once again from 1882 to 1886 for financial reasons. The college’s president at the time sought funding from both Congress and the state of Virginia. After 1886, the college became a state school, and classes resumed.

This sleepy rural town began to change when Dr. William Archer Rutherford Goodwin became rector of Williamsburg’s venerable Bruton Parish Church in 1902. The energetic native of Nelson County, Va., soon led a successful campaign to restore the historic church building, which was completed in time for the 300th anniversary, in 1907, of the founding of the Anglican Church in Virginia.

The Church transferred Goodwin to upstate New York for a time, but he returned to teach at William and Mary in 1923. Seeing further deterioration of the colonial era buildings both saddened and inspired Goodwin to build on his successful restoration of Bruton Parish Church, of which he became pastor again in 1928. Fearing that most of the structures that had seen the founding of the nation would soon crumble under the weight of age and decay, Goodwin took the opportunity to approach fellow Phi Beta Kappa member and philanthropist John D. Rockefeller when he happened to stand in for a friend in making a speech in New York.

At first Goodwin could not interest Rockefeller in the restoration project; but after Henry Ford turned him down, he took another opportunity to discuss this when Rockefeller and his wife and five sons worked Williamsburg into a trip to the Hampton Institute in March of 1926. Later that year, when attending the dedication of Phi Beta Kappa Hall at William and Mary, Rockefeller took a midnight stroll through the town after speaking with Goodwin again, and made up his mind to work on Goodwin’s project.

Rockefeller gave the project his personal leadership until his death in 1960. He funded the preservation of more than 80 of the original structures, the reconstruction of many buildings, and also the construction of extensive facilities to accommodate the visiting public. At first, Rockefeller began purchasing the run-down properties in secret, using Goodwin as his agent, the two communicating in coded telegrams—done to keep from having the prices jacked up. The town was finally informed in 1928 and fortunately, objections were minimal. Restoration eventually encompassed 85 percent of Williamsburg’s original 18th-century area. More than 700 buildings post-dating 1790 were demolished in the process, and almost as many reconstructed. As part of the restoration, the railroad tracks were moved from the center of town and the current station built; and the colonial capital building reconstructed.

The intent of the project was to create a shrine to history and beauty: “Modern windows will open on vistas stretching through the distance into the past,” Reverend Goodwin declared in his writings documenting the restoration. His and Rockefeller’s vision stressed the importance of educating the public in the American ideal as well as American history. Through the architectural firm of Perry, Shaw & Hepburn and Arthur Shurcliff as chief landscape architect, Rockefeller and Goodwin applied passionate attention to detail in their restoration efforts. Furnishings, houses and gardens were copied as exactly as possible.

.Williamsburg has seen a number of notable events and visitors since its inception, including visits from Winston Churchill, Queen Elizabeth II and the Crown Prince of Japan, as well as many American presidents and almost 100 million visitors, both foreign and American . The ninth G7 Summit met in Williamsburg to discuss the debt crisis, arms control and greater cooperation with the Soviet Union in 1983. Williamsburg began to be included, with Jamestown and Yorktown, as a stopping-off point on tours for foreign dignitaries.

Attendance met an all-time high in 1985, but has dipped following the events of September 11, 2001. While still focused upon American ideals and history, Colonial Williamsburg now seeks to present the lives of average men and women who lived in the time as well as the luminaries of the day. The historical landmarks, once static museum pieces, are now sets in an ongoing drama. The notable Abby Aldrich Rockefeller Folk Art Museum in Williamsburg has expanded to electronic classrooms for students. The locale also supplies other entertainments besides the historical and educational, such as nearby Busch Gardens, Water Country USA, spas and golf courses to round out modern vacation choices.