A soaring neoclassical masterpiece designed by famed architect and planner Daniel Burnham, Union Station was a key element in a City Beautiful plan to remake the nation's capital. 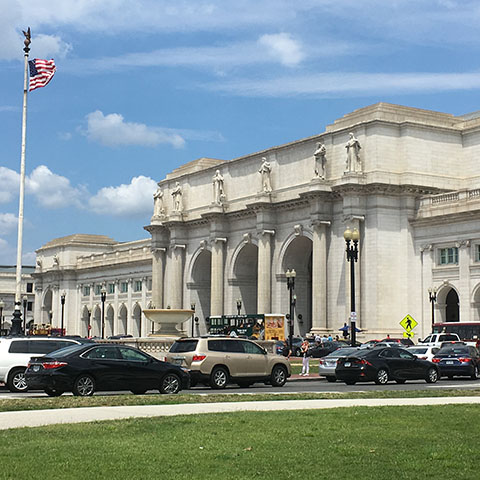 The District of Columbia was established in 1791 as a Congressionally-designated federal territory, a location for the nation’s capital that would take up a diamond-shaped ten mile-by-ten mile tract where the Anacostia River flows into the Potomac River. That original tract, made up of land from Maryland and Virginia, included the existing communities of Georgetown, Md., and Alexandria, Va. The federal government moved from Philadelphia to Washington in 1800.

Designed by Major Peter Charles L’Enfant, a Frenchman who had come to know George Washington during the Revolutionary War, the capital was one of the first planned cities in the new nation. Important government buildings, such as the Capitol, were sited on prominent rises in the land. Even with 200 years of growth and change, including the burning of the city by British forces in August 1814, L’Enfant’s symbolic and innovative vision for the capital of a new nation has survived remarkably intact.

In 1901, the U. S. Senate Park Commission invited master American architect and planner Daniel Burnham to orchestrate a sweeping City Beautiful plan for Washington, D.C., and make it a setting that was both practical and grandly befitting a world capital. Burnham’s work, inspired by that of L’Enfant, would help create the monumental architecture now associated with the National Mall. As part of this work, Burnham designed a Union Station that removed the rail lines from the center of the Mall, which had become a tangle of paths, gardens and buildings, and brought two major railroads, the Pennsylvania and the Baltimore and Ohio, into one terminal.

Completed in 1908, the station inspires visitors with its exquisitely detailed neoclassical architecture. Although faced with Bethel white granite from Vermont on the exterior and interior, the building’s bones are modern concrete and steel. The front of the station, on Columbus Circle, presents travelers with a soaring vaulted entryway and heroic statuary on its 600-foot length. The 96-foot high Main Hall coffered ceiling shines brilliantly with gold leaf and reflects natural light entering from the large Diocletian windows.

The former Main Concourse, now the heart of the station, lifts its barrel-vaulted glass and coffered plaster ceiling 45 feet above the main floor and stretches 760 feet long. It was once said to be the largest single room in the world. When the building first opened, it also featured a private, secure waiting room for the president and his visitors, as well as a public dining room whose walls were covered in murals modeled after those recently excavated at the ancient Roman cities of Pompeii and Herculaneum.

More than 100,000 visitors pass through Union Station each day, including passengers using Amtrak, Maryland Area Regional Commuter (MARC) rail and Virginia Railway Express (VRE), Metro subway trains and buses, taxis, tourist buses, intercity buses and Capital Bikeshare. The building is also a popular shopping and dining destination for residents of the Capitol Hill neighborhood, and the city at large. Behind the station, above the train sheds, stands a parking structure offering approximately 2,500 spaces. The station, bringing all these modes of transportation together, makes it easy for people to move from private automobile to Amtrak to taxi or from commuter rail onto the subway and still have time to buy a meal, a gift, or a cup of coffee on their way.

The station has evolved through a vivid history of bustling use during its early years, to a period of decline, to a three year, $160 million restoration completed in 1988 that is still cited as one of the nation’s most successful examples of adaptive reuse through a private-public partnership. Coordinating this effort was the Union Station Redevelopment Corporation (USRC), a non-profit organization created in 1983 to preserve and restore the station’s historic and architectural significance, preserve its long-term function as a multi-use transportation center and enhance the retail and amenities.

Key improvements undertaken during the 1980s rehabilitation project included introduction of a mezzanine level within the Concourse that provided expanded retail opportunities; creation of a food court in the basement; the addition of dedicated areas for Amtrak seating and signage; restoration of the floors in the West, East and Main Halls; restoration of exterior walls, doors, and windows; upgrades to the exterior lighting; and installation of a public elevator to connect all three levels of the station.

Following a rare 5.8 magnitude earthquake that shook the Washington region in August 2011, damage was discovered in the Main Hall ceiling. Over nearly three years, each of the room’s five bays received plaster repairs, fresh paint and new gold leaf. Above the ceiling, a new steel support system was installed for the plaster, along with improvements made to the ventilation system and worker maintenance access. The completed ceiling was unveiled in late spring 2016.

Work was overseen by the USRC, and project financing was aided by a grant awarded to the National Trust for Historic Preservation, and gifted to USRC, from the American Express Foundation. The $350,000 grant assisted in funding the re-gilding of the ceiling in a higher quality, 23 karat, 18 gram weight gold, which increased the life expectancy to 75-100 years.

Concurrent with this work, two major changes were made to the Main Hall’s layout: removal of the Center Café, which included a second level on a raised platform, and two fountains (later converted into landscaped planters). Both elements had been added during the 1980s rehabilitation and were not original to the station.

In January 2019, Amtrak issued a Request for Qualifications to begin a two-phase process to select a contractor to modernize the Claytor Concourse, Union Station’s intercity passenger and commuter rail pathway. Construction is expected to begin in the fall of 2019 and is anticipated to be completed in 2022. Amtrak is working in coordination with multiple stakeholders, including the U.S. Department of Transportation, FRA, USRC, and commuter and transit partners.

Built in the 1980s, the Claytor Concourse on the north end of the station contains waiting areas for Amtrak customers, retail and food establishments, and customer amenities, such as restrooms. Amtrak will expand the concourse to double its capacity, which will alleviate congestion and enhance customer comfort and accessibility. Connectivity will be improved to provide customers better access to the commuter rail and bus transportation that serves the station. The project will also brighten the space with new architectural finishes and more natural light. Other project work calls for the addition of more restrooms and the construction of a new Metropolitan Lounge (currently ClubAcela), a premium lounge space providing Amtrak customers with a high-quality experience.

In summer 2020, Skanska USA Civil Northeast was awarded the Track 22 Reconstruction Project at Washington Union Station. Under the contract, Skanska will rebuild the lower level platform, rehab and restore the historic columns, and construct a new covered walkway to provide customer access to the platform via a new elevator, escalator and stairs to the station. The track was previously used as a storage track for equipment with no access for customers.

Amtrak received a $19 million grant from the FRA to fund a portion of the construction project that will increase track capacity for revenue trains for Amtrak and VRE. Revenue train service to Track 22 is anticipated to begin in 2022.

Today the station, which is larger than the U.S. Capitol, is the number one destination for visitors to Washington, D.C. It houses an indoor mall in the former Main Concourse, with many shops and kiosks throughout the station, providing ample space to meet, greet and shop. There is more than 210,000 square feet of retail space, including full service restaurants and small eateries providing quick meals. Amtrak maintained its corporate offices at the station from 1988 until late 2017. Since its re-opening, Union Station has hosted a large variety of cultural and civic events, presidential inaugural balls, free concerts, art and photography exhibits, and many other activities.

The Washington Union Station 2nd Century plan is a comprehensive improvement initiative comprised of multiple projects that seek to triple passenger capacity and double train capacity by modernizing and expanding station facilities over the next 20 years. The 2nd Century plan is informed by the 2012 Master Plan which set a vision for both near- and long-term growth goals for the station. More than 37 million passengers, tourists and shoppers pass through Washington Union Station every year – making it the third most visited tourist destination in the world. With its success has come challenges as the station has reached its capacity at peak travel times, resulting in long departing queues, overcrowding and visible passenger frustration. In addition, the station’s platforms to do not meet modern design standards.

To address these issues, the 2nd Century plan seeks to unlock capacity at Union Station by potentially adding several new lower-level concourses, multiple new entrance points, wider platforms and the addition of new passenger amenities and retail space. Unlocking capacity constraints at Union Station is critical to operations along the Northeast Corridor as it is the busiest station for MARC commuter service and Metro riders and the second busiest for Amtrak.

The 2nd Century plan will also integrate a new transit-oriented urban neighborhood known as Burnham Place. This three million square-foot mixed-use development over the existing rail yard will be developed by Akridge. The development will be a vital economic driver for the D.C. region as it will reconnect the urban fabric of the station’s adjacent neighborhoods including NoMa, Capitol Hill and the H Street Corridor. Burnham Place will feature retail, hotel, office and residential space – all interspersed with open public spaces including a green linear park connecting pedestrians and bikers north to Maryland.