Located at the head of Commencement Bay, Tacoma was chosen to be the western terminus of the Northern Pacific Railroad. It subsequently grew into a major North American port. 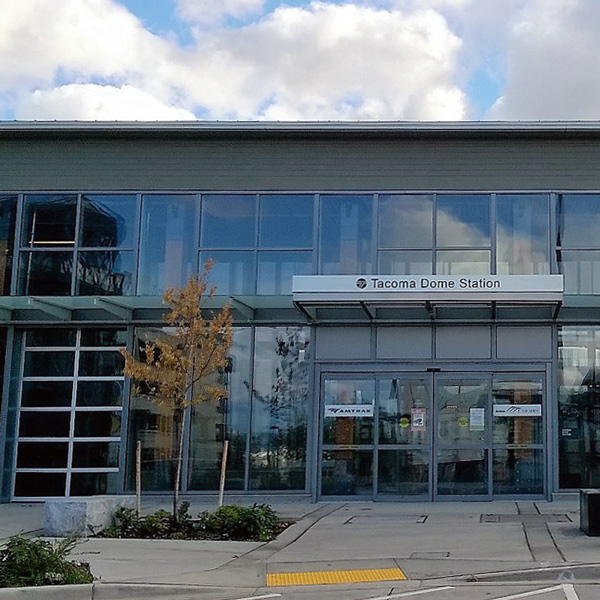 Amtrak moved into the new Tacoma Dome Station in the historic Freighthouse Square in the city’s Dome District on Nov. 18, 2021. This modern station replaced an older structure located about one-half mile to the northeast and was built as part of the Point Defiance Bypass Project.

An arcade connects the station to the rest of popular Freighthouse Square, noted for its art galleries, specialty shops, restaurants and events spaces. The three-block-long green building has been a city landmark for more than a century. It was originally completed in 1909 as the western freight terminus of the Chicago, Milwaukee and St. Paul Railway – known as the “Milwaukee Road.” That same year, through its subsidiary – the Chicago, Milwaukee and Puget Sound Railway – the Milwaukee Road had completed a 2,081-mile line from South Dakota to Washington State. The “Pacific Extension” transformed the Milwaukee Road into a transcontinental railroad stretching from Chicago to Seattle.

The project, which commenced in late 2014, was the final piece of the overarching Cascades High-Speed Rail Program. Funded largely through $800 million in federal high-speed rail grants under the American Recovery and Reinvestment Act, it was designed to deliver incremental and critical rail infrastructure improvements for emerging high-speed rail service, expand travel choices and foster economic growth in Washington State.

The Tacoma Dome Station is the third facility used by Amtrak in the city since it began operations in May 1971. Amtrak originally served Tacoma Union Passenger Station on Pacific Ave., noted for its impressive 90-foot-high central dome that has become a defining city landmark. A fine example of Beaux-Arts architecture completed in 1911, the building was designed by the firm of Reed and Stem, which was also responsible for the earlier Seattle King Street Station.

Clad in copper and adorned with cartouches, the dome rests on a central pavilion with large arched openings on either side. The reinforced concrete exterior is faced with multi-colored red brick set in a Flemish-bond pattern with a limestone base and ornamental detail. The entrance doors, of stained oak with bronze hardware, are recessed within the arch on the western elevation. A large window fills the arch above the doors. Tacoma Union Passenger Station was placed on the National Register of Historic Places in 1974.

From 1990 to 1992, the building was rehabilitated to serve as part of a federal courthouse complex. The rotunda now houses a collection of glass by renowned Tacoma artist Dale Chihuly. Suspended from the ceiling, a 20-foot blue chandelier is made up of more than 2,700 hand-blown glass globes. The station and its surrounding historic district have served as a focus for downtown revitalization since the 1990s.

In 1984, Amtrak moved about a mile southeast to a new, smaller station that was easier to maintain and better sized for the then-number of daily passengers. It was built to an Amtrak standard design used at locations across the country. The one-story building was composed of variegated brown brick with a prominent cantilevered roof of black metal; the deep eaves provided protection from inclement weather. Large floor-to-ceiling windows allowed light into the waiting room, while a small band of clerestory windows had the visual effect of making the roof float above the structure, lightening the whole composition.

The area that became Tacoma, at the head of Commencement Bay, has been occupied for many centuries, primarily by the Puyallup people prior to European settlement. The name, “Tacoma,” comes from the Native American term for Mount Rainier, “Tacobet,” meaning “Mother of the Waters.”

At the close of the American Civil War, Job Carr, a land speculator and war veteran, built a cabin which served as the community’s first post office. Carr hoped to profit from the coming of the Northern Pacific Railroad, which in 1873 chose Tacoma as the western terminus for its transcontinental line across the northern United States. Tacoma was incorporated on Nov. 12, 1875. However, the railroad built its depot two miles south of Carr’s speculative development, but the two resulting communities grew toward one another and merged as the area boomed. The first passenger rail station was built in the 1880s and moved to the site of the present Union Passenger Station in 1892.

The city has been home to lumber and paper industries since its inception, including giants such as Weyerhaeuser—so much so that the city was known for its distinctive (foul) odor until in the late 20th century the paper mills reduced their sulfur emissions by 90 percent. U.S. Oil and Refining also operates an oil refinery on the tidal flats of the Port of Tacoma. Shipyards, especially since World War II, have also been major employers in the city.

Tacoma also hosts a major West Coast port that covers nearly 25,000 acres. In 2015 it formed a partnership with the Port of Seattle, and together they constitute one of the top five container ports in North America with strong trade connections to Asia and Alaska. In 2020, the ports handled about $66 billion in trade and more than 3.3 million TEUs (Twenty-foot Equivalent container Units).

Image courtesy of the Washington State Department of Transportation.