European-Americans began settling this part of the Shenandoah Valley in the early 18th century. Passengers use the former Chesapeake & Ohio Railway signal house built around 1886, while the depot has served various commercial purposes. 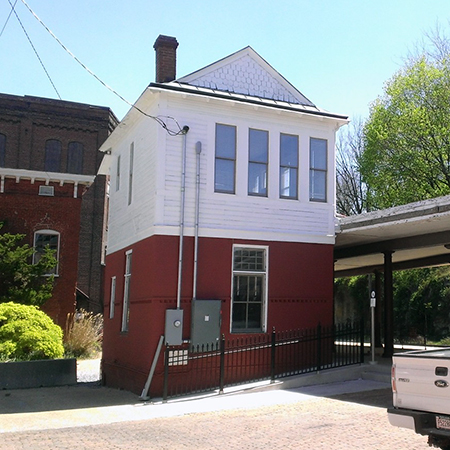 Customers at Staunton use a small unstaffed waiting room located in the former signal house built for the Chesapeake & Ohio Railway (C&O) circa 1886. Since the mid-19th century, three depots have served rail passengers at this site, located on a bend at the foot of Wilson Park and beside the now-underground Lewis Creek.

Staunton residents celebrated the arrival of the railroad in 1854 when the Virginia Central Railroad extended its line westward from Charlottesville and then continued to Clifton Forge. Staunton’s first depot, a one-story structure with hipped roof, was burned to the ground during the Civil War when Union Major-General David Hunter and his forces arrived in June of 1864. They cut the supply, communications and railway lines at Staunton – but spared the rest of the community. At the time, the town was an important supply center linking the Shenandoah Valley, a productive agricultural region, and Richmond, which served as the capital of the Confederacy.

Following the Civil War, the C&O was formed with the merger of the Virginia Central and the Covington & Ohio Railroad. The latter had been chartered in the early 1850s to build a line from Covington, Va., west of Clifton Forge, to a point on the Ohio River in what later became West Virginia.

The second depot, constructed in 1872 by the C&O, featured a two-story cross gable facing onto Middlebrook Ave. Typical of the period’s Victorian architecture, its clipped gables were inset with elaborate decorative scrollwork. A canopy wrapped around the building to protect passengers from inclement weather. The depot was damaged when a train wrecked into it in 1890. A decade later it was replaced by the third – and current – depot.

Designed in 1902 by noted architect Thomas Jasper Collins and his son Will Collins, the new building opened in April 1906 and features a hipped roof with wide eaves supported by decorative brackets. A separate baggage building was also constructed. South of the passenger station stands a red brick freight house dating to 1861; a wooden extension was added in 1904. It now houses a variety of businesses.

The passenger depot was used into the 1960s and then sat empty, falling into disrepair along with the rest of the station complex. A 1987 fire in the freight house almost led to demolition of all the rail structures until Vic and Linda Meinert of Atlanta bought the complex and decided to renovate it for commercial purposes. Their work was in part funded through federal historic preservation tax credits and was supported by the city, which undertook infrastructure improvements in the area, such as installing a new sewer line and rebuilding sidewalks. Wilson Park on the hill overlooking the depot was also cleaned up. The Historic Staunton Foundation provided technical assistance to support the rehabilitation. The passenger depot subsequently served as a restaurant for many years, and then a flexible wedding and events space until spring 2021.

The area in the Shenandoah Valley that would become Staunton was settled in 1732 by John Lewis and his family, followed four years later by wealthy planter William Beverly with a land grant from the English crown. The town, founded in 1747, was named for Rebecca Staunton, wife to colonial Lieutenant Governor Sir William Gooch. It served as regional capital for the then-Northwest Territory between 1738 and 1771, and as capital of Virginia for a time in 1781, sheltering state legislators fleeing British troops. Staunton was incorporated in 1871 and became an independent city in 1902.

Located on the Valley Pike, Staunton began developing significantly after the Virginia Central Railroad’s arrival. The commercial district surrounding the railroad depot came to be called the Wharf District because the trains pulled into sidings which loaded their cargo directly into the warehouse there via gangplanks. The warehouse still stands across Middlebrook Avenue. Other warehouses and factories would spring up in the blocks around the depot to take advantage of the transportation connections. To house travelers and businesspersons, the Virginia Central built the Greek Revival influenced American Hotel across from the station. Opened in 1854, the building still stands today.

The city’s commerce truly prospered between 1890 and 1920; it is said that more passengers embarked and disembarked at the Staunton station in 1890 than any other point on the C&O line outside Richmond.

When he moved to Staunton from Washington, D.C., architect Thomas Jasper Collins established a firm that would embrace many Victorian building styles in its works. He designed or renovated more than 200 buildings in Staunton between 1891 and 1911, and many others in the surrounding area. His son and grandson continued the tradition at T.J. Collins and Son until 1997, when the firm closed, and their papers were turned over to the Historic Staunton Foundation. In fact, with five historic districts and strict city codes, the historic nature of the city has been preserved to such an extent that it has been used as a location for several period films, including the Civil War film, Gods and Generals.

A few blocks from the station is the Woodrow Wilson Birthplace Memorial and the Woodrow Wilson Presidential Library, as well as the Woodrow Wilson Museum, with professionally researched and designed interpretive galleries dedicated to the life and times of the 28th U.S. President. The library provides educational programs, research facilities and publications relating to critical topics of the World War I era and early 20th century.

Staunton is also home to Mary Baldwin College, a private, independent four-year liberal arts women’s college, one of the South’s top-tier master’s level educational institutions. In addition to liberal arts and women’s pre-professional military, medical and ministry programs, the college hosts a gifted girls’ program and co-educational graduate and adult studies programs. It also offers a Master of Letters (one of three universities in the United States to do so) in Shakespeare and Renaissance Literature in Performance, in conjunction with the nearby American Shakespeare Center.