The depot, built by the Northern Pacific Railroad in 1909, is constructed of brown pressed brick trimmed with grey granite. 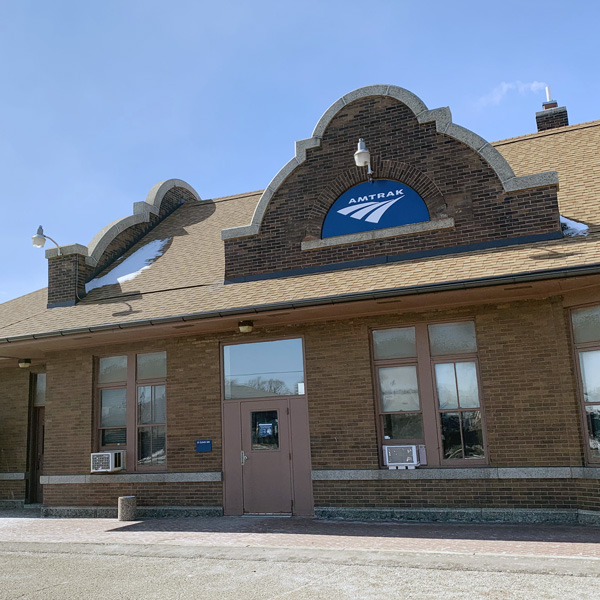 The St. Cloud depot was built by the Northern Pacific Railroad (NP) in 1909 at a cost of about $30,000. It replaced an early 1880s wooden depot that was subsequently moved closer to the new building and converted into a freight house. While constructing the station, the railroad also erected an interlocking tower to oversee the crossing of the NP and Great Northern Railroad tracks.

The depot consists of an one-and-a-half story central block flanked by one-story recessed wings to the north and south. Walls of brown pressed brick are accented with gray granite used for the foundation, water table and coping along the end and cross-gables. The curvilinear gables crowned with demi-lune caps suggest a Flemish or Jacobean Revival aesthetic.Trackside, a projecting three-sided bay with windows allowed the station master to survey traffic up and down the rail line.

Inside, the building originally contained a general waiting area, men’s smoking and women’s waiting rooms, ticket office and baggage room. Red and white terrazzo covered the floors, and the walls had white enameled brick wainscot. These surfaces were not only elegant, but also durable and easy to clean – important factors in the design of a busy public building.

As far back as the 1850s, railroad promoters dreamed of lines crossing Minnesota that would connect it to the coasts. Not much came of these discussions, although numerous lines were chartered and companies attempted to sell stock—the legislature authorized not less than twenty-seven railroad companies between 1853 and 1857.

In 1864, the U.S. Congress chartered the Northern Pacific Railway Company to connect the Great Lakes region with Puget Sound in Washington Territory. It took another six years and the powerful financial backing of Philadelphia financier Jay Cooke before ground was broken west of Duluth at Thompson Junction. Once stoked, momentum pushed the NP track laying teams from east and west until the 2,800 mile main line across the northern United States was finished in 1883. Former President Ulysses S. Grant drove in the final “golden spike.”