Union Depot was constructed in 1924 to serve the Atlantic Coast Line Railroad and Southern Railway. The city saved the historic structure when it was threatened with demolition in 1975. 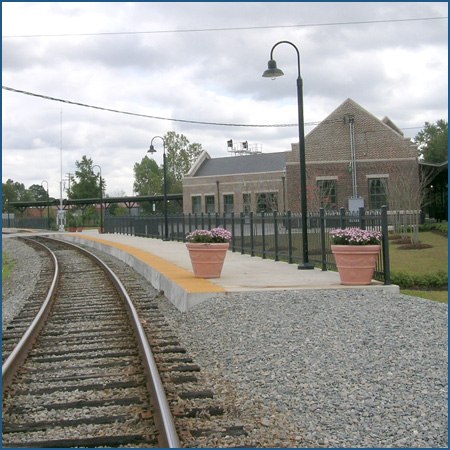 The Selma Union Depot was constructed in 1924 to serve the Atlantic Coast Line (ACL) Railroad and the Southern Railway. It was designed by architect A.M. Griffin as a masonry structure with two waiting rooms and a tower for railroad signal operators.

To the people of Selma, the train depot is more than just a transportation structure. Selma was born as a railroad town and Selma Union Depot is a significant piece of history. The town’s love for its station shined through when the North Carolina Utilities Commission approved the railroad’s petition to tear the station down in 1975 but was saved when the town of Selma objected to its demolition. The city acquired the deed to the property and relieved the railroad of liability concerns. However, the station closed soon after when the railroads’ terminated passenger service to Selma.

The Union Depot opened temporarily in 1976 as a museum and as the center for Selma’s first celebration of “Railroad Days.” Currently, the “Railroad Days” celebration is observed on the first weekend in October, commemorating the town’s railroad heritage. Numerous railroad displays and activities take place at the historic downtown and the station. However, Selma Union Depot is not just a museum anymore. It reopened as a train station in 1982 when Amtrak agreed to begin scheduled stops for the Palmetto. Around this time, ACL built a new curved connection track on the back side of the building to allow the trains to move from north/south to east/west tracks. The station is now surrounded by tracks. More Amtrak service at Selma was established in 1984, when the state-supported Carolinian train was initiated on a Charlotte-Selma-New York City route, before being suspended in 1985 and operating again since 1990.

Further renovations began in 2001. The grounds were landscaped, including new sidewalks and paved parking. Vintage lighting fixtures were added, and the waiting room was renovated, now with exhibits on the town and railroad history. The renovations were completed in 2002 at a cost of $3.4 million. The funds were 80 percent federal, ten percent state and ten percent local.

Those interested in the Civil War might visit Selma to see the Bentonville Battleground, yet Selma is also known for its Tobacco Farm Life museum and it’s American Music Jubilee, a Branson style variety show put on every weekend. VapoRub was developed by a Selma pharmacist, Lunsford Richardson. He later moved to Greensboro and began marketing it as Vicks VapoRub, in honor of his brother-in-law, Dr. Joshua Vick, a Selma physician.

The Carolinian is primarily funded through funds made available by the State of North Carolina. North Carolina station attendants meet all trains at Selma to assist passengers and answer travel questions.