The 1918 Neoclassical station creates a grand entryway to the "Cherry City." Restored in 1999, the building features tall columns, decorative plasterwork and terrazzo and marble floors. 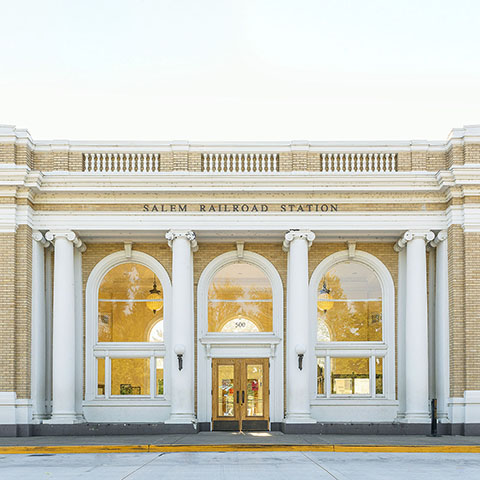 Salem’s station was built for the Southern Pacific Railroad and opened in 1918 as a replacement for a wood frame Queen Anne-style depot built in 1888. Southern Pacific architect J.H. Christie designed the station, and Stebbinger Brothers of Portland built it for $25,000. The Neoclassical masonry structure conveys the idea of a “gateway to the city” with its double-height Ionic columns framing large, arched Roman windows. The central pavilion dominates, with its 1,500 square-foot main waiting room. Originally, smaller wings to both sides housed ticketing, baggage and a women’s waiting room. Decorative plasterwork, coved corner entries and terrazzo marble floor patterns add to the elegance of the structure.

Famous visitors to the station included presidents Woodrow Wilson and Warren G. Harding, future presidents Franklin D. Roosevelt and Dwight D. Eisenhower and former President Herbert Hoover. Many of these presidential visits occurred as part of whistle-stop campaigns during which the candidates traveled the country by train.

The 1999 Salem Depot Project—managed by the Oregon Department of Transportation (ODOT)—fully rehabilitated the 1918 depot. Ceilings and architectural features were restored. A black marble ticket counter was added and two 30-inch globe chandeliers were recreated from drawings of the originals. More modern features were also added, including improvement of parking facilities, and lighting and landscaping for both rail system and park-and-ride operations. The $2.6 million renovation project was paid for by federal and state grants.

In preparation for the building’s centennial in 2018, it received new paint inside and out; through paint analysis, ODOT was able to determine the original color scheme. Historic photos were added to the waiting room, and Wi-Fi was installed for customers waiting for a train or Thruway bus.

Situated along the banks of the Willamette River in the midst of the Willamette Valley, Salem, known as the “Cherry City,” is also the state capital and seat of Marion County. The local Kalapuyan American Indians called the area “Chemeketa,” meaning “meeting or resting place.” When a Methodist mission moved to the plain by the river in 1840, the new establishment was called Chemeketa. There, the Oregon Institute was formed in 1842 and the community was just known as “the Institute.” However, the Institute dissolved within two years, and in 1844 the trustees decided to lay out a town site on Institute lands. It is thought that either trustee David Leslie, from Salem, Mass., or William H. Willson, who filed the plats in 1850-51, suggested that the name be changed to Salem. It derives from a Hebrew word, “shalom,” for peace.

Salem became territorial capital in 1851 after it was moved from Oregon City. Salem incorporated as a city in 1857, and when statehood came in 1859, remained the capital. The Oregon and California Railroad (O&C) reached Salem in 1870, with the first passenger train arriving in town on Sept. 27.  The O&C was envisioned as the first line to connect its namesake states: construction began at Portland in 1868 and proceeded south, but due to a lack of funds, the railroad did not reach the California border until late 1887. The company by then had been taken over by the Southern Pacific Railroad.

In addition to government, agriculture was important to Salem’s growth, and was celebrated yearly in a Cherry Festival from 1903 until World War I – and briefly revived in the 1940s. Today, the state government is the city’s largest employer, but it remains a hub for agricultural food processing.

Image courtesy of the Oregon Department of Transportation.