A popular suburb of Washington, D.C., and one of Maryland's largest cities, Rockville is served by a modern intermodal center offering subway, bus and commuter rail connections. 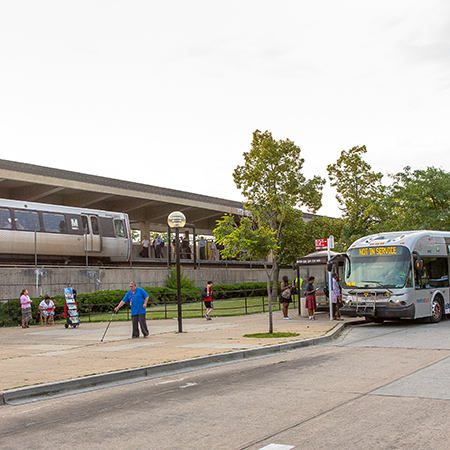 The Amtrak stop in Rockville is a partially sheltered platform on elevated tracks. Amtrak passengers share the eastern side of the modern concrete-and-tile station with Maryland Area Regional Commuter (MARC) trains. The western side serves the Washington Metropolitan Transit Authority (WMATA) Metro subway. The station, which is entered from a pedestrian tunnel under the tracks, is sited directly before a rail overpass carrying two CSXT tracks and two Metro tracks. The concrete wall which separates the Amtrak platform from the Metro side provides some shelter from the elements with wide eaves running its length and enameled metal benches. On the eastern side, the stylized metal roof of the shelter only reaches part-way down the platform, which is one story above the surrounding parking lot and street. Concrete stairs lead up from the pedestrian tunnel, and an elevator also provides access to the platform, Monday through Friday. On weekends, wheelchair access is via a ramp from the eastern parking lot.

Standing beside one of the busiest intersections of the city, only a few blocks from the city center, this intermodal station serves WMATA and Montgomery County buses and provides commuter parking and bicycle storage. A glass-covered overpass from the station crosses the six lanes of Hungerford Drive just south of this intersection and provides a much-used pedestrian thoroughfare that leads to the rebuilt city center and the busy county courthouses. The station was built between 1981 and 1984, and began serving both Metro’s Red Line extension and the newly-restarted Capitol Limited in 1984.

Rockville’s former Baltimore & Ohio (B&O) Railroad station, which is still standing, was placed on the National Register of Historic Places on July 18, 1974. In 1981, the 400-ton depot was moved about 164 feet south of its original location to make way for the current intermodal station. Despite the weight, the station and its attendant baggage annex are relatively small brick structures that would not have been large enough to accommodate today’s rail traffic; nor could they have been integrated into the thoroughly modern, elevated Metro station.

The old B&O station was designed by well-known architect E. Francis Baldwin and built in 1873 from red brick. It features a gabled central bay, board-and-batten dormered longitudinal wings and picturesque Eastlake detailing, particularly in the roofline and gable decoration. The vertical sash pointed windows of the first floor have variegated stone surrounds. A continuous light-colored course runs below the sills of the ground-floor windows, and a brickwork decorative motif runs across the façade in the central gable. The gable ends are clipped, and feature shorter vertical windows. The roof is covered in slate with alternating dark and light bands. Unlike many of the remaining country stations of that day, the exterior character of this one remains unmarred by unsympathetic additions or painting. Today, the building houses law offices and is easily seen from any passing train.

Located in Maryland’s Piedmont region, not far from the Potomac River, Rockville is watered by three creeks (Rock Creek, Cabin John Creek and Watts Branch) that provided refuge for semi-nomadic American Indians in pre-Colonial times. Within the city boundaries, six prehistoric sites have been uncovered and documented as bearing artifacts several thousand years old. By the 1700s, pressure from European settlers had largely driven these original inhabitants away.

The American Indians had established a path on the high ground, known as the Sinequa Trail, through what is now downtown Rockville, which was later made into the Rock Creek Main Road. In the mid-1700s, Lawrence Owen opened a small inn on this prominence, which was comfortably dry year-round, where the road up from colonial Georgetown—now part of Washington, D.C.—met the Rock Creek Road. The tavern and location later came to be known as Hungerford’s Tavern, a convenient stop for tobacco farmers taking their crop to the port of Georgetown.

One of the first calls for freedom from British rule came in 1774 when a group of colonials met at Hungerford’s Tavern to consider the outrage at the closing of the Port of Boston. They issued a series of resolves of boycott of trade with Great Britain until the blockade was lifted, and selected delegates to Maryland’s general committee of correspondence in Annapolis, which was one of the meetings that led to the First Continental Congress.

Montgomery County, honoring one of America’s first heroes, General Richard Montgomery, was formed from Frederick County in 1776, and the small village of Hungerford’s Tavern was chosen as the county seat, as it was a familiar and well-traveled location half-way between Georgetown and Frederick. As an unincorporated village, it was known variously as Hungerford’s Tavern, Williamsburg and Montgomery Courthouse—as the court was held in the tavern at that time. In 1801, the Maryland General Assembly changed the name to Rockville because of its proximity to Rock Creek. Rockville was incorporated as a city in 1860.

Rockville remained a small village until the B&O railroad came through in the 1880s. The construction of the Rockville passenger and freight station was part of the development of the Metropolitan Branch of the B&O and also an important contributor to the city’s growth. Located only 15 miles north of Washington, D.C., Rockville became a popular summer resort from the 1880s through the early 20th century. Many of the visitors built summer homes and soon took up year-round residence. Residential lots in the area known as “West End Park” were vigorously promoted by developers because of convenient railroad access. Both the passenger and freight annex were used until the early 1960s, when passenger services began their hiatus.

Rockville grew tremendously in the 20th century to become the second largest metropolitan area in the state, becoming not only a suburban community for Washington, but a major center of retail as well as research. The city is close to such governmental institutions as the National Institutes of Health and Walter Reed National Military Medical Center in Bethesda and the National Institutes of Science and Technology in Gaithersburg. Since 1990, Rockville has been at the center of the I-270 Technology Corridor, which is home to numerous technology and biotech companies. The city’s upscale shopping centers also have made it a major regional retail powerhouse.

The original town center languished as the rest of the city grew, aside from the very busy governmental buildings, until much of it was torn down in the late 1960s as part of what was hoped would be urban renewal. However, the very large Rockville Mall project, its mainstay, did not address the way in which residents lived and wanted to work on a much more human scale. The failed shopping center and some beloved local stores were torn down in 2004 and the city center rebuilt in a partnership between private and public investors. The city has developed a walkable, pedestrian-friendly, mixed-use environment—one that recognizes the desires of the citizens for human-scaled, transportation-oriented development that mixes business with other needs. The proximity of the intermodal station close to the city center has been critical to this design.

Saint Mary’s Church, close by the B&O station, began as a Roman Catholic chapel built in 1817. Its cemetery is the resting place of the famous American author, F. Scott Fitzgerald, who was buried in Rockville in 1940, followed by his wife, Zelda, in 1948. It is not generally known that Fitzgerald had numerous family members in Rockville, and returned there often throughout his life.