Staples Mill Road Station is a major rail hub with connections south to Charleston, Savannah and Florida vacation spots, or north to our nation’s capital and the greater Northeast. 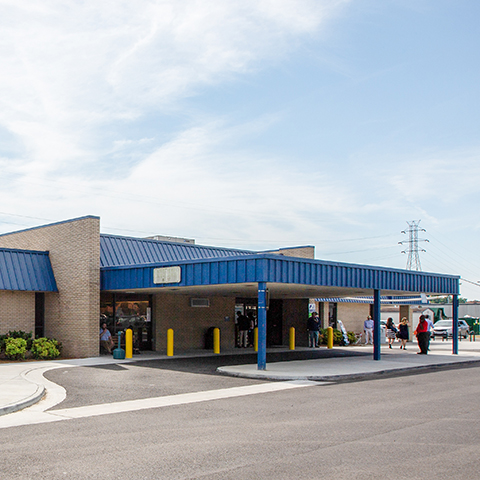 The Staples Mill Road station is located just north of Richmond in the Henrico County suburbs, and is the busiest Amtrak facility in the Southeast. It opened in Nov. 1975, built to replace the historic, neoclassical Broad Street Station sited about three-and-a-half miles south and adjacent to Richmond’s famous Fan District. The new station facilitated train movements, cutting about 10 minutes from the run times of New York-Florida trains. Following a public open house on Nov. 14, the northbound Silver Star (New York – St. Petersburg/Miami) was the first train to stop at the facility the following day.

Designed by David Volkert and Associates, with Roderick Slater as the main architect, the station consists of a one-story building of buff brick and steel construction with two tracks served by one platform. Walls of windows allow natural light to flood the waiting room, which features built-in bench seating. Minor renovations over the years included the expansion of the parking lot and inclusion of employee parking, as well as the addition of a mechanical department.

The city of Richmond is the capital of Virginia. Founded in 1737, it was named after the town of Richmond, England, whose view of the Thames River was remarkably similar to Richmond’s view of the James River. The city is rich with history. Patrick Henry delivered his “Liberty or Death” speech at St. John’s Church in Richmond. In 1780, the state capital was moved from Williamsburg to Richmond to provide a more centralized location and to isolate the capital from British attack. In 1786, the Virginia Statute for Religious Freedom was passed in Richmond, leading to the principle of freedom of religion.

After the Revolutionary War, Richmond emerged as an important transportation crossroads and economic center, much tied to its role in the trade of enslaved people. The James River was used to create the first canal system in the United States, but later gave way to railroads, making the city an important crossroads and the site of the first triple railroad crossing.