Anchoring the southern end of the famous Raton Pass, the historic 1903 depot welcomes thousands of Boy Scouts each summer as they head for the Philmont Ranch. 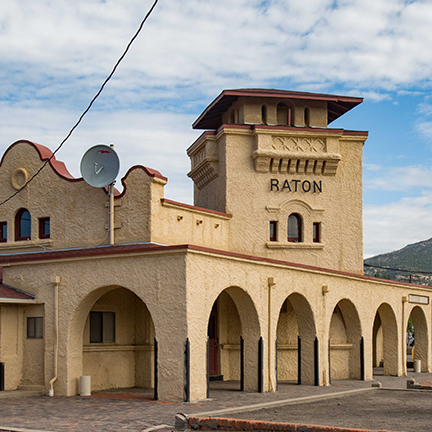 The Amtrak stop in Raton is at the historic Santa Fe Depot. Built in 1903 by the Atchison, Topeka, and Santa Fe Railway, the station stands as a monument to the city’s Spanish beginnings. It is a one-story, stucco and brick structure built in the familiar Spanish Mission Revival style that appears throughout New Mexico. The station also includes a tower bearing the town’s name; it was once surmounted by a red tiled spire, but that element was removed in the 1920s due to maintenance issues.

The station is currently owned by BNSF Railway; however, this has been the subject of talks between BNSF and the city of Raton that began in 1999. The city would like to purchase and transform it into an intermodal transportation hub, gift shops galleries, or restaurants. During the course of the discussions, the city of Raton, with help from a local group, The Community Corporation of Raton, secured approximately $1.2 million in federal grants to go toward the station’s revitalization. Additionally, private grants from the George Macaron Family Foundation and the Whited Foundation provided supplemental funds to be used towards the station’s purchase and revitalization.

There is not yet an agreement, with discussions continuing over the city building a replacement building to house the BNSF operations now in the Raton station. The city is optimistic about the future of the Raton depot, which is on the National Register of Historic Places. One of the station’s original purposes was to service and house crews and locomotives used to move rail cars across the Raton Pass, a 7,834-foot crossing over the Rocky Mountains.

The city is located at the southern terminus of the Raton Pass, the rugged trail through the mountains utilized by American Indians and Spanish explorers heading in the direction of Colorado. The town itself was founded through the purchase of land in 1880 from the Maxwell Land Grant. The city was renamed Raton, replacing the area’s original title, Willow Springs, as it was called on the Santa Fe Trail. The AT&SF Railway had arrived a year earlier and had constructed a rail system through the area that helped the town to prosper as a railroad, mining, trading and ranching center in New Mexico.

Today, Raton is known as the gateway to the Philmont Boy Scout Ranch. Due to the town’s convenient proximity to the nationally renowned park, Boy Scout troops from across the United States frequently pass through the station where they can take a shuttle to the park. Each summer, approximately 5,000 scouts use this station en route to/from the Philmont Ranch.