The tan brick depot was constructed by the Pennsylvania Railroad in 1953 to replace an earlier Victorian structure. Today Paoli is a bustling stop for Amtrak and SEPTA trains, as well as regional bus lines. 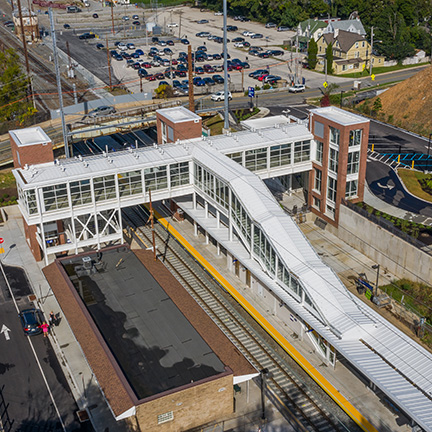 Paoli has long been an important commuter transportation hub for Philadelphia’s western suburbs. In addition to Amtrak, the station is served by SEPTA regional rail and buses. The present one story tan brick building was constructed by the Pennsylvania Railroad (PRR) in 1953 at a cost of $140,000; it replaced an earlier Victorian depot from 1893. During the mid-20th century, many stations along Philadelphia’s Main Line were stripped, torn down or used by municipalities in fire-fighting exercises – symptoms of the decline of private passenger rail service in the United States and the cost-cutting measures adopted by railroads to reduce overhead and raise capital.

The heavy usage of the station led Chester County, Amtrak, the Southeastern Pennsylvania Transportation Authority (SEPTA) and the Pennsylvania Department of Transportation (PennDOT) to come together with Tredyffrin Township, Willistown Township and the Delaware Valley Regional Planning Commission to propose a new intermodal transportation center as well as a commercial and potential residential redevelopment of the adjacent 30-acre Paoli Rail Yard.

The rail yard has a long history: operations began in 1915 with a car shop used to repair steam-powered rail cars. Between 1939 and 1967 it was owned by the PRR, and then by the Penn Central Transportation Co. until 1976. In April of that year, it was conveyed to Conrail, which immediately transferred title to Amtrak. Conrail continued to operate the facility until 1983, when SEPTA took over. As part of the envisioned revitalization of the Paoli station area, the rail yard underwent remediation. SEPTA, Amtrak and the U.S. Environmental Protection Agency worked together to remove toxic chemicals, including PCBs, in preparation for the construction of a new station and other development.

The $48 million Paoli Train Station Accessibility Improvements Project kicked off in summer 2016 to bring the facility into compliance with federal accessibility standards. A joint effort between SEPTA and Amtrak, in coordination with PennDOT, it was completed in fall 2019.  Amtrak worked with project partners to advance a series of station enhancements including a new center high level platform, new elevators, stairs and ramps, a pedestrian overpass, parking lot improvements, accessibility improvements to the existing depot and upgrades in rail infrastructure to support other project components. Vehicular circulation was improved in the south, northeast and northwest parking lots.

With the completion of the new upgrades, customers traveling in and out of the Paoli station board and alight via a new center platform, whose surface is level with the floor of the rail cars. Additionally, the historic outbound wooden canopy that was part of the community’s late 19th century depot was restored and repurposed as a cover for new bike parking facilities.

The project team overcame the challenges of safely constructing between, adjacent to and over active railroad tracks and catenary wires, while maintaining passenger service and minimizing impacts in a highly constrained site. In March 2019, the project received the PA Rail/Transit Transformative Project of the Year Award during the March of Dimes’ annual Transportation, Building + Construction Awards luncheon.

The project is the initial phase of the Paoli Intermodal Transportation Center Project, which will be followed by the Paoli Transportation Center Highway Improvements Project currently in design by PennDOT. These projects set the stage for a future Paoli Intermodal Station and Parking Garage Project, as well as spurring renewed economic growth and development in the Paoli commercial corridor.

Paoli is situated in three townships: Easttown, Tredyffrin, and Willistown. The area is named for the Paoli Inn founded in 1769 by Joshua Evans. The inn, which stood near the current site of the Paoli post office, was built on land bought by Evans’ father from William Penn in 1719. It was named for General Pasquale Paoli, after he had received the 45th and final toast at a St. Patrick’s Day celebration at the inn. Paoli was a Corsican patriot and leader of the first democratic republic in the modern world. The town grew up around the building, eventually co-opting the inn’s name.

During the Revolutionary War, the area became infamous as the location of the Battle of Paoli, also known as the Battle of Paoli Tavern or, perhaps a bit melodramatically, as the Paoli Massacre. Fought on September 21, 1777, the battle saw a decisive British victory by the forces under the command of Major General Charles Grey over those of colonial Brigadier General Anthony Wayne. Left behind by George Washington with 1,500 troops to monitor and harass the British, General Wayne set up his camp near Paoli Tavern. The British, with more than three times as many troops, planned a surprise assault for roughly midnight, and set upon the camp in three waves.

To make sure that the Americans were not alerted to their presence, General Grey ordered his men to remove the flints from their muskets, earning him the nickname “No Flint” Grey. Catching the Americans completely unprepared, the British took the camp without trouble. Though the routed American troops claimed that the British gave no quarter, only 53 Americans were killed during the battle and the vast majority escaped. The disappointed American troops vowed revenge for this supposed massacre, leading the British troops involved to take to wearing red feathers in their hats to let the Americans identify them in future engagements, a sign of their contempt. To this day the Royal Berkshire Regiment wears red-backed badges on their caps to commemorate this disagreement.

This facility has a waiting room and is staffed by Amtrak employees. The Keystone Service and Pennsylvanian are financed primarily through funds made available by the Pennsylvania Department of Transportation.