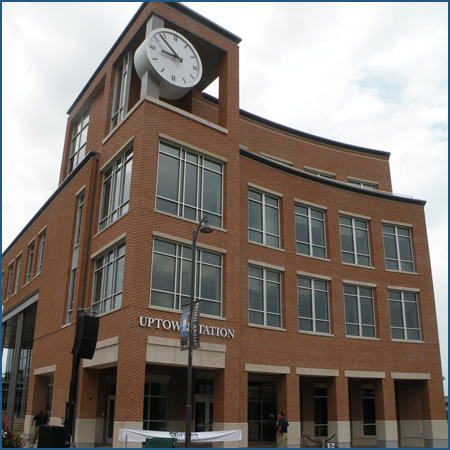 On June 14, 2012, Uptown Station was dedicated during a ribbon-cutting ceremony that included remarks from U.S. Transportation Secretary Ray LaHood, U.S. Senator Dick Durbin, Normal Mayor Chris Koos, Amtrak Board Chairman Thomas Carper, and other officials. The day kicked-off with live music and Uptown Station was open for tours. Many visitors admired the paintings, sculpture, and other works of art commissioned for the public areas of the building. The Amtrak Exhibit Train, which charts the history of the passenger railroad through displays of memorabilia, was also open to the public.

Eleven years in the making from initial concept to completion, the new 68,000 square foot transportation center was designed by Ratio Architects of Champaign and brings together the services of Amtrak trains, intercity and Bloomington-Normal Public Transit system buses, airport shuttles, taxis, and bicycles. Constructed of classic red brick, the four-story structure includes limestone trim for the lintels and doorways. Wide windows allow ample sunlight to flood the interior while a prominent corner tower with a large clock face has become a landmark for the neighborhood. The complex features retail and municipal office space, including Council Chambers, a community room for use by local organizations, and a 380-car parking garage.

Through the selection and use of environmentally friendly materials and design solutions, the town believes that the building will achieve a Leadership in Energy and Environmental Design (LEED) Silver certification. A green roof is partially planted in vegetation that will absorb rainwater and cool the building, while the rest of the roof is covered in reflective materials to deflect sunlight. City officials plan to provide free Wi-Fi to passengers and others visiting Uptown Station. Also of note is that the Passenger Information Display System (PIDS) in the station is the first fully ADA compliant installation outside of the Northeast Corridor.

In August 2010, federal and state officials—including U.S. Senator Dick Durbin, U.S. Representative Debbie Halvorson, and Peter Rogoff, Administrator of the Federal Transit Administration (FTA)—joined representatives from the town of Normal and Amtrak to break ground for this multimodal transportation center. In February of that year, the town received a $22 million Transportation Investments Generating Economic Recovery (TIGER) grant made available under the American Recovery and Reinvestment Act of 2009 (ARRA). With this grant in place, the estimated $45.6 million multimodal center project was completely funded. Normal had previously won approximately $10.5 million in grants through the FTA’s Bus and Bus Facilities program. Additional monies totaling $13.2 million were obtained from the Illinois Department of Commerce and Economic Opportunity and through bonds issued by the town.

Uptown Station is one component of a redevelopment plan meant to revitalize Normal’s Uptown district. The plan includes the rehabilitation of existing structures and the erection of new buildings to create a mixed-use neighborhood that fosters activity throughout the day and evening. Adjacent to the multimodal transportation center, the town and the Illinois Department of Transportation (IDOT) cooperated in the design and construction of a large tree-lined traffic roundabout that won the U.S. Environmental Protection Agency’s 2011 National Award for Smart Growth Achievement in the category of Civic Places. Rather than simply manage traffic, the circle is intended to be an attractive public space. Grassy plots and ample seating encourage people to talk, play, and hang-out in the middle of this revitalizing neighborhood. The circle includes a water feature that employs native plants to cleanse and filter polluted stormwater run-off which is then deposited in an underground cistern. The stored water is later used to irrigate the streetscaping.

Normal is one of the busiest Amtrak stations in Illinois and the greater Midwest. The previous depot was built in 1990 on the Town Hall parking lot, replacing a station in Bloomington that was in disrepair and thought to be in an out-of-the-way location. By the mid-2000s, increasing ridership on the Lincoln Service and the Texas Eagle had caused overcrowding at the old depot, and thus city, IDOT and Amtrak officials began to consider alternatives that finally resulted in the construction of Uptown Station.

Under the Federal Railroad Administration’s High-Speed Intercity Passenger Rail (HSIPR) program, the state of Illinois received $1.2 billion to improve the Chicago-St. Louis rail corridor so passenger trains will be able to attain regular speeds of 110 mph. When completed in 2017, the upgraded line is expected to present a strong transportation alternative for drivers along the congested Interstate 55 corridor, and therefore produce increased ridership.

The town of Normal is the smaller of two adjacent municipalities—Bloomington and Normal—that are known as the “Twin Cities.” Normal was originally laid out in North Bloomington in an area known as “the Junction,” located at the intersection of the Illinois Central and the Chicago & Alton Railroads. Both Uptown Station and the former Amtrak depot occupy corners of the intersection where these railroads met.

The Illinois Central built the line to fulfill a charter issued by the Illinois Legislature, aided by Abraham Lincoln during his career as a surveyor and a lawyer. Since its abandonment in 1985, the former Illinois Central right-of-way in Bloomington-Normal has become a walking and biking path called Constitution Trail. The Chicago and Alton route has changed hands several times, including a period when the State of Illinois intervened when an owner was in bankruptcy. The route is now owned by Union Pacific.

George M. Pullman’s Pioneer, one of the first railroad sleeping cars, was constructed in Bloomington at the Chicago and Alton Railroad Shops. The Pioneer was so wide that it could not fit under some bridges or on certain tracks. When President Lincoln was assassinated, the car was added to “The Lincoln Special” (President Lincoln’s funeral train) on its trip from Chicago to Springfield.

Abraham Lincoln’s “Lost Speech” was delivered in Bloomington on May 29, 1856. It is unknown why there are no transcripts or written accounts of the speech. The traditional reason given is that Lincoln’s discourse was so powerful, reporters forgot to take notes. Others suggest that the speech was destroyed because of his vehement condemnation of slavery. The state Republican Party was founded in Bloomington after the speech was delivered.

Normal was officially incorporated in 1867, 24 years after Bloomington, and was named after Illinois State Normal School, a teacher-training institution. The school has since become Illinois State University and is a fully accredited, four-year institution that employs many Normal residents. Founded in 1850, Illinois Wesleyan University in Bloomington is a liberal arts university with an enrollment of 2,100. Wesleyan has long been known for its faculty, distinctive liberal arts curriculum and its beautiful and welcoming campus.

Bloomington-Normal boasts a wide variety of other cultural attractions. Constitution Trail is one of Illinois’ most noteworthy parks and follows routes lined with historic buildings. The three-story Children’s Discovery Museum is directly across the tracks from the Uptown Station and offers programs, classes, and hands-on exhibits for children. The historic, avant-garde Normal Theater—the first theater in Bloomington-Normal built for sound films—has been restored to its original condition. Other attractions include the Illinois State University Planetarium, Redbird Arena, and the Sugar Creek Arts Festival held in July.

In 2008, Forbes named Bloomington-Normal No. 20 on its list of the 25 smartest communities in the United States.

Mitsubishi’s only passenger car assembly plant in the United States is located in Normal. The popular snack food, “Beer Nuts,” was invented by the Shirk family of Bloomington in 1937, and the company’s manufacturing facility is still located in the town. The area’s largest employer is State Farm Insurance, which was also founded by a local family.

The Lincoln Service is supported through funds made available by the Illinois Department of Transportation.