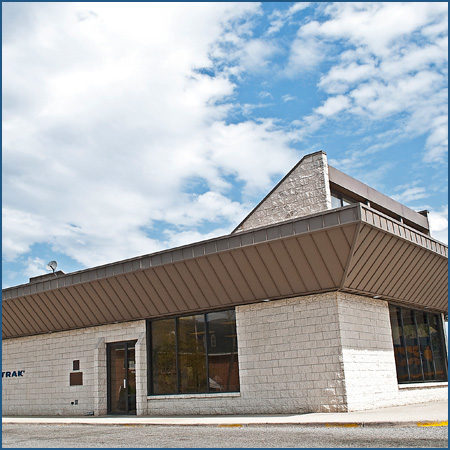 The Northeast Regional serves the Newport News station, which is also a transfer point for Thruway buses extending the route to Norfolk and Virginia Beach. This station, at the Hampton Roads Transfer point at milepost 14.5, is also considered the west end of the Newport News rail yard belonging to CSX. Prior to the construction of the current facility, this location served as the Hampton Roads suburban stop for Chesapeake & Ohio Railway (C&O) passenger trains. There was not a station but only a short canopy-covered platform, which still exists today. Until this location was re-opened in October 1981, passenger service went to the former C&O station at the ferry pier on 23rd Street in Newport News. That station building is still standing and in use as a restaurant.

Constructed by the Oyster Point Development Corporation, the white rusticated brick Newport News depot of today consists of a modern rectangular building with large single windows on each side, sitting adjacent to the platforms and canopy. A decorative wedge, fitted with clerestory windows, angles up from the otherwise flat roof line. The soffit on the projecting roof angles down to the brick walls, giving the impression of an inverted hipped roof. The waiting room inside provides modern row seating and a bright red ticket counter, but is modest in size.

According to a city news release, the Commonwealth of Virginia is funding 44 percent of the project through dedicated passenger rail funding which will cover an Amtrak service facility, while the remaining 56 percent, made available through local and regional resources, will pay for the station building, parking and utility work.

Even though Newport News was only incorporated as an independent city in 1958, the region has a long history of European settlement, stretching back to the original colonies on the Virginia Peninsula. In 1634 it was organized as Warwick River Shire, as one of the original Virginia shires formed by the House of Burgesses of the Virginia Colony, by order of King Charles I of England. This county, on the peninsula on the north side of the James River where it meets Hampton Roads, remained largely composed of farms and wilderness until almost 250 years later.

Although rail had been in Virginia since 1836, after the American Civil War, officials of the Virginia Central Railroad—devastated by the conflict—realized they needed outside capital to rebuild: Enter Collis P. Huntington, one of the Big Four railroad magnates who built the Central Pacific portion of the transcontinental railroad, just being completed.

Land agents began buying up land in the county for Mr. Huntington in 1865, and these land purchases formed the bases of the original city of Newport News. By 1880, Huntington chartered the Old Dominion Land Company and transferred his holding to it; and in 1881, with the completion of the Peninsula Subdivision, Newport News became the Atlantic deepwater terminus of Huntington’s C&O Railway. The purpose of this construction lay in creating a direct line from Chicago and the Midwest, by way of the rich coalfields of West Virginia, through to the Atlantic, allowing Huntington to bring West Virginia bituminous coal to port for coastal shipping and worldwide export.

The new railroad brought terminals and coal yards and piers to Hampton Roads, the East’s largest year-round ice-free port. Within a few years, Huntington developed the Newport News Shipbuilding and Drydock Company, which became the world’s largest shipyard of that day. After the Spanish-American War, when President Theodore Roosevelt declared his intention to create the Great White Fleet in the first decade of the 20th century, the Newport News shipyard entered the warship business by constructing seven of the first 16 ships that circumnavigated the globe. Today the shipyard holds a dominant position in American warship construction business.

In the heyday of the C&O, the railroad built the original 23rd Street station in 1892 directly on the waterfront: a large multi-story gabled red-brick Victorian station with a tall rectangular clock tower typical of that day. Its large train shed ran right out on a pier into the James River to meet the steamers. Steamer passengers could transfer to the train to head toward points west and vice versa. The clock tower was taken down sometime during World War I, and the entire station torn down in the 1940s, to be replaced with the building that still occupies that space. Service was moved to Hampton Roads Transfer in 1981.

In 1932, the C&O inaugurated the George Washington, a deluxe train with separate sections originating in Newport News and Washington, D.C., that operated to Louisville and Cincinnati. To promote the train, the C&O used the now-iconic Chessie the Kitten (credited to Lionel Probert, who was an assistant to the C&O president). In 1962, after the C&O merged with the venerable Baltimore & Ohio (B&O) Railroad, the George Washington was combined with the National Limited and extended to St. Louis.

But service to Newport News did not end in 1976. The historic Colonial name, used for a train which ran from January 18, 1892, to April 28, 1973, between Boston and Washington, D.C., was revived on June 15, 1976 and applied to a new Amtrak service between New York (later extended to Boston) and Richmond/Newport News, that replaced the James Whitcomb Riley. On October 28, 1995, the Boston-Newport News train received the Northeast Direct name that Amtrak applied to all of its Northeast Corridor conventional trains. In October 1996, Amtrak service to the Peninsula doubled when the Twilight Shoreliner, an overnight train between Boston and Newport News, was inaugurated. All Amtrak trains serving the Peninsula were rebranded as part of Amtrak’s Northeast Regional service in 2008.

Newport News is still a shipbuilding and railroad city, with Newport News Shipbuilding a major employer; the CSX Newport News Marine Terminal, covering 140 acres; and two industrial parks. Large coal piers are still operated by CSX Transportation, the C&O’s successor. Other water- and harbor-related vocations are also pursued because of the superior harborage at Hampton Roads.

Many defense suppliers are located nearby as well. Established during Word War I at Mulberry Island, the large base at Fort Eustis (10,000 employees) houses the U.S. Army’s Transportation Corps. Nearby military facilities include Fort Monroe, Langley Air Force Base, Naval Weapons Station Yorktown, and Camp Peary. Across the harbor in South Hampton Roads stands the world’s largest naval base, the Naval Station Norfolk, along with other military installations.

Research and education also play a role in the regional economy. The Thomas Jefferson National Accelerator Facility is located in Newport News, where over 2000 scientists from around the world use the facility for fundamental research in nuclear and high-energy physics. It also partners with industry in providing advanced technology and applications, and the community through educational outreach.