Located a couple of blocks east of the New Haven Green and the Yale University campus, the New Haven – State Street station is served by Amtrak, commuter rail and local buses. 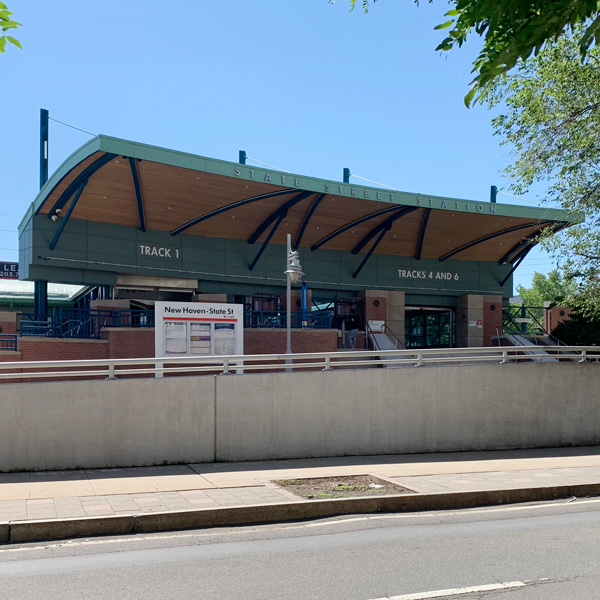 Amtrak trains began stopping at the New Haven – State Street station in June 2018 with the launch of the new CTrail Hartford Line service between New Haven and Springfield, Mass. Amtrak customers wishing to board the Acela, most Northeast Regional trains or the Vermonter must use New Haven Union Station, located about one mile to the southwest.

State Street station, which is a couple of blocks east of the New Haven Green and the Yale University campus, opened in June 2002 as a stop for Shore Line East commuter trains; it also became the eastern terminus for select Metro-North commuter trains. The station consists of two platforms with canopies that are connected to the main entrance on State Street by an enclosed pedestrian walkway over the tracks. In addition to commuter rail, the station is served by CTtransit New Haven buses; other bus connections are available at the New Haven Green.

The CTrail Hartford Line was made possible through the New Haven-Hartford-Springfield (NHHS) Rail Project, a partnership between the state of Connecticut, Amtrak and the Federal Railroad Administration, as well as the states of Massachusetts and Vermont. This multi-year effort has aimed to create new commuter and enhanced intercity passenger rail services benefiting the cities along the New Haven-Springfield rail line. CTrail Hartford Line trains complement Amtrak service to offer travelers greater flexibility and choice.

In preparation for the launch of CTrail Harford Line service, a second platform was added to the State Street station between 2016 and 2018. This meant that trains would not have to cross over multiple tracks to reach the existing platform, thereby minimizing potential delays and congestion for all rail customers. In addition to the accessible, high-level platform, a new entrance canopy and bicycle racks were installed. This approximately $17 million improvement program was in part funded through a $10 million federal Transportation Investment Generating Economic Recovery (TIGER) grant won by the Connecticut Department of Transportation.

When European explorers first investigated the southern coast of New England, it was inhabited by the Quinnipiack American Indians who belonged to the Algonquian language family. They took advantage of the natural riches of the area, which included three rivers that converged to enter Long Island Sound, creating an estuary capable of supporting various seasonal birds, fish and shellfish, and other animals. Dutch navigator Adriaen Block passed by what later became New Haven in 1614, calling it Rodeberg, or “Red Mount Place” in reference to the two prominent, rocky outcroppings of reddish stone that are presently known as East and West Rocks.

The present site of New Haven, with its small natural harbor, was settled by 500 English colonists in April 1638. Led by the Reverend John Davenport and his prominent backer, London merchant Theophilus Eaton, the small band of Puritans had arrived in Boston in 1636, but soon set out to find a place where they could establish their own community. Having heard about the coast of Connecticut, Davenport, Eaton, and a small party made an excursion the next year to explore the area.

The harbor offered possibilities for trade, important to Eaton and his associates, and the Quinnipiack were generally welcoming, viewing the English as a bulwark against hostile tribes such as the neighboring Mohawk and Pequot. The colonists quickly traded a collection of coats, utensils and other goods with the Quinnipiack in exchange for the land around the harbor.

By 1640, the settlement was known as Newhaven after a port in Sussex, England. The settlers committed themselves to creating a community of God untainted by non-believers. Rather than follow the statutes of English common law, Davenport and his associates declared that the “Word of God” would govern daily life. Only members of the church were allowed to vote or hold office, and non-Puritans were not welcome to settle in town.

To maintain their vision and keep others out, New Haven soon became the head of its own eponymous colony. This independence lasted only a generation, as power struggles in England placed pressure on New Haven to join the seemingly liberal Connecticut Colony in 1664. As a result of the merger, a system of dual capitals—New Haven and Hartford—was born that lasted well into the 19th century.

Education became vital to New Haven’s identity when the Collegiate School, formed in 1701 to train ministers and laymen, relocated to the town in 1716. In response to a generous donation by Welsh merchant Elihu Yale of 417 books, a portrait of King George I and the proceeds of the sale of nine bales of merchandise, the school was renamed in his honor. The college established its campus to the west and north of the Green, and the oldest building to survive to the present day is Connecticut Hall, erected in 1752.

Luckily, New Haven escaped the physical destruction of the Revolutionary War; invaded by British forces in 1779, it was left intact whereas its neighbors went up in flames. Post-war, New Haven blossomed as a mid-sized industrial city with an emphasis on fine technical goods such as clocks and hardware. The town also supported a healthy carriage industry.

Yale graduate Eli Whitney developed the cotton gin, essential to the profitability of southern cotton farmers, but later turned to the manufacture of firearms. About two miles north of downtown, in what is now East Rock Park, the inventor constructed a factory in 1798 to produce guns. Whitney helped revolutionize manufacturing by implementing standardization, including power machines, to create mass-produced goods that were of fairly equal quality. Toward the end of the 19th century, the Whitney property was purchased by the Winchester Repeating Arms Company, manufacturer of the gun that “won the West.”

Although raw materials and finished goods moved into and out of the city by ship and wagon, neither mode could live up to the speed promised by the new railroads that were just coming onto the nation scene in the 1830s. As one of the most industrialized and wealthy regions of the nation, New England early participated in railroad building, and by 1871, New Haven could boast of six rail lines. The first railroad to break ground in the city was the Hartford and New Haven (H&NH), chartered in 1833 to link the two capitals, and in full operation six years later. The line extended to the shores of the Quinnipiac River and the Belle Dock where passengers and freight could be loaded onto steamships to New York City.

A rail route to New York City, which was quickly growing into the East Coast’s dominant commercial center and international port, was initially stymied by geography. The Connecticut coast, which contained many of the state’s oldest cities, was a trial for railroad builders as it was marked by numerous streams and rivers that would have to be bridged. The challenge was not undertaken until the New York and New Haven Railroad (NY&NH) was chartered in 1844; by 1849, the line had opened between the two named endpoints, with access over the New York and Harlem Railroad into eastern Manhattan. In 1848, the NY&NH leased the New Haven and Northampton Company (NH&N), whose line, constructed in a former canal bed, linked New Haven and Plainville, Conn. The NY&NH gained access into the state’s interior and thereby threatened the dominance of the H&NH.

In 1848, the NY&NH opened a Union Station on Chapel Street east of downtown that was also later serviced by the NH&H. Designed by local architect Henry Austin, the $40,000 depot was considered quite innovative and introduced elements—such as a clock tower—that were soon found in stations constructed by other railroads.

Realizing the value in helping one another and shutting out rivals, the H&NH and the NY&NH agreed to merge in 1872, resulting in the New York, New Haven and Hartford Railroad, or the “New Haven.” The recently consolidated railroad chose to construct a new Union Station in 1874 near the NY&NH rail yard a few blocks south of the old Chapel Street facility.

The New Haven quickly became the dominant freight and passenger line in southern New England, absorbing smaller lines in order to control the route linking Boston and New York City. In the first decade of the 20th century, a group of investors headed by J.P. Morgan gained control of the New Haven and went on a buying spree to acquire steamship lines and trolley companies in an effort to completely monopolize regional transportation. Electrification of the main line between New York and New Haven also took place since it was busy with both through and commuter trains. By the 1920s, the New Haven had more than 2,000 miles in its portfolio, and it was estimated that it carried 10 percent of American passenger rail traffic.

An influx of immigrants in the late 19th century brought sizable Irish and Italian populations to the city, so that by 1900 almost one-third of New Haven residents were foreign born. One of the lasting contributions of the Italian immigrants was the introduction of diverse cuisines from various parts of the peninsula. In New Haven’s Little Italy, a handful of pizza shops date back to the 1920s and 1930s. From their coal or wood burning ovens, they produce a local favorite that continues to draw crowds: white pizza topped with clams. Interestingly, another culinary claim to fame is made by Louis’ Lunch, a small café opened in 1895 that is credited with inventing the hamburger.

The “Elm City” is known for lush tree canopies that shade downtown streets and beautify numerous National Register Historic Districts. Many of those sun-dappled roadways lead to the central campus of Yale, considered one of the most beautiful in the country. Numerous buildings from the late 19th and early 20th centuries, particularly the residential colleges, were designed in a romantic Collegiate Gothic style, but Yale also holds a few modern masterpieces designed by architects such as Louis Kahn. Residents, students and visitors often take advantage of the university’s numerous museums, such as the Yale Center for British Art and the Peabody Museum of Natural History, as well as its year round roster of musical, theatrical and art shows.

Image courtesy of the Connecticut Department of Transportation.