Although the Montpelier station serves the state capital, the stop is located in the adjacent town of Berlin; a branch line originally allowed direct access to downtown opposite the capitol. 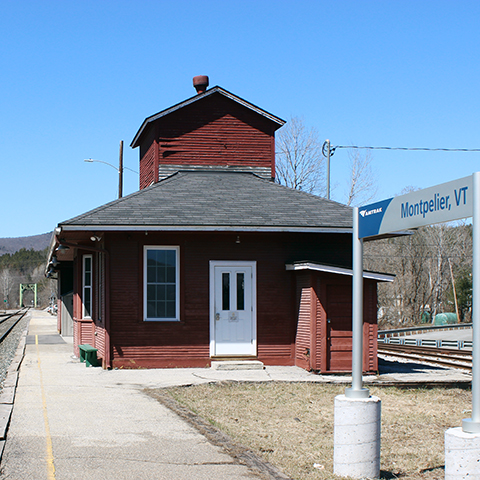 Although the Montpelier station serves the state capital located approximately two miles to the east, the depot is located west of the Dog River in the town of Berlin. A caretaker opens and closes the station at train times, and a taxicab service provides transportation between the station and downtown Montpelier.

There has been a passenger rail station at this location—known to locals as Montpelier Junction—since the mid-19th century. The junction takes its name from the joining of the old Vermont Central Railroad mainline and a branch line that allowed direct service to the capital. Opened in July 1849, the branch line carried passenger trains to Montpelier until regular service was discontinued in 1938 and replaced by a bus between downtown and Montpelier Junction. Passenger rail service along the railroad mainline ended at the junction in September 1966 and did not resume until the introduction of the Montrealer(Washington-New York-Montreal) in 1972.

Documentation shows that the current depot, a red-painted wood-frame building with a gabled roof, is likely the third to occupy the site. It was constructed for the successor Central Vermont Railway and opened in 1934. Passengers use a small waiting room with wooden benches and large windows that allow in ample natural light. The rest of the depot, which is divided from a freight room by a covered passageway, is used by the New England Central Railroad.

Along the platform is a projecting three-sided bay lined with windows; from this spot, the station master could monitor traffic up and down the rail line. The station also features a central tower with a gabled roof. A 1934 photograph shows that a canopy once ran along the platform to protect passengers from inclement weather, but it was removed many years ago.

Montpelier Junction originally served as a wood stop for the Vermont Central Railroad (VCR), which built through the area in 1848-49. The trains stopped at the junction and other designated communities to load up on wood to power the steam locomotives. The VCR and its successor eventually completed a rail network that linked the state with the important international ports of Boston and New York City, as well as Montreal in Quebec.

In 1872 the VCR was reorganized as the Central Vermont Railroad (CVR). In the early 20th century, the CVR undertook a number of infrastructure improvements along its network. Between 1906 and 1910, Montpelier Junction gained a new engine house, a 50,000 gallon water tank and a new coaling facility. None of these structures remain.

When European explorers first visited what is now central Vermont, it was primarily inhabited by the Abenaki American Indians who belonged to the Algonquian language family. Unlike portions of the New England coast, Vermont was difficult to access due to mountain ranges and thick forests. Many scholars believe that it was not densely settled and was instead used as a seasonal hunting ground by various tribes. Vermont remained beyond the sphere of European colonists well into the mid-18th century and acted as a buffer zone between the French towns of southern Canada and the English settlements of coastal New England. The region only became attractive to a greater number of English colonists after the British defeated the French in 1760 and gained permanent control of Canada.

Vermont did not come into existence as a separate entity—an independent republic—until 1777, and until then the land was heavily disputed by New York, New Hampshire and Massachusetts. As early as the 1730s, hunters and traders explored the area, but settlement was not forthcoming. By the 1760s, Governor Benning Wentworth of New Hampshire began chartering numerous towns throughout Vermont, leading to complaints from the government of the New York colony. Wentworth was especially interested in the region due to its stands of timber which could be used in boat building, a lucrative industry centered on the New Hampshire coast. Trees like white pines were highly valued for ship components such as masts.

Berlin was chartered in June 1763, but the first permanent European-American settlers did not arrive for two more decades. As families came to farm the land and make use of its wooded hillsides, the first saw and grist mills were built in the early 1790s. They were located north of Berlin Pond where a series of falls provided ample water power. A village center subsequently developed in this busy area. While Berlin experienced its first growth spurt, Vermont achieved statehood in 1791.

To the east of Berlin, in the steep valley where the Winooski River and its North Branch meet, sits Montpelier. One of its first European-American settlers was Colonel Davis, who built a log cabin along the North Branch in about 1787. A grant to settlers from Massachusetts brought more people to the area along the North Branch. Due to the community’s proximity to the Winooski, as well as its residents’ willingness to donate land, Montpelier was chosen to be the state capital in 1805. Its central location also meant that it was equally accessible from the farthest reaches of the state.

Aside from government functions and the milling of grist and wood, the financial and insurance sectors were prominent in early Montpelier. The Vermont Mutual Fire Insurance Company organized in 1828, and the National Life Insurance Company was established in 1848. The latter eventually became the third largest in the nation. Among the founders of the National Life Insurance Company was local physician Julius Dewey. His son, George, was born in Montpelier in 1837. He is probably best known for his 1898 victory at the Battle of Manila Bay during the Spanish-American War. He is the only person in the history of the country to attain the rank of Admiral of the Navy, the most senior position in the United States Navy.

The railroad bolstered growth in the mid-19th century by connecting the region to distant markets and ports while cutting down transport times. On July 4, 1849, the first train, hauling flour, stopped in Montpelier. The president and general manager of the VCR served as conductor. There was initially no depot in town, but this situation was quickly remedied with the opening of a two story brick Greek Revival structure the next year. It was located south of the capitol complex between the buildings fronting State Street and the Winooski River.

Thirty years later, the CVR replaced the first depot with a larger, more modern structure befitting the town’s position as the state capital. Featuring a soaring clock tower with elaborate corbelling, it had a central hall flanked by gentlemen and ladies’ waiting rooms, ticket office, baggage room, telegraph and express offices. The building’s end gables were embellished with elaborate stickwork and cutout designs that delighted the eye.

Passenger rail service over the branch line to the downtown depot ceased in 1938 as Americans embraced new travel options such as the automobile. The Vermont Transit Company subsequently converted the building into a bus depot, and there were connecting shuttles out to the Montpelier Junction depot. In 1963, onlookers watched as the 1880 depot was dynamited, its grand tower falling to the ground in a pile of rubble and dust. Today the site is a parking lot.

In 1895, Montpelier reorganized as a city, and within three years annexed the northern part of Berlin across the Winooski. Another addition came in the form of a 185-acre park donated by John E. Hubbard in 1899 as well as a further land grant in 1911. Hubbard, the beneficiary of a large inheritance, also built the city’s Kellogg-Hubbard Library.

Montpelier is often paired in descriptions with its neighboring city, Barre, which lies six miles to the southeast. Barre was chartered in 1780 and settled about the same time as Montpelier and Berlin. Granite quarrying and refining became its primary industries after the War of 1812. The extensive granite deposit in the area is estimated at four miles long, two miles wide and ten miles deep. Processing the stone quarried in Barre became one of Montpelier’s main industries. Forty-one granite-related businesses were recorded in 1914.

Skilled laborers came from all over Europe to work the stone deposits. Barre Gray granite, which is known for its superior weather resistance due to its low iron content, as well as its fine grain and even texture, is still much preferred by artists.

The CVR extended a branch known as the Montpelier and Wells Railroad (M&W) to Barre in 1873. About 1880, at the time the CVR opened the new State Street station, the M&W constructed its own red brick depot a few blocks to the southeast at the crossing of Main and Barre Streets. The Main Street façade featured five bays defined by pilasters, as well as an elaborate cornice. At street level, full-height, round-arched doorways and windows allowed ample natural light to flood the interior. A canopy supported by brackets protected passengers from inclement weather as they awaited the arrival of the train. Having long since ceased operation as a passenger rail station, the building was rehabilitated in 1977 and today serves as a commercial space.

The Montpelier and White River Railroad began running between Barre and the capital in 1875; it soon became part of the CVR network. Rail connections allowed the sought-after granite to be shipped to growing cities across the United States where it was used in many grand edifices.

Although called the “smallest state capital,” Montpelier nonetheless enjoys substantial cultural activity due to its governmental, educational and business institutions. The city is home to Vermont College, the New England Culinary Institute, the Vermont Historical Society Museum and the T.W. Wood Gallery and Arts Center. The town of Berlin is home to the Edward F. Knapp Airport, Central Vermont Medical Center and a variety of shopping options along the Barre-Montpelier Road (U.S. Route 302).