Located on the Ohio River, Maysville sits at the mouth of Limestone Creek. The colonial revival style C&O Railway depot, built about 1918, includes details such as quoins and a portico. 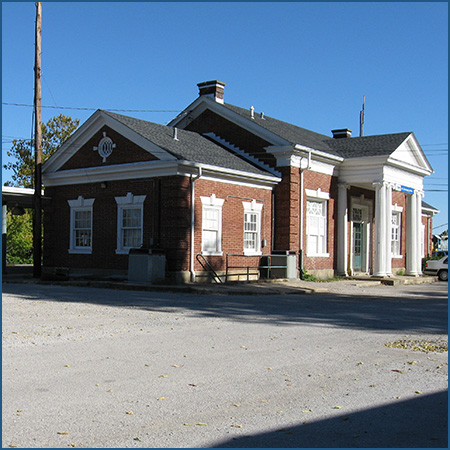 Amtrak began serving Maysville on June 12, 1977 via the James Whitcomb Riley (Washington-Cincinnati-Chicago) — which was soon renamed the Cardinal after the state bird of each state on the train’s route from Virginia to Illinois. A short article in Amtrak News, the company’s employee magazine, noted: “The new stop was added because of the population of the city and its surrounding area.”

The city’s passenger depot was built by the Chesapeake & Ohio Railway (C&O) around 1918 and has a waiting room with traditional wooden benches. The single-story red brick colonial-style building, trimmed in white, has a central entrance under a small classical portico and two small offset wings to either side of the entrance, with star-patterned panes above each front window and similarly-patterned clerestory windows at either end of the building’s wings. Another small rectangular brick building in the same style, the former freight depot, sits nearby. The former Maysville station for the Louisville & Nashville Railroad is also still standing in town, and has been restored for other uses. As part of Amtrak’s Mobility First Initiative, the Maysville station received a new wheelchair lift and enclosure in May, 2011.

In its wooded setting on the Ohio River, Maysville sits at the mouth of Limestone Creek, from which it first took its name. At Limestone, pioneers came ashore from the river and trekked south to the central bluegrass region of Kentucky. In 1775, Simon Kenton of Virginia settled in the area; he would meet travelers at Limestone and escort them south to his station, which eventually became the town of Washington. John May acquired land at Limestone, and Daniel Boone’s brother established a trading post and tavern there. Washington was named the county seat when Mason County (named for George Mason of Virginia) was established in 1788. Maysville, incorporated in 1787, grew as a steamboat port on the Ohio after the Northwest Indian War ended and the threat of attack was over. By the 1830s, Maysville’s population outstripped that of Washington, and in 1848 it absorbed Washington and became the county seat. Today, the former town of Washington is designated as a historical district.

Harriet Beecher Stowe visited local friends in Washington in 1833, and witnessed a slave auction on the front steps of the county courthouse—an event that local historians feel was inspiration for her renowned book, Uncle Tom’s Cabin.

The C&O built along the edge of the Ohio River in the early years of the 20th century to open up access from the prolific coal fields of Ohio and West Virginia through to Chicago and the ports on the Great Lakes. Maysville remained an important river port for the shipment of locally-manufactured fancy wrought-ironwork as well as regionally-produced hemp and tobacco, but coal transport was an important focus at the time.

In the early 1950s, Maysville native Rosemary Clooney, a talented singer and entertainer, came to prominence in Hollywood. Always close to her Kentucky roots, Ms. Clooney insisted that her first film, The Stars Are Singing, premiere at the Russell Theater in her hometown. Ms. Clooney and her brother Nick and his family (including his son George), remained close to Maysville and retained a home in nearby Augusta. In 1999, she helped Maysville launch the Rosemary Clooney Music Festival and she performed in it each year until her death in 2002.

While the station still has a river view, much of the city riverfront is protected by floodwalls. The city has made a virtue of a necessity with a public art project, and commissioned Louisiana artist Robert Dafford to commemorate the history of Maysville in a series of ten murals beginning at Limestone Landing.