The station, completed in 1997, adjoins an historic antebellum station/hotel that was once served by the Baltimore and Ohio Railroad. A scenic byway welcome center and a children's museum also occupy the complex. 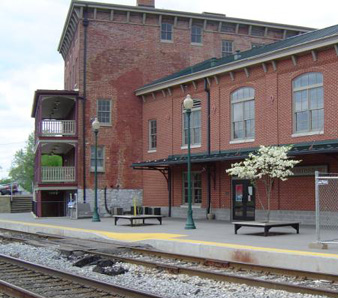 Amtrak and MARC passengers share the Martinsburg station, a brick structure completed in 1997, which adjoins an historic station/hotel that was once served by the Baltimore and Ohio (B&O) Railroad. Designed by the local architectural firm of Grove & Dall’Olio, the newer 6,000 square-foot transportation center mirrors the Italianate Victorian style of the existing pre-Civil War hotel building. The station project, funded at about $1 million by state and federal transportation grants, included site landscaping, parking lot and storm water design.

The B&O did not build the combination station and hotel that it served, which once also housed railroad offices; it was constructed by Washington Kroeson, who acquired the property in April, 1849 and built it sometime between then and when his heirs sold the property in 1866. While Confederate General Thomas J. “Stonewall” Jackson was burning the other parts of the surrounding B&O yard district during the Civil War, he spared the hotel because it was privately owned. The structure itself is brick over a stone foundation and rises five stories at the track side and four at the street, with five bays and three uncovered porches facing the tracks. This building is evocative of the past importance of this railroad to the city and the respect shown rail travel in general.

The B&O, founded in 1827, is the oldest railroad in the United States, and more than 210 of its 379 miles are within West Virginia. Baltimore City and the state of Maryland constructed the B&O Railroad as a link to the agricultural Midwest and to commerce offered by the Ohio River. The first steam locomotive arrived in Martinsburg on May 12, 1842, and the city’s first passenger train that November.

The B&O built extensive shops and two roundhouses in Martinsburg, which are accessible from the station via a pedestrian overpass that crosses the tracks. The first roundhouse complex was completed by 1850 as part of the engine and machine shops needed to service the expanding company. The Civil War, however, threw the region into turmoil and Martinsburg in particular, as the B&O railroad was a strategic military target because its lines through Martinsburg traversed the boundary between North and South. In 1863, General Jackson stopped all trains going east at Martinsburg and Point of Rocks, Md., and destroyed 17 bridges, 36 ½ miles of track, 102 miles of telegraph wire; and stole or destroyed 42 locomotives and 386 rail cars. His forces also destroyed the Martinsburg roundhouses and rail yards. Martinsburg changed hands nearly 40 times during the Civil War, decimating a once-thriving community for a time.

Following the war, the B&O began reconstruction of the roundhouses and associated shops in 1866, and these are what visitors see on the 13-acre site today, including the completely-enclosed cast iron frame roundhouse. Reconstruction was completed in the span of six years, and the facilities were used from 1872 until the mid-1980s, when all local operations were transferred to other locations. The complex, placed on the National Register of Historic Places in 2003, has remained unoccupied by the railroad since they were abandoned in the 1980s. The pedestrian overpass, constructed in 2008, allows interested visitors to tour the historical and well-preserved complex more easily than the one automobile entrance, and the complex adds to the attractiveness of the station and the historic district as a whole.

The city partnered with the National Scenic Byway in 2002 to receive a Federal Highway Administration transportation grant of $290,000 to assist in the restoration of the former railroad hotel, now called the Caperton Office Suites. The grant was matched by $72,500 of in-kind support from individuals and community organizations, and the renovated offices opened in March of 2005. Today, the Washington Heritage Trail National Scenic Byways Welcome Center and Bookshop occupies the first floor. The organization promotes historic sites and routes in the Eastern Panhandle of West Virginia traversed by George Washington as a young surveyor and later as a landowner.

Also located at the station is the For the Kids, by George Children’s Museum, a product of the trail. Federal and state grants and the creative work of local architects Grove & Dall ‘Olio helped bring various interactive exhibits to life in the more than 6,000 square foot space. Visitors are invited to learn about Washington’s time in the area as a young surveyor, experience the region’s exciting railway heritage, travel along tunnels through time and take a virtual 3-D ride down the Washington Heritage Trail

The city of Martinsburg is sited on what was once the chief settlement of the Tuscarora peoples and the little stream that winds through the city and beside the B&O yard still bears the name of Tuscarora Creek. The earliest American settlers arrived in what is now the West Virginia “panhandle” region arrived from Pennsylvania via the ford at Shepherdstown in the 1720s. Martinsburg itself was founded by an act of the Virginia General assembly and by General Washington’s military colleague, Adam Stephen, who named it in honor of Thomas Bryan Martin, nephew of Lord Fairfax, to whom much of the northern Virginia lands once belonged.

The city has been a railroad town since the surveyors for the B&O came through in 1835, followed in 1841 by the laying of track through the city, which brought many more settlers. The town incorporated in 1859, with hopes of becoming the terminus of the Cumberland Valley Railroad. In 1872, the Martinsburg & Potomac Railroad was completed through Martinsburg. In the 19th century, Martinsburg’s industry also included foundries, mills—paper, wood and plaster—and distilleries.

Today, accessible both by rail and highway from Washington, D.C., Martinsburg is more than a far-flung suburban community for the nation’s capital. Major employers today include a Veterans Administration Center, the West Virginia Air National Guard, the U.S. Coast Guard’s Operations Systems Center and National Maritime Center, City Hospital, Quad/Graphics, EcoLab, Orgill and Quebecor World. The city houses one of the two Enterprise Computing Centers for the Internal Revenue Service; and the Bureau of Alcohol, Tobacco and Firearms also has a facility near Martinsburg, as does the National Institutes of Health.