Located on the north shore of Lake Mirror and designed to complement the promenade, the depot features soaring arched windows, Art Deco-inspired lamps and high-backed benches. 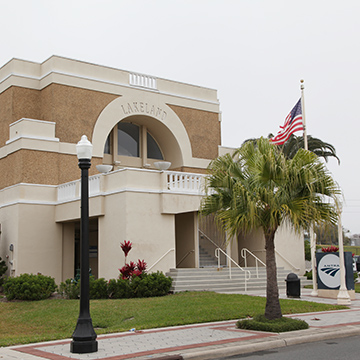 The city of Lakeland built the modern concrete and stucco depot on the northern shore of Lake Mirror. The $2 million building opened in February 1998 and features soaring arched windows, Art Deco-inspired lamps and high-backed benches. It was designed to complement the nearby Lake Mirror Promenade, which is listed on the National Register of Historic Places. With the construction of the new building, rail service returned to the heart of downtown Lakeland after having been relocated in the early 1960s to the western outskirts of town. Rail passengers now have easy access by foot to restaurants, stores, parks and government offices.

Although there is only one Amtrak station in Lakeland, it has two station codes: LKL and LAK. This is because it is located on the line to Tampa, where the Silver Star must reverse direction to continue south to Miami or north to New York. The train stops once to discharge passengers before going to Tampa, and then stops again to receive passengers after serving Tampa. The LKL code is used to book travel between Lakeland and points south, while the LAK code is for booking travel between Lakeland and all points north.

The Lakeland area was first settled in the 1870s, but only began to develop with the advent of rail lines through central Florida in the next decade. Then, Abraham Munn of Louisville, Kentucky, purchased 80 acres in 1882, in what is now the downtown. He platted the land to develop the town, which was incorporated on January 1, 1885. Several names other than Lakeland were considered, including “Munnville,” “Red Bug,” and “Rome City.”

Lakeland and other Florida cities, participated in the 1920s land boom and bust, re-emerging due to the arrival of the Detroit Tigers in 1934 for spring training. The team still trains in Lakeland, and owns the city’s Florida State League Team, the Lakeland Flying Tigers.

Renowned architect Frank Lloyd Wright was invited to come to Lakeland in 1938, at the request of Florida Southern College president Frank Spivey to design a “great education temple in Florida.” For 20 years, Wright worked on his “true American campus” creation which called for 18 buildings, only nine of which were ever completed. All of them were done in Wright’s “textile blocks” system, the first use of such a system in Florida. The campus is still the largest single-site collection of Wright buildings in the world, and influenced college architecture in Florida and elsewhere for years to come.

Prior to World War II, British airmen who later fought in the Battle of Britain were trained at Lakeland’s Lodwick field, which became famous for training pilots and bomber crews.