One of the oldest continually operating rail stations in the United States, the Italianate depot is embellished with a rich variety of woods harvested in Michigan. 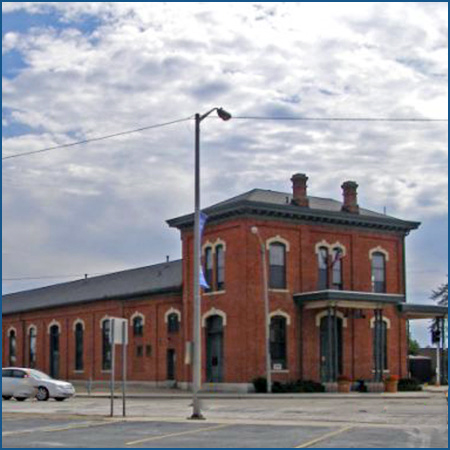 The Jackson station, one of the oldest continually operating rail stations in the United States, opened to passengers on September 1, 1873. The Michigan Central Railroad (MCRR) had turned to Henry R. Gardner, not an architect but a master builder for the railroads, to create the “grand central station” that stands today, and it served as a Union station for several railroads for many years. In 2002, the depot was placed on the National Register of Historic Places.

The station has a slate roof—an important feature, as it protected against fire from flying sparks from the steam engines serving the station, contributing to the station’s longevity. The station united all four main rail lines which came through Jackson when it was built, and tracks fanned out in nine directions from this central-Michigan transportation hub. This passenger station was once busier than Detroit’s and helped to solidify Jackson as a rail center through the 1960s.

Amtrak restored the station in 1978, and a mural in the waiting room recalls the French-built Turboliner trains used on the Wolverine Service in those years. In 2008, the Michigan Department of Transportation awarded a $300,000 grant to Amtrak to make structural renovations to the depot. This was supplemented the next year with an additional $938,000 in federal stimulus funds. By 2013, the following work was completed: repairs to the foundation and drainage system, mortar repointing and asbestos abatement. All work was done in accordance with federal guidelines for historic buildings.

Jackson began with the 1827 settlement of Horace Blackman on his new staked claim in central Michigan, approximately halfway between Battle Creek and Ann Arbor. Three years later, the new settlement proclaimed itself Jacksonburgh in honor of President Andrew Jackson, and in 1831 was declared the county seat by Governor Lewiss Cass. At that time, the name shifted to Jacksonopolis. In 1838, this was simplified to Jackson.

In 1841, the MCRR made the community its eastern terminus, which contributed greatly to its growth as a commercial center, even after the line was extended to Marshall. When the Michigan Southern Railroad completed its construction of the Jackson branch, Jackson became the only interior city in Michigan with two competing railroads—which kept transportation costs low in the area, and therefore made it an attractive shipping point. Additionally, the MCRR located a roundhouse, freight depot, and repair shops in Jackson. By the time the MCRR Union Station was built, the city also saw traffic from the Jackson, Lansing & Saginaw Railroad; the Fort Wayne, Jackson & Saginaw Railroad; the Grand River Railroad; and the Michigan Airline Railroad.

Jackson was also home to some of the first automobile parts manufacturers by 1901. Its automotive part makers remain one of the largest employers of skilled machine operators in the county. It is widely believed that the Ritz Cracker originated in Jackson with the Jaxon Cracker Factory in the early 1900s, the brand later being sold to Nabisco. Thomas Sperry of Jackson and Shelly Hutchinson of Baltimore, Md., founded S&H, issuing their well-known green trading stamps in Jackson in 1896.