Located between downtown and the Milk River, the depot was originally built in 1904 by the Great Northern Railway and later remodeled. A statue of "Empire Builder" James J. Hill stands out front. 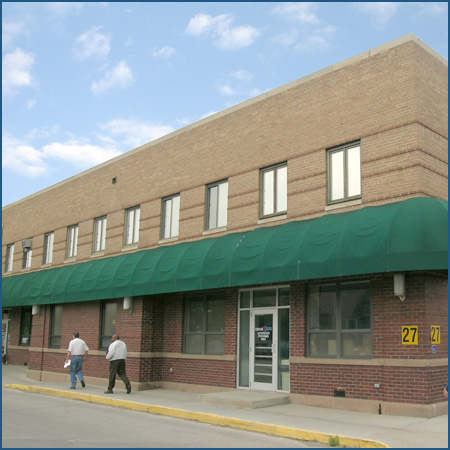 Located between downtown and the Milk River, the present Havre depot was built in 1904 by the Great Northern Railway (GN) and is the fourth passenger facility to stand in this general vicinity. As was common when a rail line was under construction, the first depot was actually a boxcar parked in 1887 at what was then known as the Bull Hook Siding—later renamed Havre. As the area became more settled, a second depot was built about three years later, but it was soon replaced in 1894 with the third building. This structure was in turn converted to railroad division offices when the current depot was built adjacent to it.

Although the depot dates to 1904, it has undergone significant remodeling over the last century. The first makeover occurred in 1910 to accommodate increased traffic from homesteaders seeking to build new lives in the region. At that time, the red brick depot received a hipped roof, and the interior was decorated with tile floors, mosaic trim and chandeliers.

Following World War II, the GN spent $150,000 to remake the building in a more fashionable streamlined style that included removing the roof and replacing it with a flat version. The 1949 work, which took nine months, also included building a second story using buff colored bricks shipped west from St. Paul, Minn. This led to the depot’s distinctive two-tone design; its horizontal orientation is further emphasized through brown brick belt courses encircling the upper floor, as well as a limestone water table on the first floor. When completed, the first floor contained separate waiting rooms for men and women, and the upper story held railroad offices. In conjunction with the depot renovations, the GN also constructed a new 23 stall roundhouse and machine shop to the east. Today, successor BNSF occupies several offices in the depot.

The GN, running from St. Paul to Seattle, is considered to have been America’s premier northern trans-continental railroad. It was formed in 1889 by James J. Hill, who orchestrated the merger of the St. Paul and Pacific Railroad with the St. Paul, Minneapolis, and Manitoba Railway. Hill holds a special place in railroad history and lore, and is known as the “Empire Builder.” Whereas most transcontinental lines were built with federal assistance in the form of federal land grants, the GN did not utilize this method.

Accordingly, a statue of Hill stands in front of the Havre depot in recognition of the key contributions the railroad has made to the city’s history. Just west of the depot, travelers can admire an impressive, well-preserved GN steam locomotive on display.