The red brick Queen Anne-style depot was completed in 1887 and renovated following a 1904 fire. Together with the soaring steel and wood train shed, the complex is designated a National Historic Landmark. 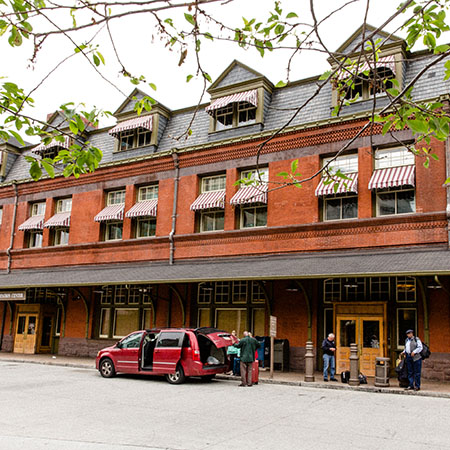 The Pennsylvania Railroad completed this Queen Anne-style train station in 1887. Now known as the Harrisburg Transportation Center (HTC), Amtrak uses part of the main floor for its passenger operations. The Harrisburg Redevelopment Authority leases the rest of the building from Amtrak.

The station’s distinctive mansard roof was reconstructed in 1905 after a serious fire the previous year. In 1922, more than 100 trains arrived and departed here each day. This is one of the few railroad stations in the United States that still maintains a train shed above the track and retains a red brick exterior. The HTC is listed on the National Register of Historic Places and is designated as a National Engineering Landmark. The current station is the third train station on the same site. The first was built in 1837, which gave way to the second in 1857.

The facility is a three-level structure, with the lower level serving as a terminal for Greyhound and Trailways buses. Capitol Area Transit (CAT), the city’s local bus provider, also serves the facility at street level. Some of the commercial space in the Transportation Center is going to be turned into an incubator for technology startup companies. Temporary housing for the Harrisburg Technology College is presently under construction.

A multimillion dollar upgrade to the building was completed between 1982 and 1986. Additional upgrades were completed in May 2007. These improvements included an exterior plaza upgrade involving the removal of the existing cobblestone pavers and installation of a new roadway, flower beds, flagpoles and major deck repairs. The interior work included fire system upgrades, painting, repair or replacement of floors, walls, wood panels, rails, lavatories, other plumbing, replacement of one elevator and modification of another, ceilings, beams, new air handling units and station roofing.

In January 2016, PennDOT announced it would invest $15 million in state and federal funds to make state of good repair improvements to the transportation center, including doors, windows, ventilation systems, and other structural work.

Harrisburg was believed to have been inhabited by Native Americans as early as 3000 BC and was known to Native Americans as “Peixtin” or “Paxtang”. This was a major resting area for Native American traders because of the intersection of the trails leading from the Delaware to the Ohio River, and from the Potomac to the Upper Susquehanna. Contact was first made with the Native Americans in the area by Captain John Smith, an Englishman who traveled from Virginia up to the Susquehanna in 1608 and visited with the Susquehanna tribe. In 1719, John Harris, another Englishman, settled here and secured 800 acres. In 1733, he was granted a license to operate what was later known as Harris’s Ferry. His son, John Harris, Jr., layed out the town in 1785 and named it Harrisburg.

The Commonwealth of Pennsylvania chose Harrisburg as its capital in 1812, when the cornerstone of the new capital was laid in 1819 by Governor William Findlay.

Harrisburg also became a major training center for the Union Army during the Civil War with thousands of troops passing through Camp Curtin. It was also a major center and vital connection point between the Atlantic Coast and the Midwest, with several railroads running through the city and over the Susquehanna River. Harrisburg has hosted the Pennsylvania Farm Show every January since 1917.