Following a renovation that included moving and rotating the historic structure, the Hamlet depot now serves as a museum and site of a popular annual railroad festival. 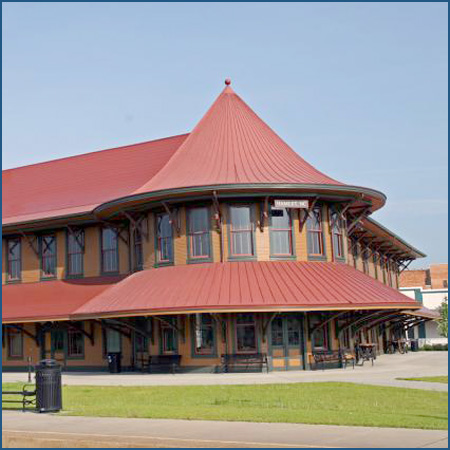 The Hamlet depot, the only Victorian Queen Anne style station in North Carolina, was built in 1900 for the Seaboard Air Line Railroad as both a passenger station and division headquarters. This two-story station was originally constructed at the crossing of the Raleigh and Augusta Air Line and Central Carolina Railways. Restoration of the depot was completed in 2004, at a cost of $11.7 million, a joint project of the City of Hamlet and North Carolina Department of Transportation (NCDOT), utilizing federal transportation funds.

The restoration of this station was many years in the making with the drawings and preparations beginning in 1997. By 1999, CSX, the successor to the Seaboard Air Line, notified the city and NCDOT of a concern about restoring a building surrounded by active railroad tracks, so it was decided that the station should be moved to a less active area, southward across the east-west rail line, and rotated 90 degrees, to sit along Main Street, which was also realigned to accommodate the station. In 2001, CSX sold the station to the city of Hamlet for $1. In 2002, the 1942 brick addition was demolished and the original structure stabilized. In March of 2003, the moving company began preparing the building for the move and the station was jacked up and rotated. By April 4, 2003, the station had been moved 210 feet across the tracks to its new foundation and stabilized. Renovations began that summer and were completed by the fall of 2004.

The city of Hamlet dedicated the station to NCDOT Board of Transportation member, G. R. Kindley. The depot has received the Historic Preservation Society of North Carolina’s 2005 Carraway Award for outstanding preservation work by public agencies. The station has been on the National Register of Historic Places since 1992.

In the late 1800s, John Shortridge established a woolen and saw mill along Marks Creek in the sand hills of North Carolina. In 1879, a railroad running from Wilmington passed through the area that would become Hamlet to the Pee Dee River, where it connected to a line running to Charlotte. Another railroad was being built from Raleigh through to Augusta; it was through the influence of early residents that these tracks also crossed through Hamlet. The town originally got its name from Mr. Shortridge, who observed to his friends that in his native England, such small villages were called “hamlets.” Hamlet was not incorporated as a city until 1897.

Hamlet grew with the railroad, as it provided hospitality for travelers passing from New York to Florida. By 1936, Hamlet was dubbed the “Hub of the Seaboard,” with five Seaboard Air Line Railroad lines leading out from the city and about 30 passenger train departures each day. Freight trains still come to Hamlet for maintenance at the CSX Transportation Maintenance Shops. The citizens of Hamlet today host the railroad-themed Annual Seaboard Festival Day on the fourth Saturday in October. The Hamlet depot is also home to a museum tracing the rail history of the area. It includes hands-on exhibits, visual displays and interactive consoles.

Hamlet is also the birthplace of legendary jazzman and saxophonist John Coltrane, and of the first African-American Marine Corps officer, Frederick C. Branch.