The 1915 Gothic-inspired depot features walls of Holmesburg granite accented with limestone trim. Following a recent restoration, it houses a waiting area and the chamber of commerce. 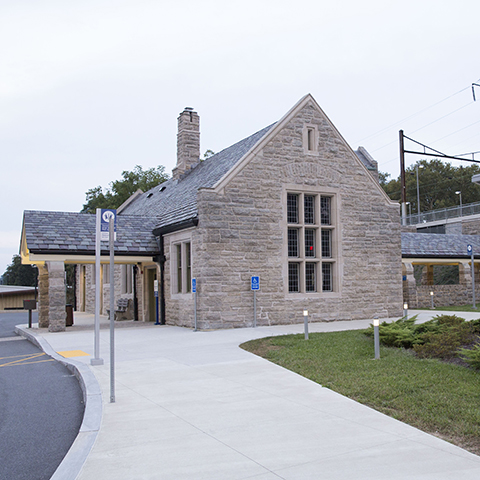 Elizabethtown is a station stop for the Keystone Service that connects Philadelphia and the state capital at Harrisburg, as well as for the Pennsylvanian that runs between New York City and Pittsburgh. Frequent service throughout the day on the Keystone Corridor makes Elizabethtown a popular boarding point for commuters headed to Harrisburg, which is only 20 minutes away by rail.

Closed in 1977, the station building sat abandoned for more than three decades as town officials labored to raise funds and plan for its rehabilitation. While the building was shuttered, Amtrak riders continued to use the platforms to access the trains; unfortunately, the original passenger shelters that were designed to complement the station fell into disrepair and had to be removed.

Rehabilitation work was completed in early 2011, and on May 4th, a ribbon cutting ceremony was held to celebrate the station’s rebirth. A wide variety of town and regional transportation officials were in attendance. In addition to the formal ceremony, residents and visitors were able to explore the building and grounds, as well as peek into restored Pullman cars. The Elizabethtown station now includes a waiting room and restrooms, as well as Quik-Trak machines from which customers may purchase tickets. The remainder of the station is occupied by the local Chamber of Commerce.

The improved transportation facility is envisioned as an anchor of a new mixed-use zoning district in the southern portion of the borough. The area’s master plan calls for a future network of pedestrian and bicycle pathways that will connect the station with downtown to the north. Sycamore Square, a real estate development project, has also been completed within walking distance of the train station on the campus of the Masonic Village, a retirement community located south of the tracks.

The Elizabethtown depot first opened to the public in 1915, and was built by the Pennsylvania Railroad (PRR). Strategically sited with entrances on the north and south sides of the embankment that supports the railroad right-of-way, the station easily served residents of the Masonic Homes and the town. Visually, the depot clearly references the architecture of the nearby Masonic Grand Lodge Hall which was designed in the Collegiate Gothic style by the well known Philadelphia-based firm of Zantzinger, Borie & Medary. The cornerstone of the Grand Lodge Hall was laid in 1911; two years later, the architects were hired by the PRR to draw up plans for an improved passenger station.

The one story structure features a steep, gabled slate roof and a tall chimney. Walls of rough Holmesburg granite are laid in a random ashlar pattern that is accented by smooth-cut Indiana limestone used for window and door trim as well as coping. The passenger waiting room, which features warm, rich wood paneling and decorative roof trusses, is brightened by sunlight that enters through a tall window on the west façade. Passengers exit the station to access staircases to the platforms, as well as the tunnel to the south side of the embankment. The station site also includes a free-standing tower that houses an elevator to transport passengers between the station grounds and the platforms located on the top of the embankment.

Since the station was specifically designed to relate to the buildings of the Masonic campus, it includes complementary detailing such as leaded-glass windows, oversized granite quoins, and large, heavy timbers used in areas such as the front porch. The material palette projects a sense of stability and solidity that speaks not only to the great structures of the Gothic Age, but also to the image of the PRR, which at the dawn of the 20th century was one of the nation’s most influential corporations.

After being closed for over a decade, borough officials proposed a renovation of the facility in the early 1990s to better serve local residents and to spur a revitalization of the southern edge of town. Improvements were to include a renovated station building, paved parking lot, and better access to the platforms. In order to initiate the project, the borough leased the station property from Amtrak in 1998 for $1 a year and began to search for funding. By the 2000s, the borough had obtained nearly $2.2 million in federal, county, and private grants to kick-start the renovation work, but the efforts were set back when Amtrak was unable to fulfill its $500,000 pledge due to financial difficulties.

While the borough attempted to adjust its funding package, the Commonwealth of Pennsylvania and Amtrak announced the “Keystone Corridor Improvement Project” in 2004. The goal of the multi-year undertaking was to improve the 104 mile rail line in order to allow for all-electric train service, increase top speeds to 110 mph, and add train frequencies including express options. To accomplish these goals, the electric system to power the trains was replaced and continuous welded rail and concrete ties were installed. Infrastructure upgrades have greatly impacted ridership along the Keystone Corridor, especially at Elizabethtown where the number of boardings and alightings more than doubled from 2004 to 2010.

A byproduct of these investments in rail infrastructure was a renewed focus on the stations along the corridor, as passenger numbers were expected to rise once the improvements were completed. Elizabethtown and Lancaster were the first stations to receive attention. During this period, the United States Department of Transportation issued new guidance on platform specifications for commuter and intercity passenger rail stations. The document suggested that platforms run the full length of the passenger boarding area and be high enough to facilitate level-boarding. Elizabethtown revised its plans accordingly, which also included the installation of elevators on the inbound and outbound platforms.

In recognition of the benefits of increased train travel, such as the reduction of roadway congestion and harmful emissions, and the fact that the borough’s plans were up-to-date, the rehabilitation project was granted full funding under the American Recovery and Reinvestment Act of 2009. Elizabethtown received $9.3 million distributed under two grants administered through the Pennsylvania Department of Transportation. Half a million dollars was spent on the rehabilitation of the depot building. The remainder was devoted to the installation of new platforms, ramps, elevators, a parking lot, and landscaping. Because the borough had continually updated its plans in response to various demands, the work was able to be contracted out within a short period of time.

Groundbreaking for the 15-month project took place in August 2009 and was attended by U.S. Senator Arlen Specter, U.S. Transportation Secretary Ray LaHood, borough and county officials, and local townspeople. Work on the station began in the basement where workers followed Environmental Protection Agency standards to remove old transformers that contained toxic Polychlorinated biphenyls (PCBs). Asbestos was also removed from the caulking around windows. Lead paint was stripped from the station interior and drywall was installed.

The new platforms were constructed of precast concrete sections that were assembled on site, and the edges are lined with tactile pavers. Ramps and elevators allow wheelchair users to access the platforms while metal and glass canopies protect passengers from inclement weather as they wait outside for the arrival of the train.

To retain the historic character of the station, the flooring, woodwork, and lighting was restored, and the leaded glass windows, which were missing many small panes of glass, were removed and fixed. Exterior granite walls were cleaned and the mortar re-pointed to prevent water infiltration and damage to the stonework. Craftsmen also replaced the slate roof because the texture and color variations of the stone were considered essential to the building’s character.

Inside, the basic systems, including electrical, mechanical, and heating, air conditioning and ventilation, were modernized to provide a more comfortable setting for passengers. Restrooms were installed and are accessible. The existing parking lot was repaved and features fully accessible parking stalls.

Elizabethtown’s history is long and rich. In 1730, Thomas Harris purchased a large plot of land along Conoy Creek where he established a trading post to encourage commerce between the local Conoy American Indians and European colonists, many of whom were Scots-Irish. The Conoy supplied them with pelts in exchange for goods such as blankets, pots, and knives. Barnabas and Elizabeth Hughes of County Donegal, Ireland, later purchased the trading post, and according to town histories, Barnabas Hughes proceeded to lay out a town which he named after his wife. Elizabethtown was incorporated as a borough on April 13, 1827.

In the first quarter of the 19th century, the nation’s transportation system began to undergo radical expansion that changed how people and goods were moved over long distances. New York State finished the Erie Canal in the 1820s and Maryland could boast of the National Road. Farsighted leaders in Pennsylvania pushed for a similar transportation corridor to link Philadelphia with Pittsburgh. Located at opposite ends of the state, the former was an important Atlantic Ocean port and cultural center, while the latter provided access to the Ohio River and the productive agricultural lands of the Midwest. Rushing to catch-up, by 1836 Pennsylvania had completed the Main Line of Public Works, a system of railroads and canals that reduced travel time across the state from weeks to four days.

Maintenance proved expensive, prompting the state to sell the Main Line to the PRR in 1857. Originally chartered to run from Harrisburg to Pittsburgh, by 1855 the railroad covered the entire distance between Philadelphia and Pittsburgh and severely cut into the Main Line’s profit margin. The PRR undertook a program to modernize, straighten, and realign the tracks, and cities along its path prospered as points of trade where rural farmers and manufacturers could ship their goods to distant markets. In Elizabethtown, Klein Chocolates constructed a facility near the tracks where it made sweet treats that combined local milk with cocoa beans and sugar shipped in over the PRR. In the 1970s, this facility was purchased by M&M Mars and today produces popular candy bars such as 3 Musketeers.

Elizabethtown remained primarily agricultural until the early 1900s, and then urbanized rapidly after World War II. Today, the city’s small town charms draw residents, many of whom commute to work in Harrisburg and Lancaster. The historic downtown also bustles with students from Elizabethtown College, an institution of higher learning noted for its liberal arts programs.