A depot opened in 2016 is marked by a sloping, angled roof and walls of glass that allow abundant natural light to flood the airy waiting room. This was the first station completed as part of a larger program to bring high-speed rail service to the busy Chicago-St. Louis corridor. 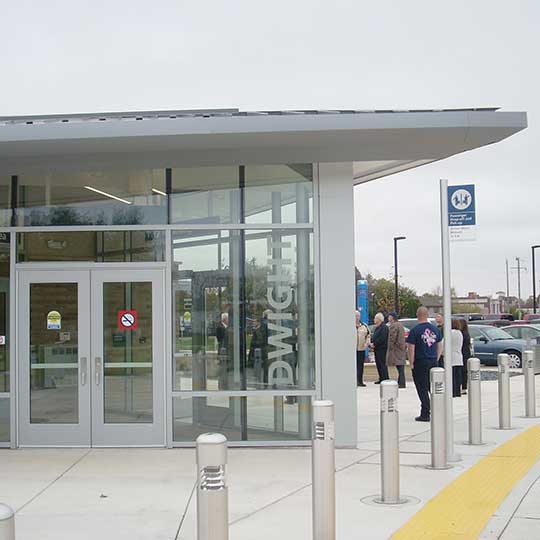 Amtrak service to Dwight began on October 27, 1986. Nearly 500 people – including a group of kindergartners – gathered at the historic Chicago and Alton Railroad (C&A) depot to mark the occasion, which included speeches by village, state and Amtrak officials and music by the Dwight High School band. Service initially consisted of the daily Loop (Chicago-Springfield) and State House (Chicago-St. Louis).

Thirty years to the day, on October 27, 2016, the community gathered once again to celebrate the opening of a new $3.3 million depot located about one block southwest of the old facility. It is the first of many new or renovated passenger facilities planned between Chicago and St. Louis as part of a larger, multi-year program to enhance rail service in Illinois. The event included remarks by Illinois DOT (IDOT) Secretary Randy Blankenhorn. Lincoln Service (Chicago-St. Louis) trains began making regular stops at the new station the following day.

The old depot, which opened in spring 1892, will continue to house the Dwight Historical Society museum and the Dwight Chamber of Commerce. Chicago architect Henry Ives Cobb, who also designed buildings at the University of Chicago, the Newberry Library and the Chicago Post Office, drew up plans for the Dwight depot. It is one of the few remaining late 19th century stations still standing between Chicago and St. Louis. It replaced a smaller wooden building that had been on the site since 1854, shortly after the village was founded.

The 75-foot by 25-foot depot was built in the Richardson Romanesque style, which is strongly associated with the Boston architect Henry Hobson Richardson. The style is characterized by squat, compact buildings usually constructed with unfinished stone in dark red, tan, brown and gray hues. The asymmetrical compositions were often pierced by deep-set, round arches reminiscent of medieval Romanesque structures found in Europe; polychrome decoration was also a common feature.

Walls of rock-faced Bedford blue stone from Indiana rise from a foundation of Joliet stone. Due to the stone’s textured surface, it displays an ever-changing interplay of shadow and light as the sun moves across the sky. Both of the central cross gables have a pair of double-hung windows on the ground floor; the second floor features coupled windows with a Gothic fanlight and the name “Dwight” carved into the stone above it. An elaborate finial tops off each cross gable. Passengers were protected from inclement weather by a deep canopy. The original gabled roof and canopy featured durable slate tiles – an incombustible necessity in the age of steam engines.

Two waiting rooms, each with a fireplace, occupied the ground floor. Cathedral ceilings in each waiting room had open rafters and oak wainscoting that created light and airy spaces. The ticket office stood in the center, marked by a projecting trackside bay that allowed the station master to monitor traffic up and down the rail line. The road master had his desk on the second floor.

In 1946 the interior was remodeled: the fireplace in the north waiting room was torn out, the ticket office reduced in size and the interior painted in a tan and light brown combination. The slate roof was also replaced with mule-hide sheeting. New fixtures were put in the restrooms and fluorescent lighting installed. Just south of the depot stands the stone freight office, which was built in either 1892 or 1893. In 1986 it was remodeled to become the home of the Dwight Chamber of Commerce.

Intercity passenger rail service at Dwight ceased in 1971, when newly-formed Amtrak took over most of the nation’s intercity passenger rail services. The depot was then used as an office and storage space for the Illinois Central Gulf Railroad, successor to the Gulf, Mobile & Ohio, which had in turn subsumed the C&A. Maintenance was subsequently neglected, but the building was placed on the National Register of Historic Places in 1982.

In 1983, the depot was renovated for use as the Village Hall. When Dwight built a new Village Complex in 1998, it offered the depot to the Dwight Historical Society. The society moved its museum into the north end of the building; the south end holds both a meeting room and the office of the Dwight Chamber of Commerce.

As with other neighboring central Illinois towns, Dwight began as a locomotive watering stopover. The Chicago and Mississippi Railroad sent surveyors in the early 1850s to this prairie location, and while the stop was just two small buildings and a water tank, James Spencer, Richard Price Morgan, John Lathrop and the brothers Jesse and Kersey Fell of Bloomington participated in laying out a town that they would name for Henry Dwight, who had funded most of the building of this section of the railroad.

The Fell brothers were developers who had been instrumental in founding other central Illinois towns, including Clinton, Normal, Pontiac and Towanda; the other partners were also railroad and civil engineers. The Chicago and Mississippi Railroad was soon succeeded by the C&A, and theirs was the first passenger train to stop in Dwight in 1854. The village, as with others founded in Illinois in the 1850s, was designed without a central square. Instead, it centered on the depot ground, a widened area of railroad property about 1,000 feet long by 200 feet wide.

The best-remembered event in the village’s early history came at 6:27 p.m. – so important an event that the time was recorded – on Saturday, September 22, 1860, when Queen Victoria’s son, Prince Albert, stepped off the train in Dwight for a week of hunting prairie chickens and quail while visiting James Spencer, one of the town’s founders. Prince Albert went on to become England’s King Edward VII, and the people of Dwight are still pleased to talk about that visit. In 1878, Spencer’s estate, where the prince stayed, was improved by well-known American architect Ossian Cole Simmonds; it was given to the town in the 20th century and has since become Renfrew Park.

Dwight began growing rapidly in the 1870s, with significant railroad traffic through to Chicago from St. Louis, and the town hired Henry Ives Cobb to design their larger, grander railroad depot. Another equally splendid although quite different historic building stands across West Main Street, the solid and low-slung Frank L. Smith Bank – now the First National Bank of Dwight – designed by Frank Lloyd Wright in the Prairie style and opened in 1906. Across the depot ground stands the Bank of Dwight, which possesses a less imposing façade but features a large barrel-vaulted skylight and farm scene murals painted by Viennese artist Oskar Gross.

Another organization for which the village is famous is the Keeley Institute, known for the Keeley Cure, a “scientific” method of curing alcoholism with injected gold chloride, begun in 1879. Dr. Leslie Keeley, a Civil War surgeon and John Oughton, an Irish chemist, formulated the process of a gradual month-long treatment that weaned the sufferers away from drink gradually. Keeley came to Dwight after the war and continued the study of alcoholics that he had begun among Union soldiers.

The institute operated until 1965, and took up a number of buildings of note in the village, becoming a major force in the development of the community. The Keeley Cure demonstrated a fundamental shift in treatment, attributing a physiological nature to alcoholism, and while this admittedly commercial process drew sharp criticism from practitioners of traditional medicine at first, it was remarkably humane and successful for its time. The Keeley Institute treated more than 400,000 patients, including 17,000 physicians and many hundred women, and had branches in California, Arkansas and North and South Carolina. As the founders and their heirs passed away, the institute, once of international fame, died out as well in the 1960s when hospitals began treating alcoholism.

The Dwight Veterans Hospital occupied the old buildings of the Keeley Institute and the Livingston Hotel from 1919 to 1965. The Keeley Building now houses an investment firm, attorney and insurance offices. The Keeley Office Building, built in 1891 and standing across from the depot, was rebuilt after a fire in 1902 into a handsome brick and stone Greek revival structure featuring glass windows made by the studio of Louis J. Millet.

Millet was a student of Louis Comfort Tiffany (1848-1933), a renowned American artist and designer who worked in the decorative arts and is best known for his work in stained glass. He is the American artist most associated with the Art Nouveau and Aesthetic movements.When the Veteran’s Administration vacated the building in 1965, the state of Illinois took it over and it now houses the W.W. Fox Children’s Developmental Center.