The “Lake-Park Region” is renowned for more than 400 lakes that provide opportunities for recreation throughout the year including swimming, boating, jet-skiing and ice-fishing. 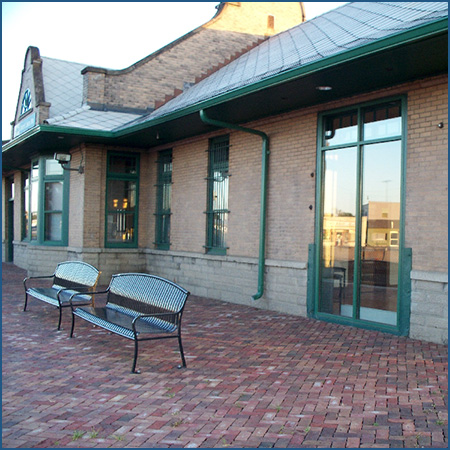 The Detroit Lakes station was renovated in 2010; the sensitive design work upgraded the facility for the 21st century while respecting its historic character. The depot was originally constructed by the Northern Pacific Railroad in 1907-1908 according to designs by John Skooglun, an architect who worked on various projects for the company.

The one-story station sits low to the ground and has a rusticated grey concrete block foundation topped by a cut-stone water table upon which rise walls of buff brick. A molded convex brick cornice elegantly completes the transition from the exterior walls to the roof. The building arrangement includes a central portion marked by a pitched roof; prominent end gables are crowned by parapets with demi-lune caps that lightly reference a Flemish or Jacobean Revival aesthetic. The end gables also assist the eye as it shifts to the two flanking, slightly lower wings with hipped roofs.

Trackside, a gable with a semi-circular window and parapet breaks the roof line. All of the gables—with parapets finished with stone coping—add a strong vertical element to an otherwise horizontal architectural composition. The primary facades have elegant bowed bays; the trackside bay allowed the station master an unobstructed view down the tracks so that he could monitor traffic on the rails. The other windows throughout the building are one-over-one with nine light cottage-style transoms. The original diamond patterned slate roof is still in place and in good condition; it creates deep eaves that shelter passengers from winter snows and summer rains.

The east wing provides an open-air sitting area that adjoins the waiting room. When summer high temperatures reach into the 80s, the porch becomes very popular with travelers wishing to catch a gentle breeze. Brick columns support the porch roof and feature egg and dart molding. The west wing is the former freight storage area, indicated by the heavy wood doors that open on to the platform and the secure metal bars over the windows. According to old photographs, the exterior of the station has not undergone any serious modifications.

The central waiting room showcases gracious 18 foot ceilings that create a feeling of relaxed airiness, a perfect introduction to a city famous for its beautiful natural spaces and resort hotels. According to original plans, the interior arrangement of the depot’s central section was typical of its time in that it provided space for a ladies waiting room as well as a men’s smoking room. The baggage room was located on the west side and had large doors leading to both the tracks and the street. Whereas the waiting room had handsome birdseye maple floors, the more utilitarian baggage room was laid with oak. The interior walls have a section of five foot high wainscoting executed in white enameled tile which also forms a baseboard. In recognition of its important role in the community’s history and the strong integrity of its historic fabric, the depot was placed on the National Register of Historic Places in 1988.

The recent renovation was completed under the direction of the local White Earth Reservation and the Minnesota Department of Transportation. The exterior brickwork was cleaned and the wood soffits below the eaves were repaired. All of the wood trim around the windows and doors was repainted in a bright turquoise color that would brighten any dreary winter day.

Inside, the white tile wainscoting gleams once again, and the richness of the dark polished wood used in the square-edge trim around the windows and doors provides a warm contrast. Some of the original white birch benches remain in place. An interesting design move took place in the former freight room: the wide doors leading to the platform and street were relocated to the interior of the room and large panels of glass were inserted into the door openings. This allows in ample natural light while also preserving the original wood freight doors which now act like screens that slide within free-standing frames.

As far back as the 1850s, railroad promoters began to dream of lines crossing Minnesota and connecting it to the coasts. Not much came of these discussions, although numerous lines were chartered and companies attempted to sell stock with little success—the legislature authorized not less than twenty-seven railroad companies between 1853 and 1857. In 1864, Congress chartered the Northern Pacific Railway Company (NP) to connect the Great Lakes region with Puget Sound in the Washington Territory. It took another six years and the powerful financial backing of Philadelphia financier Jay Cooke before ground was broken west of Duluth at Thompson Junction. Once stoked, momentum pushed the NP track laying teams from east and west until the 2,800 mile main line across the northern United States was finished in 1883—former President Ulysses S. Grant drove in the “golden spike.”

As early as 1867, the United States government established the White Earth Reservation north of the small settlement that eventually became Detroit Lakes. It was so named for the layer of white clay found beneath the surface of the soil in the western portion of the designated reservation. Many of Minnesota Territory’s American Indian groups were coerced into moving to White Earth, including the territory’s Ojibwe and Lakota bands. Today, many of their descendents self identify as “Anishinaabe” instead of Ojibwe or Chippewa.

Early settler Melvin Tyler had built a log cabin along the Pelican River north of the tracks in 1870. The area was along one of the international Red River Ox Cart trade routes connecting the Red River colony in Manitoba, Canada with the Mississippi River at Mendota and Saint Paul. Furs and other goods produced in the interior moved over the trails and down the Mississippi River to distant markets. By 1871, the young community of Tylertown found itself along the route of the NP as it moved west through Minnesota lake country; the railroad also signaled the decline of the ox-cart trails. The arrival of the railroad made Tyler’s cabin the center of the community, and it subsequently acted as a hotel and post office.

With the railroad came George Johnson who purchased land on the south side of the tracks and called the area “Detroit.” According to a local story, a traveling French Catholic priest camped along the lake near the new town and thought that when the sun shone on the body of water it resembled a “détroit,” or “strait.” The name stuck and Johnson used it for his new settlement; by 1880, most of the residents had migrated from Tylertown into the new area to be closer to the tracks and the lake itself. The NP also sponsored a group of settlers from New England who moved west and began settling in Detroit and the surrounding countryside in 1872.

Along with the first depot, the quick growth of the town encouraged the railroad to build a grain warehouse and a roundhouse north of the present depot. The first major industry in Detroit was tied to the Northern Pacific. The Fargo-Detroit Ice Company cut and prepared ice and bottled Pokegama spring water for the railroad’s dining cars. It was not until 1926 that the townspeople voted to rename their municipality “Detroit Lakes”—many residents were tired of their mail and parcels being sent to the bigger and better known Detroit to the east.

Private homes and resort hotels like the grand Hotel Minnesota began to line the shores of the lakes and bled into forest landscapes. To further facilitate long-term tourism, developers constructed a series of canals and locks that eventually connected Lakes Detroit, Sallie, Melissa, and Pelican. Today the “Lake-Park Region” is still renowned for its more than 400 lakes which provide opportunities for recreation throughout the year including swimming, boating, jet-skiing, fishing, and ice-fishing. Detroit Lakes’ population grows dramatically each summer as families take vacation.

In addition to trips to experience the best of nature, visitors also flock to Detroit Lakes in July for the “10,000 Lakes Festival,” a large, three-day concert that draws major acts and tens of thousands of music lovers. A month later, the city hosts “WE Fest,” a country music festival that again attracts top talent. A tent city springs up overnight to accommodate the 50,000+ fans who come from far and wide to enjoy the multi-day event.