A soaring Art Deco masterpiece and a National Historic Landmark, Cincinnati Union Terminal is also a museum and cultural center where discoveries await. 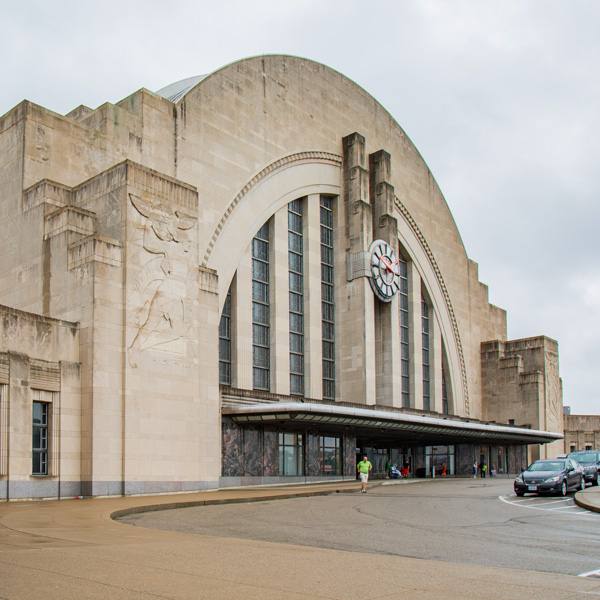 Cincinnati Union Terminal, one of America’s great Art Deco rail stations, was completed in 1933 and covers about 500,000 square feet. Its principal architects were Alfred T. Fellheimer and Steward Wagner, with architects Paul Phillippe Cret and Roland Wank brought in as design consultants. New York-based Fellheimer and Wagner were well known by the 1920s for their work on train stations, which included structures in Erie, Pa., South Bend, Ind., Buffalo, N.Y., and Greensboro, N.C.

In Cincinnati, their famed creation remains a symbol of the railroads’ power and glory in the first half of the 20th century. However, Cret was largely responsible for the building’s signature style, and he is often credited as the building’s architect. Its ten-story, half-domed limestone and glass main entrance hall was the only half dome in the Western Hemisphere and the largest in existence when it was constructed (today it is the second-largest in the world).

Standing one mile north of the center of Cincinnati, the main facade faces east over a quarter-mile plaza on what was once Lincoln Park. Visitors are greeted by an illuminated fountain with cascade and pool. The dome is flanked on either side by curving wings, and on either side of the main entry doors, Maxfield Keck’s bas-reliefs depicting “Transportation” and “Commerce” keep watch.

The 14 industry murals were removed during demolition of most of the passenger concourse in 1974 and found a home on display at the Cincinnati/Northern Kentucky International Airport. In 2016, they were relocated to the city’s convention center where they are mounted on the exterior for passersby to enjoy. The world map was the only mural not preserved. Reiss is also well-known for the portraits of Blackfeet American Indians that he painted for the Great Northern Railway from the 1920s to the 1940s. Many would be used in the railroad’s advertisements to encourage travel to Montana and Glacier National Park.

As a major center of railroad traffic in the late 19th and early 20th centuries and an interchange point between the Northeastern and Midwestern states, Cincinnati had no fewer than five downtown passenger stations. As early as the 1890s, the railroads began negotiations to create a union station to consolidate and simplify passenger traffic; however, it would take until 1928 for the seven railroads and the city to come to agreement, after intense lobbying led by Phillip Carey Company President George Crabbs. The seven railroads involved in the agreements were the Baltimore and Ohio; Chesapeake and Ohio; Cleveland, Cincinnati, Chicago and St. Louis (“Big Four”); Louisville and Nashville; Norfolk and Western; Pennsylvania; and Southern.

Construction began in 1928 with considerable site preparation and grading of a portion of the Mill Creek flood plain on which the terminal was to stand, under the auspices of the newly-formed Union Terminal Company. The terminal building itself was begun in 1931 and the station opened on March 31, 1933. The total cost of the project was $41.5 million.

During its heyday, Union Terminal saw 216 trains per day. While it had a brief revival in the 1940s because of World War II, it began to decline in the 1950s. By the time Amtrak began operations in 1971, service was reduced to just two trains a day, the George Washington / James Whitcomb Riley (Washington/Newport News – Chicago). The terminal was abandoned for transportation purposes in 1972 in favor of a much smaller passenger rail station built by Amtrak on the city’s riverfront (now demolished).

In the 1970s, adaptive reuse became an option due to the expense of tearing down such an immense structure. Union Terminal was added to the National Register of Historic Places in 1972 and declared a National Historic Landmark in 1977. By 1975 the city had purchased the building and sought to lease it. Within a few years, the Joseph Skilken Organization reopened the terminal as an entertainment and shopping complex, “Land of OZ,” investing more than $20 million for renovations, restaurants, a bowling alley and a roller-skating rink as well as shops. Although this venture began with 40 tenants at its 1978 opening, a recession saw them reduced to 21 by 1982.

The terminal stood empty for several years after the closing of the Land of OZ project. In May 1986, efforts led to a bond levy to save the terminal from demolition and transform it into the Cincinnati Museum Center (CMC). Cincinnati’s then-Mayor Jerry Springer was a major proponent of this transformation. The new center opened in 1990, taking advantage of the terminal’s vast spaces, and now is home to half a dozen museum organizations.

Renovations also allowed the return of Amtrak service to the building – via the Cardinal – on July 29, 1991. The state of Ohio and the city of Cincinnati contributed to this restoration with grants of $8 million and $3 million, respectively; and more than 3,000 individuals, corporations and organizations contributed as well. Since its 1990 reopening, the terminal has attracted more than one million visitors each year.

In 2008, Union Terminal celebrated its 75th birthday with a month-long calendar of festivities, culminating with a tour of the terminal as it was in the 1940s. In November 2014, the voters of Hamilton County, which includes the city of Cincinnati, overwhelmingly passed Issue 8, a measure to increase the county’s sales tax by one-quarter of one percent over five years. The funding—estimated at nearly $176 million—was dedicated to the rehabilitation of Union Terminal.

A two-and-a-half-year rehabilitation and improvement project, estimated to cost approximately $228 million, began in July 2016 and concluded in November 2018. This was the first full structural restoration in Union Terminal’s history, and skilled workers and craftspeople worked in nearly every area inside and outside the building. In addition to the funding obtained through the passage of Issue 8, the project used state grants ($5 million), private donations ($7.5 million) and state and federal historic tax credits ($39 million).

During the project, some components of the CMC temporarily closed, but staff worked with partners around the region to ensure historic and scientific objects were available for viewing at other venues. GBBN Architects served as architect and design lead with Turner Construction serving as construction manager.

Highlights of the rehabilitation include updated mechanical, electrical, heating and air conditioning systems; completion of a new brick face on the rear of the building, where the concourse originally connected with the main building, that is more structurally sound; repointing of the mortar on the exterior to ensure the terminal envelope is watertight; cleaning of the more than 53,000 terracotta tiles lining the interiors of the ramp structures on either side of the Main Hall; and cleaning and restoration or reproduction of nearly 700 historic light fixtures, including outfitting with more energy efficient LED lights.

For the Losantiville Dining Room, which once held a serpentine lunch counter, art restorers in New York City concentrated on bringing 22 canvas murals by French-born artist Pierre Bourdelle back to life. Removed from the space in the 1980s, the murals were cleaned and repaired, removing decades worth of cigarette smoke and grime. The colorful pieces, hung just below the ceiling, depict animals, fruits, vegetables and other foodstuffs.

In front of the building, the impressive plaza and fountain – which cover an area the size of two football fields, were disassembled and rebuilt. The areas below, which form the roof for portions of the lower level including the Duke Energy Children’s Museum, were waterproofed. The fountain’s signature scalloped tiers were recreated and the aluminum and glass light standards around the plaza were repaired. Landscaping, including flowers and shrubbery, was also refreshed.

Following completion of this extensive work program, Union Terminal is more energy efficient and sustainable, and its historic exterior and interior spaces have been preserved for future generations.

In 1793, Israel Ludlow surveyed what is now Cincinnati to determine the boundaries of a parcel of land sold to John Cleves Symmes by the federal government. Symmes had originally tried to purchase two million acres in 1787, but unable to make his payments, the deal was subsequently renegotiated to one million acres. In the meantime, Symmes had begun selling land, thereby resulting in disputed titles. Ludlow was hired to survey the exact boundaries of the Symmes property to assist in clearing conflicting property claims.

Before hired to undertake the surveying for the federal government, Ludlow and three associates had purchased 800 acres from Symmes along the north side of the Ohio River. Working together, the group founded a community named “Losantiville” that by 1790 included approximately 500 residents. It soon became the Hamilton County seat, but the governor of the Northwest Territory disliked the settlement’s name and instead called it “Cincinnati” in honor of the Order of Cincinnatus (Society of the Cincinnati), a patriotic organization established in 1783 by American and French officers who had served in the American Revolutionary War.

Sited on the Ohio River, Cincinnati was a logical endpoint for the Miami and Erie Canal, which reached from Toledo on Lake Erie to Cincinnati, and used the waters of the Little Miami River. The resulting commerce made for a period of rapid expansion, which continued when the Little Miami Railroad was chartered in 1836, also created to connect to Toledo and Sandusky. During the American Civil War, Cincinnati played a key role as a supply source for the Union Army, despite considerable “Southern sympathy” due to long-standing trade and relations with northern Kentucky across the Ohio River.

Cincinnati weathered the depression of the 1930s because of resurgence of relatively inexpensive river trade, and the downtown experienced a renaissance in the late 1920s in part due to the construction of Union Terminal. In the latter half of the 20th century, the city continued to reinvent itself, meeting the challenges of the times.

Cincinnati is home to major corporations such as Procter & Gamble (founded in Cincinnati in 1837), Kroger, GE Aviation, Macy’s Inc., Chiquita International, the United States Playing Card Company, and others, including many large financial groups. Numerous Fortune 500 companies and Fortune 1000 companies make Cincinnati home. The city is also home to the University of Cincinnati and Xavier University, among other institutions of higher learning, including Miami University and Cincinnati State, which boasts the Midwest Culinary School, one of the best in the nation.

Many arts and music organizations also grace the Queen City. However, it was Procter & Gamble which produced and sponsored the first radio soap operas in the 1930s, which were the genesis of a vastly popular variety of drama. When the medium switched to television in the 1950s and 1960s, most of the new serials were sponsored and produced by the company.