Amtrak occupies the former Railway Express Agency building constructed in the 1890s. Both the University of Virginia campus and the bustling downtown are within easy walking distance. 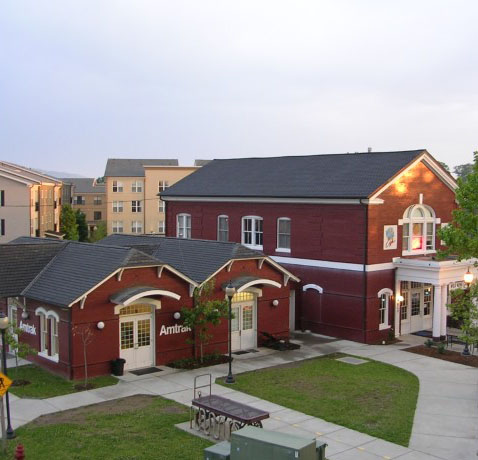 Charlottesville’s Union Station was constructed in 1885 and sits between the University of Virginia and downtown Charlottesville. In 1999, Amtrak and the city of Charlottesville dedicated the newly renovated depot following a $700,000 effort. Amtrak moved out of the original station and into the former Railway Express Agency building built in the 1890s. The new facility has a more modern waiting area, ticket counter and restroom, as well as better parking lot access and the addition of a full-service restaurant. One of the unique features of this station is that its trains serve the station on two separate tracks on either side of the station. The lines cross just south of the building.

Prior to this station’s construction, Charlottesville was a major rail hub, served by many trains daily. The first train service to Charlottesville was operated by the Louisa Railroad Company, which later became the Central Virginia Railroad (later Chesapeake & Ohio, now CSX). In the mid 1880s, Virginia Midland Railroad (later Southern Railway, now Norfolk Southern) created a perpendicular north-south route. This produced competition between the two rail companies and strengthened the local economy. Hotels and restaurants went up along West Main Street for the many new railroad workers, including those at a railcar repair shop.

Charlottesville was formed in 1762 along a trade route called Three Notched Road. The city was home to three of our nation’s presidents: Thomas Jefferson, James Madison and James Monroe. In addition to Monticello, Thomas Jefferson’s home, other nearby attractions include the University of Virginia, as well as the University of Virginia Art Museum, Shenandoah National Park and Skyline Drive.

During the academic session, more than 20,000 students flood Charlottesville to attend the university. The city has grown considerably, with its rich commercial centers and night life.