Sited on the south bank of the Kanawha River, opposite downtown, the neoclassical station was built for the Chesapeake & Ohio Railway in 1905. It houses commercial uses in addition to Amtrak. 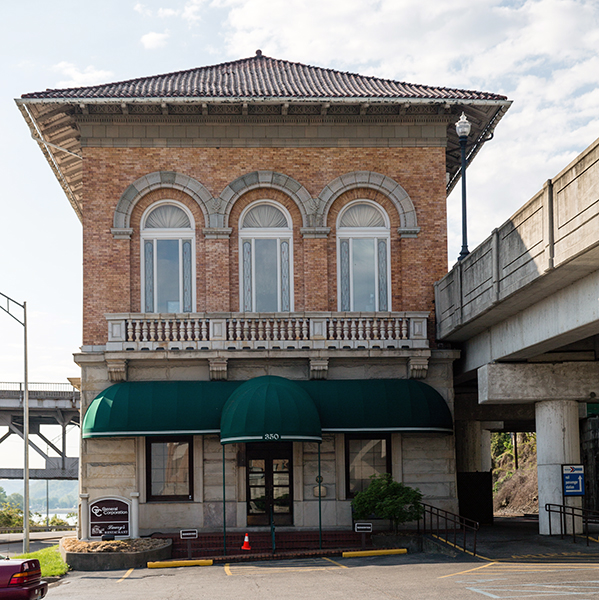 The Charleston station was built for the Chesapeake & Ohio Railway (C&O) in 1905, and sits on the south bank of the Kanawha River, opposite downtown Charleston. The principal architects were J.C. and A.L. Pennock. The station is located at the foot of the South Side Bridge, and the track itself sits at the bottom of a shored-up cut into the hillside along the river. The two-story neoclassical style structure is of blonde brick and stone construction. The façade features a shallow single-story portico of paired Roman Doric columns facing the river. The low hipped, terra-cotta tile-covered roof’s deep eaves are supported with brackets. This building is the only railroad passenger station structure remaining in Charleston. The building was placed on the National Register of Historic Places in 1984 and substantially renovated in 1987. Today, it houses offices and commercial space.

Traders and land surveyors made their way into the Kanawha River valley as early as 1760. To protect the settlers from Indian attacks that were common at the time, Colonel George Clendenin organized a fort on some of his land on the Kanawha. The protection afforded by Fort Lee made the immediate area quite popular, and by 1794 the Virginia Assembly was dividing Clendenin’s holdings into lots. When the town was chartered in 1818, it was named in honor of Clendenin’s father, Charles. The shortened form was recorded, to distinguish it from Charles Town in the northern part of the state.

Natural salt brine wells were discovered along the Kanawha River early on, and the first salt furnace constructed at Malden in 1797. While drilling for salt brine, Captain James Wilson struck the area’s first natural gas well in 1815. Two years later, coal was discovered, and these provided fuel for the salt works. Kanawha Valley salt was a major export from Charleston until 1861 when the market tapered off. However, the need for chlorine and sodium hydroxide, both easily obtainable from brine, revived the industry during World War I.

Along with being a center for state government, as the capital, Charleston also expanded into the 20th century due to the growth of the coal, natural gas, and railroad industries. Modern development post-war has relied upon government, culture, medicine, and service industries. Downtown revitalization efforts have also contributed to post-1980 growth.

The Charleston Sternwheel Regatta was founded in 1970 to showcase privately owned riverboats, and for a time took on the proportions of a major fall festival in the city, being held over Labor Day weekend.