Considered the nation's "first intercity air-rail-ground transportation" facility, the station ushered in a new era by allowing for transfers between air, rail and public transportation services. 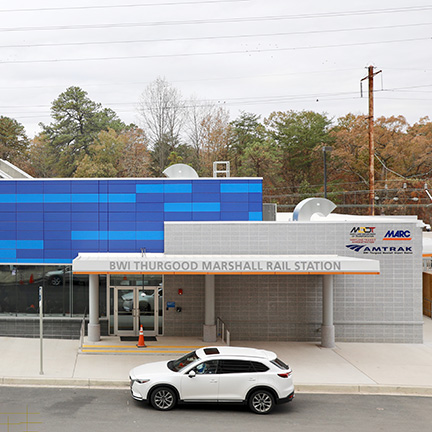 Opened in October 1980, the busy BWI Thurgood Marshall Airport station provides a convenient air-to-rail link for travelers passing through BWI Thurgood Marshall Airport. In addition, it offers connections to regional buses, Maryland Area Regional Commuter (MARC) trains, taxis and a garage with more than 600 spaces. The Bay Runner bus service to Annapolis, the Eastern Shore, Cumberland and Frostburg is also available. Travelers at the station use elevators and an overhead walkway between platforms, and another walkway connects the station to office buildings nearby. Free shuttle buses transport passengers between the station, located at the edge of the airport, and the terminal – 24 hours a day.

The 1980 cast-concrete depot underwent a $4.7 million renovation in 2018-2019 to include installation of a new canopy, three new larger restrooms, ticketing facilities and an updated waiting area with seating, as well as additional improvements to the heating, air conditioning and plumbing systems and the roof.

The building features a base of gray concrete masonry units that ground the structure. Next comes a band of tall windows that wraps around one corner and allows natural light to flood the airy passenger waiting room. Capping the building are rectangular panels set into a grid; through the use of two tones of blue, the panels together create an abstract design that catches the eye.

In late 2010, the Maryland Transit Administration (MTA) re-opened the 1,050-foot platforms, which had been renovated and extended 700 feet, allowing passengers to use all doors of nine-car trains. The MTA also added new signage, lights, shelters and benches as part of this refresh. Under the American Recovery and Reinvestment Act of 2009, the state received $9.4 million in federal funds to provide engineering work and environmental studies to advance construction of a new depot, platforms and pedestrian-access improvements. The grant also supported planning efforts to construct a fourth track in the area to allow for the more efficient movement of Amtrak and MARC trains.

Among U.S. passenger rail stations, BWI Thurgood Marshall Airport holds the special distinction as the first facility built specifically to link rail and air systems, an important milestone in intermodal transportation planning. The U.S. Department of Transportation (U.S. DOT) studied the idea of constructing a rail station on the airport grounds as early as 1969, but nothing immediately came of the concept. A renewed push for the station came in the years leading up to the country’s bicentennial in 1976, during which people were expected to travel up and down the East Coast to attend commemorative programs and events.

In 1976, Amtrak gained ownership of the majority of the Northeast Corridor (NEC) between Washington and Boston, and with federal investment, soon embarked on the Northeast Corridor Improvement Project to upgrade railroad infrastructure. Improvements to tracks, stations, electrical systems, signals and other components were undertaken to modernize the railroad for the next generation and reduce trip times, thereby strengthening intercity passenger rail.

Construction of the BWI Rail Station began in late 1978 and was to include modern ticketing facilities, a passenger lounge and a vending area. Under an agreement with the state, Amtrak oversaw construction of the depot, high-level platforms, overhead pedestrian bridge and track. Maryland provided the land, adjoining parking lot and road access.

Just as the NEC through Maryland was being rebuilt, work progressed at the airport to increase capacity. Dedicated by President Harry Truman in June 1950 and first known as Friendship International Airport, the facility was purchased by the state from the city of Baltimore in 1972. The state concluded a $70 million project in 1979 to double the size of the airport’s passenger terminal.

The official ribbon-cutting for the BWI Rail Station took place on October 23, 1980, before a crowd of approximately 400 persons representing the federal, state and local governments, Amtrak and the airlines. The Severna Park High School Band serenaded guests with musical selections, followed by the dedication at five minutes past noon. Following the speeches and good wishes, the crowd enjoyed refreshments, including sandwiches and pastries, as well as celebratory champagne, provided by the airlines. Attendees could tour the modern cast-concrete depot and then board a bus to see the new airport terminal. An added treat was an invitation to visit the historic Baltimore Inner Harbor, which had become a model for waterfront redevelopment studied the world over. Regular passenger rail service began three days later.

Ridership via Amtrak and MARC grew in the late 1980s when BWI Airport became an USAir/Piedmont Airlines hub, and again in the late 1990s as Southwest Airlines expanded its presence. The station also became a popular MARC stop used by residents in the western Baltimore suburbs, with connections available via local transit and state commuter bus lines. Today, the BWI Thurgood Marshall Airport station no longer holds the distinction as America’s sole air-rail-ground transportation complex, as it has been joined by a handful of similar facilities across the country.

Linthicum, located just north of the airport, was largely rural up until 1908 when the Linthicum Heights district was patented and named for a prominent local family. John Charles Linthicum was a member of the Maryland Senate at the time, and member of the U.S. House of Representatives from 1911-1931. Linthicum became the first to introduce a bill in 1918 which would make the Star Spangled Banner the official national anthem of the United States, though it was not made so until 1931. Linthicum was also instrumental in preserving the sailing ship, Constellation, which can be visited in Baltimore harbor.

Sited three miles south of the Patapsco River and on intersecting rail lines joining Baltimore, Washington and Annapolis, the town is a good example of one built around the electric interurban lines which thrived between 1890 and 1920. Linthicum Heights represents the suburbanization of the county along rail lines at the turn of the 20th century. Primarily residential to this day, the historic district shows a wide variety of building forms and stylistic influences in a quiet small-town atmosphere that contrasts strongly with the enormous metropolitan areas of which it is a part. The MTA Light rail line through Linthicum is built on the right of way of the Washington, Baltimore and Annapolis interurban.

Camp Meade Road runs directly through the center of Linthicum Heights and southwards toward Fort George G. Meade, a large Army outpost with nearly 10,000 residents. The fort is named for General George Gordon Meade, a career Army officer and civil engineer who served throughout the Civil War, and is famous for defeating General Lee at the battle of Gettysburg.

Fort Meade—originally Camp Meade—is today known for its many tenants including the National Security Agency; the Defense Information Agency; a number of national, Army and Navy security and intelligence commands; and the U.S. Army Cyber Command. Fort Meade became an active Army installation when the present Maryland site was selected June 23, 1917, because of its close proximity to the railroad, Baltimore port and Washington D.C. The original cost for construction was $18 million and the land sold for $37 per acre in 1917. Meade has been an active fort since its beginnings, acting as a base of military deployment as well as an intelligence center.