The station, which opened in 2003, is located in the former North Carolina Railroad engine house, the sole remnant of a large railroad maintenance facility built in the mid-19th century. 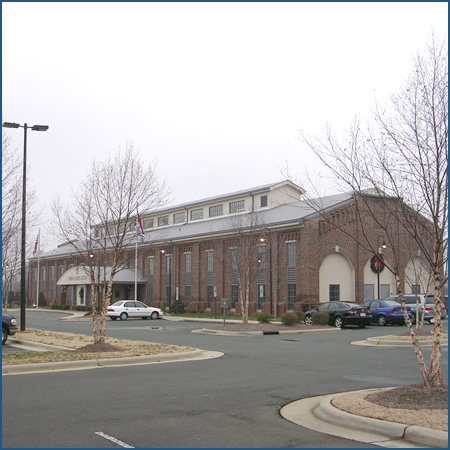 The Amtrak station in Burlington, opened in July 2003, is sited in the former engine house of the North Carolina Railroad (NCRR), the only remnant of a railroad maintenance facility built in the 1850s. The renovated building, which also houses the NCRR Whistlestop Museum in its lobby, as well as city offices, is called the Company Shops Station.

Moser, Mayer, and Phoenix, Architects, created a design to incorporate many of the architectural features of the former engine house and yet make it fit for modern tenants. The barrel roof was removed to recreate the silhouette from the 1800s. A baking soda solution was applied to the soft brick of the building to remove the white paint and revealed detail not previously visible. Overall, this adaptive reuse of the historic property has had a positive impact on the look of the downtown section, according to its residents. It also won an award for excellence from the Main Street, North Carolina division of the state Department of Commerce.

Burlington, in the wooded piedmont of North Carolina, began as the Company Shops. It was founded because the NCRR needed a centrally-located facility on its Goldsboro-Charlotte line, which opened in 1856. The 631-acre site held the principal repair shops for cars and locomotives, homes for workers and officials, company headquarters, a church and a school. The first railroad shops opened in 1857.

In 1871 the Richmond and Danville Railroad (R&D) leased the NCRR for a period of 30 years. The R&D had its own shops in Manchester, Va., and thus the NCRR facilities subsequently lost some of their importance and operated with a reduced workforce.

Due to the changed circumstances, the citizens of the former Company Shops voted to change the town’s name to Burlington in 1887. The R&D was later subsumed into what became Southern Railway, which in 1895 decided to revitalize the maintenance and repair shops while also establishing a new facility in Spencer, N.C. The revival proved short lived, and the Burlington shops were largely empty as the 20th century dawned. Following various non-railroad industrial uses, a fire destroyed much of the complex in June 1918; only the engine house remained relatively unscathed.

Burlington incorporated as a city in 1893 and reinvented itself after the withdrawal of the railroad shops, seeking industry that would make use of the rail connections: textile manufacturing. By the turn of the century, Burlington styled itself the “Hosiery Center of the South.” In the 1920s, the textile business slowed, and to breathe new life into it there, the local Chamber of Commerce supported the organization of Burlington Mills, which would eventually become Burlington Industries, the largest textile manufacturer in the world. When the market for cotton goods fell into depression, the mills switched to rayon and became an industrial giant with that fiber.

Textiles remained prominent in the city even through the depression and with its accompanying labor unrest, and with the building of an aircraft factory in Burlington. However, the severe recession of the 1970s encouraged economic diversification, and a medical diagnostics company is now the largest employer.

The Piedmont and Carolinian services are financed primarily through funds made available by the State of North Carolina. North Carolina station attendants meet all trains at Burlington to assist passengers and answer travel questions.