One of a handful of Amtrak-served stations with a direct airport link, this facility also offers access to Metrolink commuter rail, local buses and rental cars. 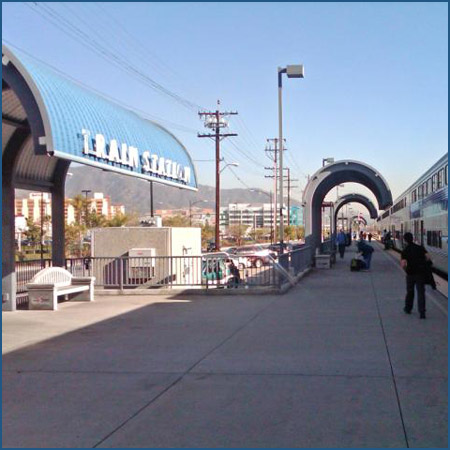 Amtrak and Metrolink passengers share the platforms at the Burbank station. Amtrak began serving this busy location on Metrolink’s Ventura line in 1990 with the San Diegan, the predecessor to the Pacific Surfliner.  The station is adjacent to Hollywood Burbank Airport and across the street from the $112 million Regional Intermodal Transportation Center (RTIC) that opened in 2014. Five years earlier, the Burbank-Glendale-Pasadena Airport Authority had begun a study on expanding the airport rail station into a new transportation center. The project included construction of a four-story structure to house car rental company offices, maintenance facilities and parking spaces; airport public parking and bicycle storage; and a loading and parking area for local buses, charter buses and shuttles. An elevated, covered people-mover connects the RTIC to the airport terminal building.

Burbank and the San Fernando Valley first saw European settlers in the late 1700s. After the establishment of the Spanish mission at San Diego, the governor of Baja California led a party northward toward Monterey Bay that first encountered the San Fernando Valley, where Burbank is located. In 1797, the San Fernando mission was established midway between the San Gabriel and the San Buenaventura missions, as a natural midpoint for the friars traveling on foot. To encourage settlement, the Spanish government made grants of land called ranchos to the Spanish Dons, and Burbank is located on parts of two of these ranchos, San Rafael and La Povidencia. It was not until after the Treaties of Cahuenga and Guadalupe Hidalgo were signed that California became a possession of the United States, in 1848.

Shortly after the treaties were signed, in 1851, David W. Alexander and Alexander Bell, member of the Los Angeles City Council, purchased Rancho La Providencia. Jonathan R. Scott, one of the first Americans to own land in the Rancho San Rafael portion of Burbank, purchased it in 1857 and planted vineyards in the area that contains the main business district of the city today. But it was in 1867 that Dr. David Burbank bought both properties upon moving south from San Francisco. In the mid 1850s, Burbank had come west from his native New Hampshire to practice dentistry in San Francisco, and after the Civil War, moved south to raise sheep, and did so very successfully abandoning his dental practice and taking up investments in real estate in Los Angeles.

Dr. Burbank sold a right-of-way along San Fernando Road to the Southern Pacific Railroad on February 28, 1873, and the first train passed through on April 5, 1875. Ten years later, the Southern Pacific and Santa Fe Railroads waged a price war. For a short time, fare from Kansas City could be had for as little as $1, and this brought many new settlers to the region. Land prices soared and more than 100 towns were founded in a short period of time.

Burbank’s 1920s Southern Pacific depot on North Front Street served passengers until the 1940s, after which it was used, at times, to warehouse toxic chemicals. In 1990, the city was negotiating with Southern Pacific for the purchase of the property to use as the basis of a transportation center. However, in June 1991, the building burned and suffered significant damage. Today, the Burbank downtown Metrolink station, a simple platform with shelters and paved parking, remains on that site.

In 1886, possibly because of a severe drought that hurt his ranching business, Dr. Burbank sold nearly 9,000 acres of his property for $250,000 to a group who formed the Provedencia Land, Water and Development Company, with Dr. Burbank as one of the directors. Land was surveyed, and the town center and residential lots laid out, and in the following year, Burbank was founded. The town was incorporated in 1911.

The railroad, meantime, provided a means for ranchers and farmers to bring their products to market, and a Southern Pacific depot was completed in Burbank in 1887. In the same year, the town’s first factory was opened; however, economic downturn left this building empty until 1917, when the Moreland Motor Truck Company occupied the building and operated for years afterward. Ranching and agriculture gave way gradually to manufacturing such as aircraft parts and tractors. In 1920, the Andrew Jergens Company opened near the railroad tracks, with their only product of the time being coconut oil soap. This household name retained a factory in Burbank until 1992, when the company closed the Burbank plant.

Burbank soon became known for its aircraft manufacturing. The Lockheed Aircraft Company opened its Burbank plant in 1928, and Northrop Aviation came a year later. During World War II, Lockeed’s plant obtained notoriety for its magnificent camouflage during World War II: the entirety of the Vega factory was hidden beneath a complete faux suburb, replete with rubber automobiles, fake trees and shrubs, houses and agriculture.

The motion picture industry arrived in Burbank in the 1920s as well, with First National Pictures obtaining a 78-acre site on Olive Avenue in 1926, including the original David Burbank house. In 1928, National was taken over by Warner Brothers. Columbia Pictures purchased Burbank property as a ranch facility for shooting outdoors, and the Walt Disney Company, having outgrown its Hollywood facility, built a million-dollar facility on Buena Vista Street in 1939. Both Disney and Warner contributed to the war effort by making training and morale films and promoting the sale of war bonds. By the 1950s television came to Burbank with the National Broadcasting Company (NBC), which purchased its studio location in 1951. NBC has remained in Burbank, but has been relocating some operations south to the Universal Studios property, now owned by its parent corporation.

Many motion pictures have been filmed in Burbank, including Casablanca (1942), High Noon (1952), Mary Poppins (1964), Bonnie and Clyde (1967) and Apollo 13 (1995), among others too numerous to mention. The city’s mall, Burbank Town Center, has also been a popular backdrop for movies, television shows and commercials, and the city is still home to many broadcast, video, animation and production studios including some very well known names: the Cartoon Network, Nickelodeon Animation Studios, Central Casting and Starz Network.

The Burbank Airport opened in 1930 as United Airport in the northwestern corner of the city, and has changed names several times since. It became the Burbank-Glendale-Pasadena Airport in 1978 after Lockheed sold it to the three California cities for $51 million. In December, 2003, it was renamed for Bob Hope, the comedian and actor who lived nearby in Toluca Lake, and it took its current name – which provides customers with a better idea of its location – in late 2017.