One of three Amtrak stations serving central Boston, South Station is the northern terminus of the busy Northeast Corridor; locals and tourists alike know the building for its gently curving facade and eagle-topped clock. 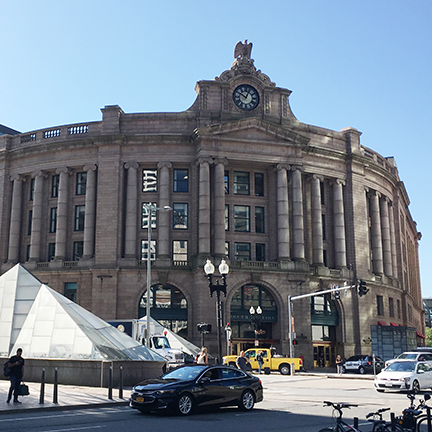 The company floated bonds from 1896 to 1899 and purchased a 35-acre parcel for $9 million, formerly belonging to the New England Railroad. The city itself spent $2 million rerouting streets and utilities and building a 200-foot granite seawall along Fort Point Channel to accommodate and protect the station, as it was close to the harbor. Upon its completion after two years of construction, South Station was the largest railroad station in the world and the largest structure in Boston. It was dedicated on New Year’s Eve 1898 with considerable ceremony, including speeches by the mayor and company president and the building was packed for the celebration.

This five-story Neoclassical Revival-style station was designed by Shepley, Rutan and Coolidge and built by Norcross Brothers. Its elegant entrance looked much as it does today, with three double doors opening to the corner of the crossed avenues, overseen by numerous windows in an elevated colonnade and graced by a monumental clock topped by an eagle with an eight-foot wingspan. The headhouse sits at a diagonal to the tracks, and the train shed covered the passenger platforms to allow indoor boarding of the trains. The waiting room, which could accommodate over 1,500 passengers, was 225 feet long and 65 feet wide. Its floor was decorated with a marble mosaic, and the walls were a combination of polished granite, enameled brick and plaster, illuminated by 1,200 electric lights placed along the walls and coffered ceilings. Light streamed in through great arched windows facing Summer Street to light the headhouse. Railroad offices occupied the floors above the public spaces.

The early station offered a women’s waiting room with complete amenities. In the general waiting area, oak benches were placed to form alcoves. Ornamental kiosks in the center of the room sold confections and flowers, and other retail space offered newsstands and sundries. Forty-five bathrooms offered further convenience, and there was a private telephone exchange and bicycle parking. Railroad employees likewise enjoyed dressing rooms and their own check system for hats and coats, as well as a mail chute with mail sorting room and speaking tubes. From the wide waiting room, passengers had access to a lunch room with 200 stools and counters made from Tennessee marble and mahogany. Upstairs sat a large dining room, a kitchen, and additional serving rooms for private parties and receptions.

For the next several decades, South Station was the busiest terminal in the country, serving nearly 40 million passengers a year. The train shed was demolished and rebuilt in 1930 in a $2.5 million renovation. Over the years, open tracks were walled in from the street and terrazzo floors were added in modernizing the station. Other additions included a new restaurant, ticket office, movie theater and parking garage.

As with other U.S. rail terminals, business slowed post-war, as did maintenance, and by the 1960s, South Station was dilapidated and nearly unused. In 1961 the New Haven Railroad declared bankruptcy. In 1965 the Boston Redevelopment Authority (BRA) purchased the building for $6.95 million. Hope for restoration was short-lived, however, as the BRA envisioned new uses for the site and decided to demolish the facility. Only a year after newly-created Amtrak started serving the station, the BRA in 1972 began removing tracks and portions of the wings. The third floor of the remaining structure was later closed after a fire, and the fifth floor was completely abandoned. The building became home to vagrants.

A group of concerned citizens, outraged at the pending loss of this landmark, succeeded in listing South Station on the National Register of Historic Places in 1975. Demolition was halted while the headhouse and a portion of the waiting room still remained intact. BRA sold South Station to the Massachusetts Bay Transportation Authority (MBTA) in 1978 for $6.1 million, and by 1984, MBTA had begun to restore the station, at a cost of $195 million. Funding was provided by a combination of monies from the MBTA, Amtrak, Federal Railroad Administration, Urban Mass Transit Authority, Equity Office Properties and private development corporations.

The rehabilitation, completed in 1989, included rebuilding part of the headhouse, reconstruction of 11 station tracks with high level platforms, and the construction of a new bus terminal and parking garage over the tracks.

South Station is now the second busiest transportation center in New England, and considered a gateway to Boston’s revitalized financial and retail center. South Station’s restoration has created over six million square feet of office space in the area surrounding the station, which provides a central focal point for the area. The restoration has been recognized by several national and international awards. More than 50 events per year at the station, such as exhibits, concerts, fund-raisers, family-oriented programs, community-oriented programs and the Holiday Train draw the larger community in to support the station and its retailers.

The “Ghost Terminal” under the main concourse makes a curious footnote in South Station’s history. The New Haven Railroad had experimented with electricity as early as the 1890s, intending to install an electrified system into South Station, which already ran with four large generators of its own. This second terminal was designed to handle 25,000 daily commuters with a two-track loop and an elaborate underground depot, complete with men’s and women’s rest rooms and its own waiting room and platforms. However, the first train that arrived was a steam locomotive—and its smoke, sparks, and fumes made the space utterly uninhabitable. An electrical commuter railroad never operated out of this terminal, so great was the discouragement with this opening. During the 1940s, these tracks were removed and a small parking garage and expanded baggage facility with an extension to the post office annex was installed in its place. For a brief time, it was even an employee bowling alley. Today, the space provides office space and storage for MBTA and Amtrak.

South Station is currently the subject of a proposed expansion project led by the Massachusetts Department of Transportation (MassDOT) in coordination with Amtrak, MBTA, the Federal Railroad Administration and other local, state and federal stakeholders. The South Station Expansion Project, funded with a federal High-Speed Intercity Passenger Rail grant, is intended to increase station terminal capacity and related layover capacity in order to meet current and anticipated high-speed, intercity and commuter rail service needs. The expansion will enable growth in passenger rail transportation along the Northeast Corridor (Washington-New York-Boston) and throughout greater New England.

Project highlights include the addition of seven new tracks and four platforms; construction of a new passenger concourse; acquisition and demolition of the adjacent U.S. Postal Service South Annex, which will provide an additional 16 acres to the station site; provision of adequate train layover space; and the extension of the Boston Harborwalk along a reopened Dorchester Avenue.

Amtrak is also coordinating with MassDOT and MBTA on the proposed South Station Air Rights Project, within the immediate station terminal footprint. A mixed-use transit-oriented development led by Hines Development and Gemdale Properties, the project calls for the addition of office, residential and hotel space behind and adjacent to the headhouse.

Boston itself is one of the most storied cities in the United States, its history much entwined with the nation’s origins. The Shawmut Peninsula, upon which the city is situated, was originally connected to the mainland by only a narrow neck of land, surrounded by Boston Harbor and the Back Bay, an estuary of the Charles River. The peninsula, archaeologists have discovered, had been inhabited by natives as early as 7, 500 years before the present. Euro-American settlers arrived first in Charlestown, across the harbor, and the first settlement on the peninsula, begun by William Blaxton in 1625, was called Trimountaine for the three hills there (only an abbreviated Beacon Hill remains today).

In 1630, the Puritans of the Massachusetts Bay Colony signed an agreement with the English Crown and the Winthrop Fleet sailed to the New World, arriving in Boston by way of Salem and Charlestown. The settlement of Trimountaine had its name changed to Boston on September 7, 1630, and Governor Winthrop founded the City of Boston on September 17, naming it after the town of Boston, Lincolnshire, from which many of the settlers came.

The Puritan community of Boston has bequeathed the city its culture of learning, self-reliance and hard work. Boston grew to be the largest settlement in the Colonies and remained so until the 1760s. During the early 1770s, Boston played a primary role in sparking both the American Revolution and the ensuing war with Britain. The city was the site of the Boston Massacre, the Boston Tea Party, and battles such as Lexington and Concord and Bunker Hill. Thus, between revolutionary leaders coming from Boston and the citizen’s fight for rights, the city is sometimes styled the “Cradle of Liberty.”

In the 19th century, the city became one of the world’s wealthiest international ports, exporting products such as rum, fish, salt, and tobacco. Chartered as a city in 1822, by the mid-1800s Boston also became one of the largest manufacturing centers in the nation, noted for garment production, leather goods, and machinery. Manufacturing overtook international trade in dominating the local economy, and the many local streams and rivers not only allowed easy shipment of goods inland but also provided power for many mills and factories.

Following the potato famine of 1845-49, Boston became a haven for Irish immigrants, who have since dominated the culture and leadership of a city that became increasingly diverse in character. Boston was traditionally divided into many ethnic neighborhoods which expanded into the surrounding towns, annexing them. Boston also grew physically not through annexation but through landfill and using two of the three large hills as well as rubble and gravel shipped in to widen the peninsula to its present breadth.

Today, the region’s colleges and universities have a major impact on the city and region’s economy, with students contributing an estimated $4.8 billion annually. Boston’s reputation as the “Athens of America” derives largely from the teaching and research activities of more than 100 colleges and universities in the Greater Boston area, such as Harvard, MIT, Boston College and the University of Massachusetts Boston. Tourism, healthcare, financial services, publishing, printing and four major convention centers also contribute to the economy, as well as its being the state capital and regional home of federal agencies.

Boston South Station is a terminal for MBTA’s Red and Silver lines, inter and local buses as well as Amtrak’s intercity routes.