Standing on the site of a famed Harvey House of the same name, the Alvarado Transportation Center anchors development on the eastern end of downtown and along historic Route 66. 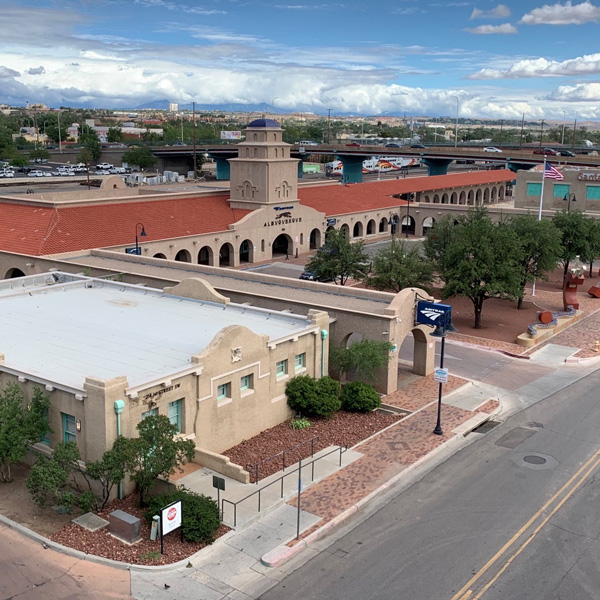 The Amtrak stop is located at the Alvarado Transportation Center (ATC) on the eastern end of downtown Albuquerque. The intermodal transportation facility opened in 2002 at a cost of $7.75 million, replacing the local train station that was destroyed by a 1993 fire. This complex consists of a series of buildings. New Mexico’s Rail Runner commuter trains use one building along with ABQRide, the local transit agency, and since January 2008 Amtrak has shared another building to the west with Greyhound and other intercity bus operators. Another building on the site, formerly used as the Amtrak passenger station, is now a base for Amtrak train crews.

The architectural design of the complex is directly linked to its location in Albuquerque. The ATC stands on the same location as Albuquerque’s original Atchison, Topeka and Santa Fe train station and Alvarado Hotel, a Harvey House property that was demolished in 1970. The ATC’s Mission Revival design was based largely on the Alvarado in order to recreate its look and feel while reminding those who view it of the area’s historical worth. It does feature new additions that distinguish it from its predecessors, such as its large clock tower.

Albuquerque began as a Spanish colonial outpost known as Ranchos de Albuquerque. Officially declared a city of “New Spain” in 1706 by provincial governor Don Francisco Cuervo y Valdes, the town derived its name from an early Viceroy of New Spain known as the “Duke of Albuquerque”.

The town started as a farming community and military outpost, and it was well suited for such tasks as these due to its location along the famous Camino Real. In keeping with the Spanish tradition of city building, Albuquerque was built around a central plaza with government buildings, churches and homes outlining its perimeter. Today, this area is known as “Old Town” and contains museums, shops and cultural offices maintaining the feel of Albuquerque’s origins. Albuquerque was incorporated as a United States city in 1891, and Old Town was absorbed into the area of Albuquerque known as “New Town” where the Santa Fe Railway laid rail lines eleven years earlier.

Albuquerque has the distinction of being New Mexico’s largest city as well as the county seat of Bernalillo County, New Mexico. It is the home of the University of New Mexico, Petroglyph National Monument, Kirtland Air Force Base and Sandia National Labs. The largest hot air balloon festival in the world, the Albuquerque International Balloon Fiesta, is held every October.