The Amtrak facility stands adjacent to the 1905 Santa Fe Railway depot, which was saved from demolition by townspeople in the 1980s and converted into a local history museum. 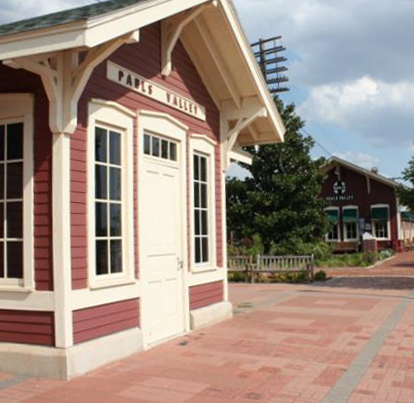 The Pauls Valley Amtrak station is a recently constructed waiting room adjacent to the 1905 Santa Fe Railroad depot. Typical of the Gulf Coast & Santa Fe style frame buildings, the large wooden Pauls Valley depot was served by the Lone Star route until 1979, when that train was discontinued.

The story of how the community saved the depot demonstrates how devoted a town can be to its landmarks: In 1985, the BNSF Railway acquired a permit to tear down the building, but Adrienne Grimmett, then-president of the local historical society, mobilized Pauls Valley citizens to save the depot. In 1989 the city purchased the facility and conveyed it to the historical society to use as a museum, and it was partially restored for that purpose, beginning in 1991. Workers volunteered and businesses discounted or donated supplies for the restoration. Even the Department of Corrections volunteered labor.

When the Heartland Flyer began service on June 14, 1999, the city commissioners approved construction of a new waiting room building next to the depot; however, it took time to construct and the first Heartland Flyer passengers had no official shelter from which to board the train. In 1999, the Oklahoma Department of Transportation provided funding assistance through the Federal Transportation Equity Act for the 21st Century for renovation or construction of new depots along the Heartland Flyer’s route. In June of 2002, Pauls Valley opened its new station. This smaller structure, built to match the original depot in style, incorporates a climate-controlled waiting area and restrooms. A parking lot was also built adjacent to the station.

The Santa Fe depot, which has retained its heritage interior style, continues to showcase the historical society’s collection of photos, memorabilia and pioneer collectibles. Additionally, the Santa Fe 2-8-0 1951, originally built in 1911, rebuilt in 1932, and donated to the city of Pauls Valley in 1995, is on display just north of the depot and is mated up with the red Frisco caboose 593. The depot was added to the National Register of Historic Places in 1985.

Smith Paul, for whose farm Pauls Valley was named, was born in 1809 in New Bern, North Carolina and lived for seventeen years with the Chickasaw of northern Mississippi. When the Tri-Party Treaty of 1837 ceded this fertile land in what would become Oklahoma to the Chickasaw, Paul went with them when they were removed to Indian Territory. He married Ela-Teecha, a Chickasaw woman, after arriving. In 1857, the Pauls settled in the Washita Valley, and their large plantation-like farm gradually became known as Smith Paul’s Valley to the locals. Thus, when the railroad came through in 1887, they shortened the name of the station, a mile north of the original town site, to Pauls Valley. Sam Paul, Smith’s son, had town lots platted near the depot and sold patents to lots fronting the railroad. The town plat was finally approved in 1903, and the town became the Garvin County seat in 1907 during statehood elections—because flood waters at that time prevented the opposing voters from reaching the polling place.

The railroad made Pauls Valley a regional trading spot, and today, as county seat, retail and public administration form the bulk of the city’s economic engine.