In 1890, the Great Northern Railway made preliminary right-of-way surveys through this part of Montana, thereby determining the location of Libby. 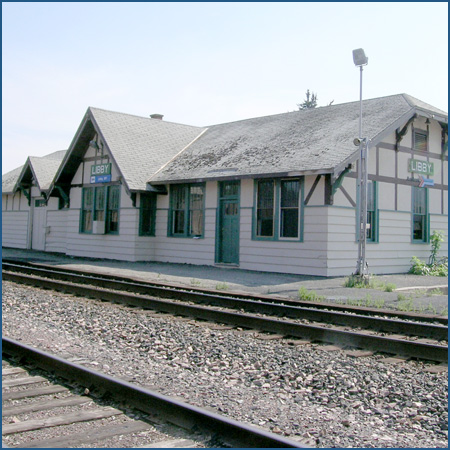 The Libby depot, built by the Great Northern Railway (GN) in the early 20th century, resembles a Swiss chalet. For early regional boosters, this romantic architecture seemed appropriate to the Rocky Mountains, sometimes referred to as the “American Alps”; the style would influence the design of lodges and other buildings in the region’s national parks. The depot features horizontal wood siding on the lower half of the walls and the appearance of half-timbering on the upper portion. The roof, which has clipped gables, includes a large overhang supported by carved brackets that protects waiting passengers from inclement weather. Its design is quite similar to the old GN depot in Cut Bank, Mont.

In addition to a waiting room, a portion of the building is also used by BNSF Railway as a storage/staging area. In 2012, Amtrak improved the station by installing a 550-foot long concrete platform, walkway ramp, wheel-chair lift enclosure, platform lighting and handicap parking stalls.

In 1890, the railroad made the preliminary surveys for its path through this part of Montana and negotiations for rights-of-way were made, thereby determining the location of Libby. The early speculators surveyed and plotted 40 acres into city lots and hired men to clear the timber so that streets and buildings could be built. The first train, hauling passengers and freight, arrived in town on May 3, 1892. The railroad was a significant factor in changing the course for Libby and settling of the West, allowing the easy, economical access that was needed for many more people to come to the area to live and work.