WASHINGTON – In early April 2018, Amtrak led a training program for station host volunteers in Claremont, N.H., which is a stop on the daily Vermonter and an easy jumping-off point for enjoying bicycling, popular wilderness areas and winter sports facilities. The city council created the Ad Hoc Committee for the Claremont Train Stop in 2014 to explore ways to improve and enhance the passenger rail facility, which is located about two miles west of downtown.

The committee’s objectives include increasing ridership, promoting economic development and supporting tourism. After seeking public input and performing site visits, it undertook several initiatives, including installation of Trailblazer signage; increased marketing of the stop; and construction of a new passenger shelter. Local businesses donated all the material for the shelter, and volunteers contributed time and labor to finish the structure. As a next step, the committee decided to set up a station host program. Volunteers will greet train passengers and provide general information about Claremont, regional attractions and Amtrak services.

Nearly two dozen people attended the training session where Amtrak representatives described typical station host duties, Amtrak services and amenities and best practices from other host programs. The Amtrak and Claremont police departments and the New England Central Railroad jointly discussed railroad and grade crossing safety, using Operation Lifesaver videos and tutorials. A few days earlier, the volunteers had organized a round-trip south to Brattleboro, Vt., to experience the train – for some, it was their first Amtrak trip. 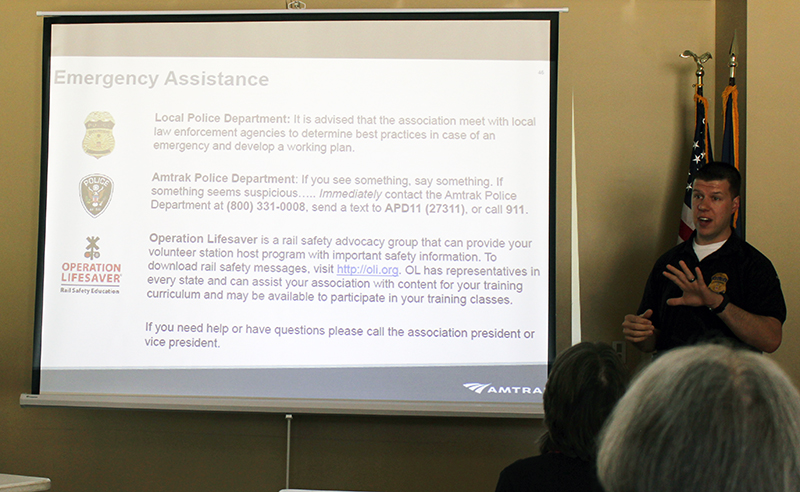 Amtrak Detective Robert Hanson talks about safety around the railroad and at grade crossings.

In 2016, Amtrak published the Station Host Volunteer Manual and case studies for communities interested in setting up their own station host programs. The manual provides an overview of the station host role and responsibilities, safety in and around the station, general Amtrak policies, sample association bylaws and useful draft documents such as a station host application.

If you are interested in organizing a station host volunteer program in your Amtrak-served community, please contact us.